The last six months -- if not the last year -- logged what felt like a decade’s worth of financial news. So perhaps it isn’t surprising that swings that normally would attract an enormous amount of attention have gone almost unnoticed. Like the near-total collapse of private capital flows.

Both private capital inflows to the US and private capital outflows from the US have fallen sharply. They have gone from a peak of around 15% of US GDP to around zero in a remarkably short period of time ... 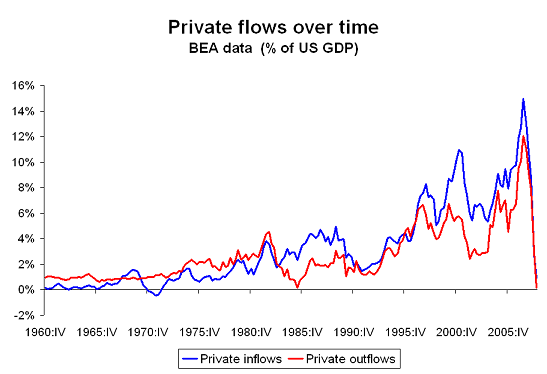 The preceding graph is based on the BEA’s balance of payments data, scaled to US GDP (the quarterly data was transformed into an annual series by calculating a rolling 4q sum and the sign on private outflows was reversed). I did adjust the latest BEA data in one way. From q2 2007 on I subtracted "private" purchases of Treasuries from the "private’ total. The last survey of foreign portfolio holdings -- which revised the data from mid-2006 to mid-2007 -- basically re-attributed all private purchases of Treasuries from private investors in the UK to the world’s central banks. My adjustment thus anticipates the revisions that are likely to follow from the next survey.*

But even if "private" Treasury purchases since mid-2007 are counted there still would have been a stunning fall in private capital flows. Direct investment flows have continued. Other financial flows though have largely gone in reverse, with investors selling what they previously bought. In the third quarter foreign investors sold about $90b of US securities (excluding Treasuries) and Americans sold about $85 billion of foreign securities. And the reversal in bank flows on both sides (as past loans have been called) has been absolutely brutal. 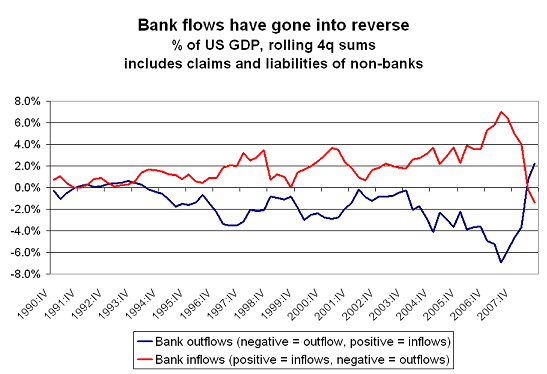 This sharp fall has bearing on the bigger debate over the role global capital, global savings and foreign central banks played in helping to to create the conditions that allowed US households to sustain a large deficit for so long -- and whether American and other policy makers should have paid more attention to the risks that came with the surge in foreign demand for US financial assets earlier this decade.

Back in 2004 and 2005 -- when it was beginning to be apparent that the growth in central bank reserves had led to unprecedented demand for US assets from reserve managers -- many argued that central banks weren’t as important to the financing of the US deficit as it seemed. While net central banks demand seemed large in relation to net private demand for US assets, central banks only accounted for a small share of gross inflows -- and in some sense total foreign purchases of US assets matter more than anything else. Ergo, central bank demand wasn’t central to the ability to the United States’ ability to sustain large current deficits, whether from large fiscal deficits (03-04) or a rise in household borrowing (05-06).

Fair enough. But even then it seemed like the increase in private inflows was tied to an increase in private outflows, so there was a reason why the growth in private flows wasn’t generating much net financing. Note how closely gross inflows and gross outflows move together in the graph -- setting aside the inflows attracted by high US interest rates in the 1980s and the period in the late 1990s when foreign investors really were clamoring to buy US equities. Most of the rise in total flows reflected a rise short-term flows and short-term cross-border bank flows often seem to offset each other. Or to put it a bit differently, the US deficit has not been financed by short-term borrowing from the world’s private banks.

Think of the process this way. Suppose a US bank lends a billion dollars to a bank in London that lends that money to a hedge fund domiciled the Caribbean that buys a billion dollars of US securities. That chain results in an outflow and inflow, but the outflow just financed the inflow -- it doesn’t help to finance the current account deficit. By contrast, China’s purchases of Treasuries and Agencies reflect in large part China’s current account surplus -- not Chinese banks borrowing from US banks. They certainly help to finance the US current account deficit.

It was a largely unregulated system. And it was largely offshore, at least legally. SIVs and the like were set up in London. They borrowed short-term from US banks and money market funds to buyer longer-term assets, generating a lot of cross border flows but little net financing. European banks that had a large dollar book seem to have been doing much the same thing.** The growth of the shadow banking system consequently resulted in a big increase in gross private capital outflows and gross private capital inflows.

Why didn’t the total collapse in private flows lead financing for the US current account deficit to dry up? That, after all, is what happened in places like Iceland -- and Ukraine.

My explanation is pretty straightforward.

Central banks were the main source of financing for the US deficit all along.*** Setting Japan aside, the big current account surplus countries were all building up their official reserves and sovereign funds -- and they were the key vector providing financing to the deficit countries.

And when (net) private demand for US assets fell, official flows picked up. As I noted earlier, private purchases of Treasuries after June 2007 are almost certainly really official flows. If those purchases are added to recorded official flows,**** total official flows over the last four quarters of data (q4 07 to q2 08) now almost match the current account deficit. 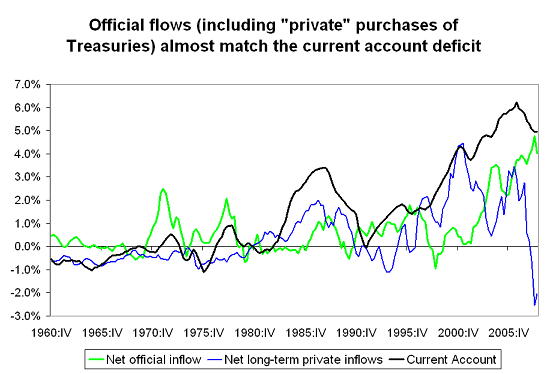 That is true even though I have calculated net official flows -- and in the third quarter of 2008 for the first time in a long time the US central bank was a net lender to the world. Yep. The Fed provided $226 billion of credit through various swap lines in q3, and foreign central banks only bought $118 billion of US assets. This shows up cleanly if official inflows are plotted against official outflows (the graph is done on a rolling four quarter basis). 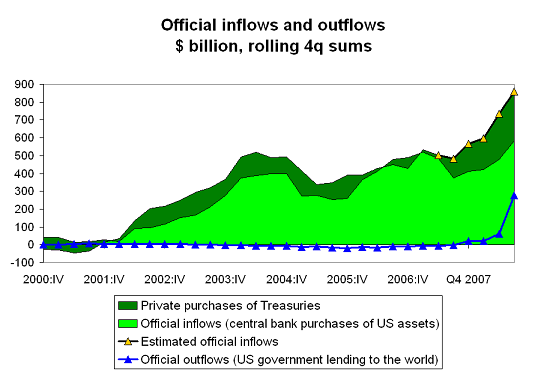 Central banks lent the proceeds of their swap lines with the Fed to private banks abroad, and private banks in turn repaid their maturing dollar debts -- so the swap lines financed the unwinding of existing US loans to the rest of the world. Call it facilitating the unwinding of some of the legacy of the excesses of the past few year. Or call it a new wave of financial globalization, one led by the central banks ...

At this point, I don’t really think that there can be much doubt that the enormous increase in central bank reserves over the last five years was central to the process that allowed the US to run large current account deficits during a period when private demand -- that is private inflows net of private outflows -- for US financial assets wasn’t there. At least not on the scale needed to finance the United States big deficits.

In my judgment, the US housing bubble -- and the associated rise in private consumption as households borrowed against the rising value of their home -- wouldn’t have been able to grow for as long as it did without this inflow from the rest of the world. But that is a story for a different post.

*Watch what happens when the data from the June 2008 survey is released. I would expect a large upward revision in official inflows from q3 07 to q2 08. The BEA data currently indicate $478 billion in official purchases over these four quarters and another $256 billion of private purchases of Treasuries.

** We know this in large part because of how much they have borrowed (indirectly, through their "home" central bank) from the Fed after financing from the interbank market and US money market funds dried up after Lehman’s collapse.

*** In theory, central banks could have bought a lot of euros and private European investors could have bought a lot of US assets, allowing the US to run a large deficit financed by European private investors even in the absence of a European current account surplus. This perhaps happened to an extent -- but it seems to have been less important than central bank purchases of dollar assets.

**** This still likely under counts total official flows. Before they stopped buying Agencies this fall, central banks (especially China’s central bank) also bought Agency bonds from private intermediaries, so the survey tended to revise private Agency purchases down and official purchases up. And even the revised data doesn’t seem to pick up a large fraction of Gulf purchases -- whether purchases of "risk" assets by sovereign funds or "safe" assets by SAMA (the Saudi Monetary Agency) and Gulf central banks.

The central bank flight to safety