The gaps in the U.S. social safety net are about to become very large holes. For the past several years, lawmakers have repeatedly voted to extend unemployment insurance benefits, most recently in February. But in many states those benefits are running out, leaving the long-term unemployed with choices that range from bad to awful.

This moment was inevitable, and should compel Washington to re-think how it supports jobless workers. As my colleague Matthew Slaughter, a former member of the White House Council of Economic Advisers, has explained, the current unemployment insurance system was designed in the 1930s and has remained largely unchanged. It is premised on the idea that unemployment is the consequence of cyclical downturns, and that government’s role is to provide short-term support during recessions for workers who will likely be rehired in the same industries (and usually by the same employer) when the economy recovers.

That system has been inadequate for some time in the face of more intense global competition and faster technological change that has left more workers without the skills they need to find new jobs. The Pew Fiscal Analysis Initiative recently charted historical long-term unemployment (those out of work a year or more). The chart below shows that the problem had already become somewhat bigger over the past thirty years, with the numbers of long-term unemployed remaining higher for longer after each recession. But it really spiked following the recession in 2008-2009, sending the numbers up to record levels of more than 30 percent of all unemployed. 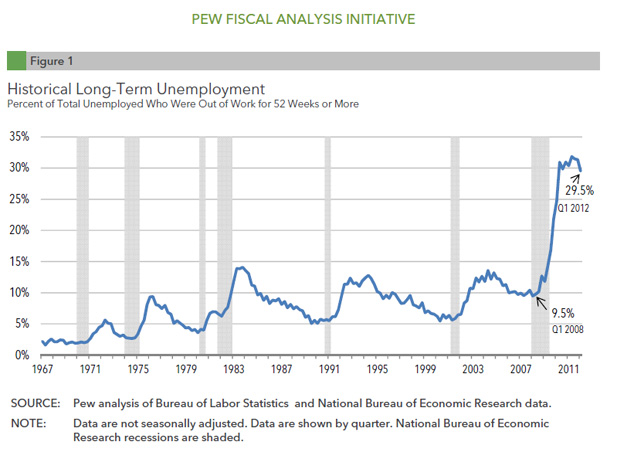 Even that huge figure is understated. The number of workers collecting Social Security disability payments has jumped 22 percent, or some 1.6 million workers, since the start of the recession, taking them out of the workforce or off the unemployment rolls. Nearly all of those will never return to work.

The biggest problem for the unemployed remains sluggish growth and lack of demand. For every available job, there are still more than four unemployed workers, and that gap will not shrink unless the economy grows faster. But the current system does very little to help the long-term unemployed prepare for those positions that are open. There are currently some 3.7 million jobs openings in the United States, a number that has increased steadily since the official end of the recession in 2009.

Their scheme, which was laid out in greater detail in work done with former Bush trade official Grant Aldonas, has four main components:

• A “training stipend” that would be available to every unemployed worker to help cover the cost of retraining.

• Tax deductibility both for companies and individuals that invest in retraining.

• A “wage loss insurance” program that would encourage older workers to find new jobs at lower wages by replacing up to 50 percent of their lost wage income for two years.

The obvious objection to such a program is the cost, but by any reasonable measure it is surprisingly affordable. They estimate the annual additional cost at $22 billion; spending on the current unemployment insurance program is expected to be $99 billion in FY2012, and hit $159 billion in FY2010. The additional proposed spending is small, and looks smaller still if we take into account the big losses to the economy from long-term unemployment, losses felt through reduced incomes, lower productivity, and shrunken output.

Further, they propose a simple, logical way to fund the scheme – replace the current regressive payroll tax in which lower paid workers proportionately bear a much greater burden with a flat assessment of roughly 1.3 percent on all wages. That would be a fairer payroll tax that would actually reduce taxes for lower-wage workers.

With the possible exception of wage loss insurance, which remains controversial, none of this should be all that difficult politically. Liberals would welcome the additional support for unemployed workers, and the scheme would address conservative worries that unemployment insurance discourages people from returning to work. With the political appetite for another short-term fix waning, it is time for a longer term solution.

Can the “Maine Model” Bring the Innovation Economy to the Rest of America?