The March US trade data can be spun many ways. Imports and exports continue to be down substantially relative to last year. The smaller y/y decline in March than in February is a function of the fact that both imports and exports were unusually weak in March 2008 -- which improves the base -- rather that a rebound in volumes this year. But the pace of decline also does seems to have stabilized. 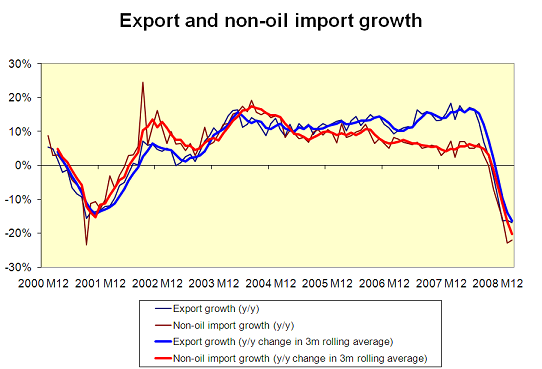 That means that the nominal non-oil balance has improved even as overall trade has contracted. The non-petrol goods deficit was 23.1 billion in March -- up ever so slightly from the $22.8 billion deficit in February. But the non-petrol deficit was around $37 billion this time last year. That is a substantial improvement.

And the petrol deficit is obviously way down.

That means, among other things, that the US is importing far less savings from the rest of the world -- remember, the trade deficit is a good proxy for the total sum the US is borrowing from the world -- than it was a year ago even though the fiscal deficit has gone way up. In other words, the rise in private savings and fall in private investment -- and thus the change in the private sector’s net balance -- has been bigger than the rise in the fiscal deficit.

There is a bit of evidence that the improvement in the trade deficit is close to ending. Calculated Risk’s charts show that the non-oil deficit has stabilzied. The (small) rebound in oil prices means that the petrol bill will soon head up a bit. And if the fiscal stimulus drags up overall US demand, US imports should start rising. If US exports don’t also bounce back, that would imply that the deficit would start to rise as well. 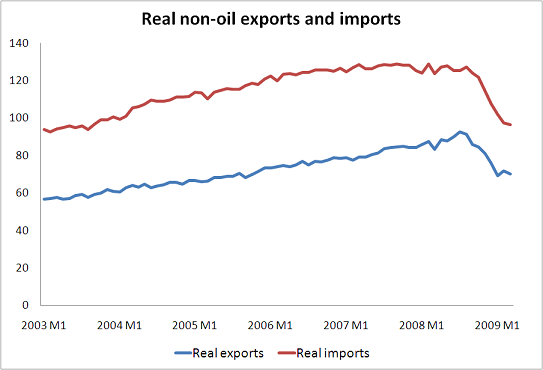 If nothing changes -- or if real imports and real exports start to head up in parallel -- the improvement in the trade balance will be sustained. 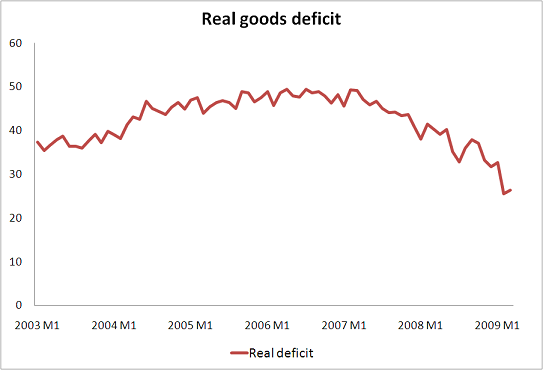 On other interesting tidbit. Lower oil prices haven’t translated into higher oil demand. Prices in 2009 are about half their level at this time in 2008. But total imports -- in volume terms -- are still down by almost 5% in the first quarter.

There has been a lot of talk about how the US now sees eye-to-eye with China but not Europe on the need for stimulus. Yet in a lot of ways, the data suggests that the need for further adjustment in the Sino-American trading relationship still remains much larger than the need for further adjustment in the European-American trading relationship -- in part because a long period of dollar weakness against the euro really did bring the US deficit with Europe down, and in part because Europe’s automatic stabilizers should help to soften the amplitude of the downturn in European demand.

Then again, the impact of different policy responses will be felt more going forward -- and the April data from China provided a bit of good news, namely that the contraction in China’s imports looks to have ended before the contraction in China’s exports. That is good news for the world - as it implies that China’s growth is being driven by domestic demand now, not by exports.

* China’s stimulus also can impact the US indirectly, as say Brazil exports more to China and then imports more from the US.