By hosting the Winter Olympics in Sochi, Russia has brought a surge of international attention to the state of its economy, its interethnic relations, its domestic politics, and its foreign policy. Already much of the scrutiny has become unwelcome.

The staggering $50 billion price tag for the Games highlights official waste, fraud, and abuse. The threat of terrorist attacks reminds the world of the volatile state of Russia’s southern regions and the separatist movements that operate there. Legislation on so-called gay and lesbian "propaganda" calls attention to the illiberal elements of President Vladimir Putin’s governing ideology. The reluctance of many foreign leaders to come to Sochi provides a convenient scorecard by which to evaluate Russia’s global standing.

Corruption, terrorism, human rights protests, high-level no-shows—all these represent ways in which the Sochi Olympics have embarrassed Putin. Yet in each case, the problem goes well beyond any connection to the Games. Each reflects a major tension in the system that Putin has created. And even if all goes well at Sochi, they suggest continuing challenges for the Western effort to create a cooperative relationship with Russia. 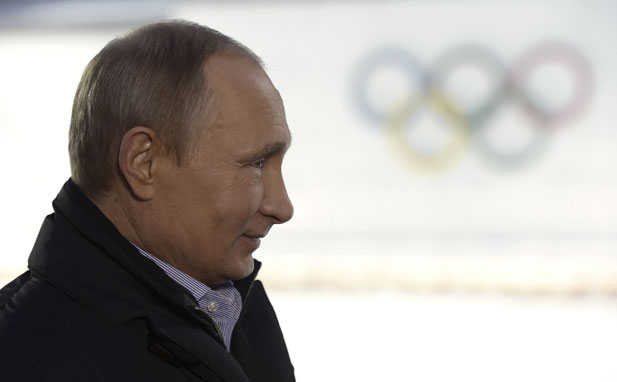 Rapid economic growth has, for many Russians, been the most important achievement of Putin’s tenure. Between 1999, when he became prime minister and then acting president, and 2008, on the eve of the global financial crisis, annual growth averaged 6.9 percent. The impact of the crisis was severe for Russia, but the recovery was also quick. Rebounding smartly, growth in the three years after 2009 averaged 4.1 percent.

Last year, however, the Russian economy slowed significantly. Growth was only 1.4 percent, and the World Bank forecasts only slightly higher growth (2.2 percent for 2014); other forecasts are lower still. If so, Russia will be the slowest growing of the BRICS economies in the year ahead. Inflation, meanwhile, remains relatively high—approximately 6~7 percent in 2013; it is likely to continue at that rate in 2014. And all this has occurred with the price of oil, a key Russian export, still high. In the event of a real drop, economic forecasts become much more negative.

When the slowdown began, Putin sought to deflect blame for it; he traced lower growth to economic difficulties in Europe as a whole. More recently, he has acknowledged that the causes are "internal, not external." Russian economists, businessmen, and officials are now engaged in a debate about how to respond. Among Western-trained experts, the right course has seemed relatively clear-cut: Russia needs market-based solutions that allow more small- and medium-sized businesses to form, reduce the size and power of state corporations, lighten the burden of corruption, and encourage both foreign and domestic investment.

Putin has embraced some of these ideas, but has given few indications that he is ready to change course. Some of his pronouncements have, in fact, had a distinctly atavistic flavor (like his proposal to recreate Soviet-era mechanisms for evaluating national economic competitiveness).

Chechen separatism and associated terrorist activity originating in the North Caucasus have gripped Russia’s attention for two decades. They are a headline-grabber for the Sochi Games too. But the challenge posed by violent extremism may not be the most severe ethnic policy problem Russia faces in the coming decade. That distinction should probably go instead to the growth of a large workforce of immigrants from Central Asia and the Caucasus in Russia’s biggest cities.

With its long-running economic boom, Moscow in particular has been a magnet for jobseekers from the south; estimates of the number of undocumented migrant laborers living in the capital range from one to several million. Although many of them are in fact citizens of the Russian Federation, they are widely seen to be taking jobs from ethnic Russians, engaging in criminal activity, and exploiting social services.

These tensions periodically express themselves in violence, most recently after the October 2013 killing of a young ethnic Russian, allegedly by an Azeri migrant, in the Moscow suburb of Biryulevo. Many Russian commentators called the fighting that followed a "pogrom." More than a thousand migrants were arrested (even though Russians had launched the beatings), and the entire Moscow police force was put on high alert.

Ethnic issues had been a topic of lively debate before the Biryulevo incident, and even some liberal oppositionists have felt obliged to appease popular hostility to migrants. While disavowing the nationalist slogan "Russia for Russians," Alexei Navalny, the best-known new leader of the opposition, said visas restrictions should be imposed on visitors from Central Asia and the Caucasus. Slower economic growth seems likely to increase the demand for such measures.

The huge demonstrations that shook Russian politics are now two years in the past, and in most respects Putin has successfully blunted their impact. No significant new opposition groupings, much less a united opposition coalition, have formed. New laws have been passed to impede the activities of organizations that already exist, especially by trying to choke off foreign funding for civil society. The near-term electoral calendar offers few opportunities for breakthroughs by candidates who want to challenge the near-monopoly of Putin’s party, United Russia. Putin himself does not have to face the voters until 2018, at which point he will be eligible to run for another six-year term.

Despite the seeming lull, however, Russian politics has hardly returned to the status quo prevailing before 2012. The NGO sector remains robust, buoyed by the amnesties of December 2013. Many organizations have worked around legal hurdles to sustain foreign funding. In a series of cases both administrative and civil, Russian courts have actually ruled that NGOs should not have to register as "foreign agents." (The Constitutional Court will take up the issue soon.)

On the electoral front, elections to the Moscow city council offer an opening for opposition candidates to emerge as new leaders in 2014. Democratic activists continue to think that Moscow is fertile ground for them, and Navalny’s strong showing in the mayoral balloting of September 2013 bolsters their claim.

Another opposition victory in 2013 was the election of Yevgeny Roisman, a defector from United Russia, as governor of Sverdlovsk. In the coming year, there will be gubernatorial elections in fourteen other Russian regions. Many of these will not be genuinely competitive contests, but taken as a whole they may test the continued dominance of United Russia as the institutional expression of Putin’s rule.

As for the president’s own popularity, the picture is interestingly mixed. His own approval ratings have improved in the past year, and 68 percent of poll respondents say they would vote for him in a new election today. Only 22 percent, however, say they want him to run again in 2018, and 47 percent want someone else to run instead.

The Sochi Olympics represent a genuine reputational risk for Putin. Damage could be done to Russia’s international prestige in any number of ways—by a terrorist attack, by some major shortfall in the preparation of the Games, by too-rough treatment of protestors, and so on.

Yet this picture of the situation is incomplete in two ways. An estrangement between Russia and leading Western countries has been underway for some time, for reasons that have nothing to do with the Olympics. Moreover, this estrangement has been to a large extent a matter of deliberate strategic choice by Putin. He has sought greater distance from the United States and Europe, and is likely to perpetuate it no matter what happens at Sochi.

That foreign leaders are holding Putin at arm’s length was clear from President Obama’s cancellation of a Moscow visit in September 2013. It was underscored by the cool reception the Russian leader received in Brussels for the EU-Russia summit in late January 2014. For Washington, Russia’s grant of asylum to Edward Snowden was the prime grievance; for European leaders, Russian efforts to block the EU’s relationship with Ukraine were central. How long this set-jaw style continues will be tested four months after the Olympics when Putin hosts the annual summit of the G8—once more in Sochi. (Even if the mood among the leaders improves, the event is certain to produce a new wave of anxiety about terrorist incidents.)

For Putin, social slights by foreign leaders may carry some sting, but he has defined Russia’s aims and identity in a way that downplays what others say and do, and puts a lower premium on international problem-solving. He argues that what makes Russia one of the few truly "sovereign" countries in the world is precisely its ability to pursue its own interests and rebuff outside interference in its affairs. Lately he has given this theme a still more ideological dimension, portraying Russia as a brave holdout against Western decadence.

This "exceptionalist" outlook has resonance in important sectors of Russian society, especially the Orthodox Church. Yet it worries those who want Russia to be a "normal" country, one with modern democratic institutions and social norms. Long after Sochi, Russians will be arguing about whether Putin has advanced this goal—or put it further out of reach.

Stephen Sestanovich is the author of Maximalist: America in the World from Truman to Obama (Knopf, February 2014). He is a senior fellow at the Council on Foreign Relations and professor of international diplomacy at Columbia University’s School of International and Public Affairs.