The Asian Infrastructure Investment Bank (AIIB) has gained a boost with the announcement that at least four Group of Seven countries have agreed to become founding members, drawing surprise and alarm from Washington. The Beijing-backed bank appears to be gaining momentum for its expressed goal of addressing wide infrastructure gaps in Asia. But the bank also reflects Beijing’s dissatisfaction with existing global institutions and its desire to play a leading role in the Asia-Pacific, says CFR’s Robert Kahn. Though it would be a positive step for Washington to join the bank, Kahn says that there is little chance that Congress would approve U.S. participation. 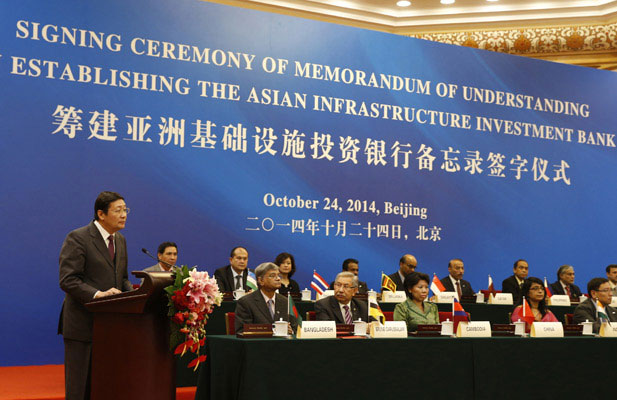 What is the Asian Infrastructure Investment Bank and what are its goals?

The AIIB is a regional international financial institution originally proposed by the Chinese government in 2013 and launched in October 2014. The objective of the bank is to finance road, rail, port, and other infrastructure construction projects. More than twenty countries joined the AIIB at the start, but leading G7 economies, as well as South Korea and Australia, initially declined to join. Over the past several months, more countries have signed on, and with the decision of the UK and three eurozone economies to join, there are now about thirty members. The bank was established with $50 billion in capital, making it roughly one-third the size of the Asian Development Bank (ADB), but that capital is expected to grow to $100 billion as more countries join. The AIIB expects to make its first loan late this year.

"The AIIB is a challenge to the existing global economic order."

While there is broad agreement that there is a critical need for additional infrastructure globally, it is hard to do it. The World Bank and ADB are often criticized for being slow moving and overly bureaucratic. But there is no denying that infrastructure investment in Asia, as elsewhere, is constrained by environmental, social, and economic challenges. Private-sector projects also appear constrained by legal and commercial considerations. Though there is a clear case for public provision of infrastructure—“public goods”— budgets are stretched and standards, including important environmental ones, limit governments’ capacity to respond.

The Chinese-led AIIB hopes to do infrastructure better, while also pledging to work closely with other institutions. Still, there is little doubt that the initiative also exposes Chinese frustration with global institutions, the failure of these institutions to reform to provide a greater voice to emerging powers, and the United States’s inability to pass International Monetary Fund (IMF) quota reform. From this perspective, the AIIB—along with its companion BRICS bank [comprising Brazil, Russia, India, China, and South Africa]—is a challenge to the existing global economic order and a clear statement of intent from China that it desires to play a leading role in defining new rules of the game for investment in Asia.

Why is the decision by four G7 economies to join the bank significant?

In the fall of 2014, the U.S. government caught many by surprise when it made an aggressive and public effort to persuade countries not to join the Beijing-led institution. The United States clearly had concerns about the economic and political implications of a new multilateral lending agency led by China, and in any event, it was highly unlikely that the U.S. Congress would approve a financial contribution allowing the United States to participate. The Obama administration’s efforts led a number of countries to hold back from signing on the the AIIB. The decision by the UK, and subsequently, France, Germany, and Italy, to participate is therefore significant not only because they will be major shareholders, but also because the decision by traditional U.S. allies signals that Washington is increasingly isolated.

What motivated these countries to back the AIIB?

The decisions by these European governments reflect the belief that it would be better to be a participant in the Beijing-backed bank to ensure that its operations are consistent with the work of other international organizations rather than remain outside the tent. It also signals a growing hope that the new institution could spearhead collaborative projects with other multilateral organizations and that some of the initial concerns about the AIIB’s internal governance have been addressed. Nonetheless, the United States first expressed disappointment with the UK decision, stating: “We are wary about a trend of constant accommodation of China, which is not the best way to engage a rising power.” But on Tuesday, Washington played down its tough stance and stated that each government was free to make its own decision vis-à-vis the bank.

The bank is now composed of about thirty member states, yet the United States, Japan, and South Korea—all prominent actors in the Asia-Pacific—are not among them. What are their reservations?

There has been broad concern that the AIIB would have lower standards for projects or would choose to invest in projects based on Chinese political objectives, something the Chinese government has denied.There has been additional concern that the new funding agency represents a challenge to existing institutions and a fraying of global governance. But now there is little doubt that the United States is in the minority in its opposition to the bank.

Does China’s guiding role give it an effective veto over the bank’s decisions?

The AIIB’s voting structure, like that of other regional banks, gives China a strong voice as its leading shareholder. The United States has argued that China will have an effective veto on decision-making, a charge denied by the Chinese government.

What are the implications of the establishment of the AIIB for other multilateral financial institutions?

The jury is still out whether the AIIB will be complementary to or competitive with other existing international financial institutions. Initially, it would make sense for the AIIB to cofinance projects with the World Bank and ADB, if agreements can be reached. The World Bank endorsed the creation of the AIIB despite initial reservations, and in October 2014 it created a new global investment facility (GIF) to boost funding opportunities for developing nations in a bid to fill infrastructure gaps. The GIF could make partnering with institutions like the AIIB easier.

"The jury is still out whether the AIIB will be complementary to or competitive with other existing international financial institutions."

While there is a great deal of energy behind the AIIB, it’s hard to imagine it scaling up quickly without risking a major weakening of standards, poor project selection, or capture by borrowing countries. A successful AIIB will require in-house expertise, on-the-ground capabilities, and a strong-enough governance structure to resist pressures in the borrowing and investing countries to support favored projects. We will have to wait and see if the AIIB can collaborate effectively with the World Bank and ADB while avoiding fragmentation.

My colleague Elizabeth C. Economy has an excellent blog post on the issue, making a compelling case that it’s time for the U.S. government to shift course. While I agree with her on substantive grounds, I have a great deal of concern about the consequences of heading down the path toward membership.

First of all, it’s extremely unlikely that Congress would approve U.S. participation in and a financial contribution to a Chinese-led bank. To date, Congress has been unwilling to approve a much less controversial IMF reform package, and the Obama administration’s efforts to negotiate a Trans-Pacific Partnership will require whatever political capital the administration can muster on international economic issues.

Even if Congress were to consider the bill, there would be a substantial risk of congressional add-ons, such as enforcement of penalties against countries found to manipulate their curriencies for competitive advantage, that would make the bill unacceptable to the Obama administration. It would be a black eye for the administration for to the United States were to join the bank and then not deliver on its commitment.  The best course for the United States is to back away from opposition to the AIIB, allow others to join, and let the bank rise or fall on its own merits.

Any economy that saves 45 percent of GDP will tend to run a current account surplus, China included. Keeping its current account surplus down takes extraordinary (though largely off-budget) fiscal effort. And faster financial account liberalization almost certainly would result in a depreciation and push China back toward surplus.

The Trump administration has made bold gestures in support of Taiwan, including more frequent movement of U.S. ships in the Taiwan Strait. They come at a time of growing anxiety about the U.S.-China relationship.

Trump's Foreign Policies Are Better Than They Seem

President Donald J. Trump’s actions have often been rash, ignorant, and chaotic. Yet some of his individual foreign policies are substantially better than his opponents assert.