Robert S. Litwak, a leading scholar on Iran and North Korea, believes that rather than seeking the overthrow of the North Korean and Iranian regimes, the United States should update the containment policy first put forward by U.S. diplomat George F. Kennan at the end of World War II. He concedes that "this prescription is really making the best of a bad set of options," but says that such an approach is warranted at a time when North Korea has already tested nuclear weapons "and an early rollback is unlikely" and a rollback of Iran’s nuclear capabilities "is also unlikely." Litwak speculates that one way to ease the current North Korean crisis is for China to revive the Six Party talks, which were last held in 2008. 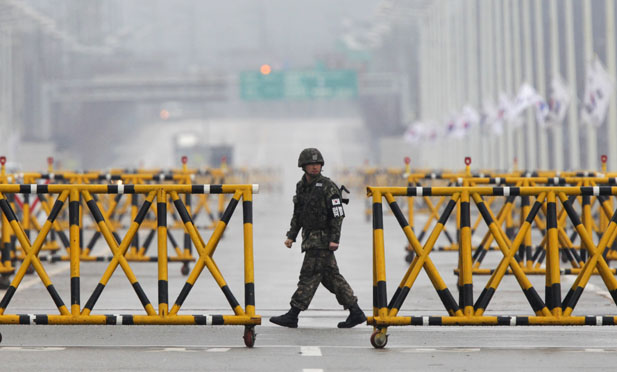 In your newest book, Outlier States, you assert that the best way to deal with North Korea and Iran is a "retooled, updated version of Kennan’s strategy of containment that would decouple the nuclear issue from the question of regime change and rely on internal forces as the agent of societal change." Let’s start with North Korea: Aren’t we already following such a policy?

Our current policy toward North Korea would fall under the containment rubric. But let me provide context. The Obama administration has referred to North Korea and Iran as "outliers," a departure from the George W. Bush moniker of "rogue state." "Rogue" connoted a state that was beyond appeal, essentially irredeemable, and fed into the argumentation that led to the Iraq war. By contrast, the Obama administration moved toward the term "outlier" as a calculated departure, communicating to Iran and North Korea that there was a pathway for them to rejoin the community of nations if they came into compliance with international norms. The dilemma in dealing with both North Korea and Iran is that the nuclear and societal evolution timelines are not in sync. So I advanced a retooled policy of containment as a way of managing this tension, especially since North Korea has now tested nuclear weapons and an early rollback is unlikely. And in the case of Iran, which has demonstrated its mastery of the nuclear fuel cycle that opens the door potentially to nuclear weapons production, a full rollback of its nascent nuclear capabilities is also unlikely. So, this prescription is really making the best of a bad set of options.

"An advantage to indigenous change is that it is more organic and legitimate, but the dilemma in Washington is that we can’t allow some indeterminate societal change timeline to play out while Iran moves toward nuclear weapons capability."

Jumping now to Iran: President Obama announced in a 2012 speech to AIPAC his "no containment" policy toward Iran. Israel doesn’t want to see Iran develop nuclear weapons potential, so the United States is saying that if Iran gets close to a nuclear weapons capability, it would attack Iran if a negotiated solution is not found. Is that the way you read it?

Yes, that formulation really captures the dilemma and the nuanced differences between the Israeli and the U.S. positions. But President Obama’s statement, as well as the broader eschew of the term "containment" in the U.S. policy debate, reflects the[negative] connotation that the term has taken on recently. Namely, containment is now perceived as acquiescing to Iranian acquisition of nuclear weapons and then deterring their nuclear weapons with our nuclear weapons. [In contrast,] Kennan [saw containment] as a broader strategy about how [outside actors] can affect an internal process of domestic change. If in 2003, the United States set a precedent for change through the invasion of Iraq, that model of change is not a possibility in the case of Iran. So therefore you’re looking more to domestic sources of change (as Kennan did in the case of the Soviet Union), and part of the challenge for the United States is how can we shift the calculus of decision-making within Iran so that potential forces of change can come to the fore and bring about a favorable evolution of Iranian society.

And how do you do that?

Kennan talked about ratcheting up external pressure while the contradictions of Soviet society played out over time. An advantage to indigenous change is that it is more organic and legitimate, but the dilemma in Washington is that we can’t allow some indeterminate societal change timeline to play out while Iran moves toward nuclear weapons capability. The Israelis, for understandable reasons, would like preventive action to block Iran even from having the potential to create a nuclear weapon, which would call for military action to deny Iran the nuclear weapon option that’s inherent in its ability to enrich uranium. President Obama has focused on weaponization, which is further along the technological continuum and would push off that point of potential military action.

Ayatollah Ali Khamenei keeps saying that Iran has no intention of developing nuclear weapons. I guess the Israeli concern was fueled by President Mahmoud Ahmadinejad’s comments about wiping Israel off the face of the earth early on in his administration. What if the Iranians came out with a more peaceful formula for dealing with Israel?

"What can one say about Iran’s nuclear program? It is persistent, it is determined, but it is not a crash program to get a nuclear weapon as quickly as possible."

It’s evident in the case of Iran, if one reads the top Western Iran watchers’ analyses, that the Iranian regime views what it does and projects beyond its borders as a source of domestic legitimation, and that plays out in a variety of contexts including the Israeli-Iranian dynamic. Iran under the Shah had cordial relations with Israel. But the rhetoric of Iran does call into question its foreign policy intentions--as an Israeli friend of mine puts it: Iran can say "death to Israel" or develop nuclear weapons, but it can’t say "death to Israel"anddevelop nuclear weapons. What can one say about Iran’s nuclear program? It is persistent, it is determined, but it is not a crash program to get a nuclear weapon as quickly as possible. Indeed, Iran’s nuclear intentions predate the Islamic Republic. The reason that Iran’s actions are understandably viewed with alarm is the character of the regime. But the Islamic Republic does not face an urgent existential threat that would require weaponization in the short term. Its current capabilities--that is, maintaining this hedge option to create a nuclear weapon if it wishes to, but not explicitly crossing the line of weaponization--may indeed be Iran’s strategic sweet spot, enough to signal outsiders that it has a nuclear card it can play but doing nothing that’s so overt that would lead to a dire action against it by the international community or stimulate a kind of a broad coalition within the Gulf region to balance Iranian power.

Your book came out just as Kim Jong-un took power. How do you figure him? Why is his regime now issuing almost daily war-like threats?

There’s a long history of not only North Korean brinkmanship, but provocative actions going back to the attack at the South Korean Blue House in 1968, a terrorist operation that killed South Korean cabinet members in Burma in the ’80s, and, more recently, across-the-border shelling and these provocative nuclear weapon and missile tests. So there’s a history of North Korean brinkmanship. Let’s keep it in perspective. North Korea has a GDP that has been estimated at $40 billion--and that’s a hard number to [verify] given the character of the North Korean economy--juxtaposed against $15 trillion in the United States, let alone Japan and South Korea. North Korea is essentially a failed state with nuclear weapons, and it commands our attention with this one card that it can continue to play. In the past, is has used this card as part of a negotiating strategy to shake down the outside world for assistance, to prop up the regime. The additional overlay in the current crisis--and it’s not a complete surmise, but it’s largely surmised because of the character of the North Korean society and decision-making within the regime--is that the new, young, untested leader does not have the charisma of his grandfather, and this external threat is a useful mechanism to bolster his domestic political position. That would be the logical surmise, but we don’t know.

And I guess we won’t know until this threat has subsided or something substantial happens. In the George W. Bush administration, there was a very active diplomacy on North Korea with the Six Party Talks. The Obama administration has not resumed these talks. What happened there?

It was a reflection within the Obama administration that there were only limited opportunities to make substantial progress. Obama came to office with a commitment to engage "rogue" states, which he repositioned by referring to them as "outliers" and offered them a structured choice with a significant upside and penalties for noncompliance. And that engagement strategy, the hand that Obama extended to North Korea and Iran in his first inaugural address, was rebuffed. That is the situation that we’re in right now.

"In the case of the current North Korean crisis, one plausible way out would be if the Chinese reconvened the Six Party Talks as a way of breaking the political impasse."

In the case of the current North Korean crisis, one plausible way out would be if the Chinese reconvened the Six Party Talks as a way of breaking the political impasse. It would be a question of under what conditions North Korea comes back. (North Korea’s now declaring itself a nuclear weapon state, which the international community emphatically rejects.) That’s a realistic near-term agenda--again, while the societal change timeline plays out, North Korea can only maintain its economy through direct subventions from China, and the Chinese have indicated growing impatience with North Korea. In the past, Chinese leaders have urged North Koreans to follow the Chinese model of domestic economic reform, but the bind for the North Korean regime and the Kim family, the dynasty that has ruled North Korea since the end of World War II, is that the very process of integration into the global economy is viewed as a threat to regime survival.