Skip to main content
Apple's European Tax Bill: Time to Pay Up and Play by the Rules

Apple and its allies in the U.S. Treasury and Congress would have you believe that this week’s ruling by the European Commission that the company must pay some $14.5 billion in taxes owed to Ireland and other governments is an assault on one of America’s most innovative and successful companies.

In fact, the case is not really about Apple at all – it is about Ireland and other governments, both national and local, that are willing and eager to offer whatever tax breaks and other subsidies are needed to attract corporate investment. That is the very definition of a global “race to the bottom.” and it is a big problem not just for Europe but for the United States and the world. The U.S. government should be standing with Europe on this issue, not against it.

The background of the case is both complicated and simple. It is complicated because of the byzantine series of tax maneuvers that Apple undertook to ensure that it paid a tax rate on its European profits that, according the European Commission, fell from just 1 percent in 2003 to a mere 0.005 percent in 2014. Ireland eagerly facilitated these maneuvers in order to encourage investment by Apple, which has created about 6,000 jobs in the country. Disentangling Apple’s tax planning was no easy task – a Senate investigation in 2013 ran into hundreds of pages describing such exotic tax dodges as the “double Irish with a Dutch sandwich.”

But it is also simple because Apple is doing what every other well-managed company in the world is doing – trying to maximize its returns by minimizing its tax bill through whatever legal means are available. The scofflaw here is not Apple, but rather Ireland. Its economic growth strategy is built around attracting investment by mobile multinational companies by offering rock-bottom corporate tax rates, and then aiding and abetting when companies scheme to lower their tax bills still further.

The result of such behaviors by many governments is that corporate tax payments have been falling sharply around the world. Ireland’s headline tax rate of 12.5 percent is a fraction of the U.S. top rate of 35 percent, but corporate tax rates have been falling almost everywhere in the world. In the 1980s, the United States had one of the lowest statutory corporate tax rates among the advanced economies; today it has the highest. And the actual rates paid by companies are far lower. That leaves more of the bill for schools, roads, fire, police and the military to be picked up by individual taxpayers. 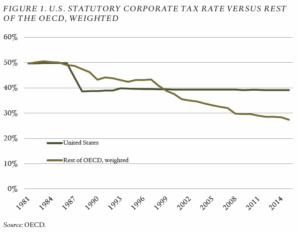 For the United States, it has become extremely difficult for the government to tax the foreign profits of big corporations at all. As we showed in our recent book How America Stacks Up: Economic Competitiveness and U.S. Policy, roughly one-quarter of all foreign profits are reported in “tax haven” jurisdictions like Ireland. And U.S. tax law is structured so that no tax is paid to Uncle Sam as long as the profits are held offshore – Apple alone has currently parked more than $200 billion outside the United States, and U.S. corporations collectively are holding more than $2 trillion overseas. 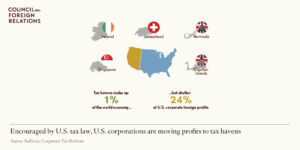 Where does the U.S. interest lie here? According to the U.S. Treasury, in a statement this week, the ruling “could threaten to undermine foreign investment, the business climate in Europe, and the important spirit of economic partnership between the U.S. and the EU.” It has pledged to flight the decision. Apple itself has accused the Commission of trying to “rewrite Apple’s history in Europe, ignore Ireland’s tax laws and upend the international tax system in the process." Both Apple and the Irish government are appealing the ruling.

Certainly the U.S. government should be trying to encourage successful companies like Apple, and to advocate for them if they are faced with discriminatory practices abroad. But the Treasury is also responsible for the budget of the U.S. government, which means ensuring that all taxpayers – including U.S. corporations – are paying a reasonable share of tax. Apple’s maneuvers mean not just less tax paid to European governments, but less tax collected by the U.S. government as well.

The issue is a classic collective action problem. All governments in the world (including many U.S. state governments which similarly lavish tax subsidies on big companies) would be better off with common rules that discouraged such practices. But in the absence of rules, each government has an incentive to try to cut its taxes ever lower and to offer special tax holiday in order to attract job-creating investment. That leaves corporations wealthier, while governments – and the public services they provide – grow poorer.

As I argue in my forthcoming book Failure to Adjust: How Americans Fell Behind in Global Economic Competition, the absence of agreements restraining these sorts of investment subsidies is the biggest hole in global trade rules. The United States and other countries have negotiated all sorts of binding international arrangements – including the controversial Investor-State Dispute Settlement provisions – that prevent governments from discriminating against foreign investors. But there are essentially no rules to prevent governments from offering sweetheart tax deals and other subsidies to attract corporate investment, even though such subsidies violate free market principles and badly distort investment decisions.

The European Union has done more than any other entity to try to enforce some common rules. Its “state aids code” spells outs clearly that member governments are forbidden from offering the sort of selective tax treatment that Apple appears to have received. The goal is to create a level playing field for all European countries that are similarly trying to attract investment. Those rules make it fairer for companies as well, especially small ones that lack Apple's ability to negotiate special deals.  As the Commission wrote in its ruling on the Apple case, the special treatment it received in Ireland “gives Apple a significant advantage over other businesses that are subject to the same national taxation rules.” Ireland is not alone in having violated those rules – the Commission has also gone after Luxembourg, Belgium and the Netherlands over tax breaks for companies such as Fiat and Starbucks.

Instead of bashing Europe, the United States should be standing with the Commission in trying to build better global rules for tax competition – such as through the OECD’s Base Erosion and Profit Shifting (BEPS) initiative – and then ensuring those rules are vigorously enforced. As the global champion of free markets, the United States should be out in front in trying to ensure that investment goes to those places that offer the best opportunities for successful businesses rather than allowing companies to be lured by competition-distorting subsidies.

There is a final irony in the U.S. position on the tax issue. The Obama administration – which is hoping to pass the new Trans-Pacific Partnership (TPP) trade agreement and to negotiate a similar deal with Europe – has been pushing back against the arguments of trade critics that such deals weaken national sovereignty and may endanger national consumer or product safety regulations. Certainly, global arrangements can tie the hands of national or state governments, sometimes in unwanted ways. Apple has seized on that argument by accusing the Commission of “striking a devastating blow to the sovereignty of EU members states over their own tax maters.”

But what opponents of these trade deals and other international agreements miss is that they can also prevent governments from doing stupid things that harm the interests of their citizens – like eliminating taxes on wealthy corporations to attract investment or raising protectionist tariffs to serve some narrow corporate agenda.

The EU ruling this week was a small blow against stupid, self-defeating government policies. The United States should be applauding.

This article originally appeared on LinkedIn.com.

How to Fight Secular Stagnation