Skip to main content
The Great Recession and Trade Protectionism: What Went Right?

There has already been extensive analysis of the mistakes in finance, real estate, and regulation that came together in 2008 to produce the worst recession since the Great Depression of the 1930s. But there is also a compelling story to tell about what went right in the policy response.

They estimate, based on pre-crisis evidence, that the deep recession should have caused the United States and EU to impose measures restricting an additional 15 percent of non-oil imports--or about five times as much import protection as existed at the start of 2008. Instead, protectionism was the dog that did not bark during the recession. The United States imposed sixteen times fewer import restraints than the models predicted, and the EU eight times fewer. By the end of the recession, total import protection had increased by only 1-2 percent of non-oil imports, as opposed to the 15 percent that had been forecast. The chart below shows the gap between prediction and reality based on the number of products covered by temporary trade barriers. 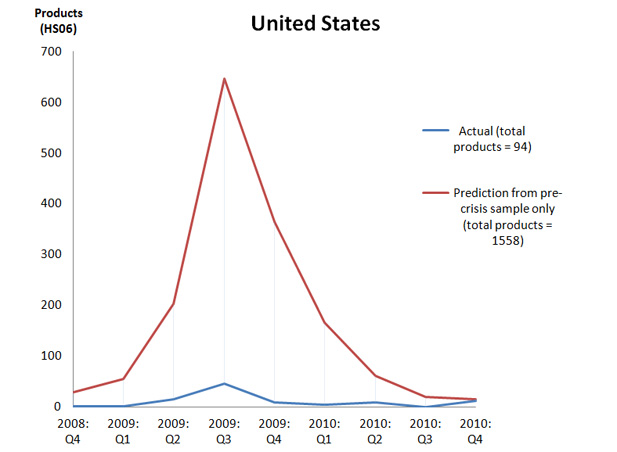 That lack of protectionism has been tremendously beneficial to the United States. Exports have provided fully half of all U.S. economic growth since the end of the recession in 2009. U.S. companies have been able to restructure and raise productivity more rapidly than many of their competitors, and exports have been aided by a relatively weak dollar. If those companies had faced new trade barriers abroad--a certainty if the United States had resorted to protectionism at home--the U.S. recovery would have been weaker than it has been.

What went right? Bown and Crowley’s work is only the first cut at an answer, and they suggest several important nuances. They note that, unlike in past recessions, most of the new trade restrictions imposed by the United States and Europe were aimed at faster growing markets in the developing world that were more shielded from the downturn, rather than at other hard-hit developed countries. And the depreciation of the dollar and euro after initial spikes at the start of the crisis probably helped tamp down pressure to impose specific new import barriers by generally raising the cost of imports and lowering the cost of exports.

But the more interesting answers may lie in the worlds of politics and business. The Great Recession was the first deep recession in the advanced economies since the creation of the World Trade Organization in 1994. Did the existence of the WTO, which makes it harder to restrict imports, play a key role in constraining protectionism? It seems likely that it did.

At the onset of the recession in 2008, the leaders of the G20, fearing a repeat of the 1930s, declared “the critical importance of rejecting protectionism and not turning inward in times of financial uncertainty.” While the G20 has fallen short of expectations in many ways, that pledge may well have been a crucial intervention at a key time.

Business likely played a role as well. U.S. and European companies are now far more global than they were during the recessions of the early 1990s or early 1980s. Protection is usually a result of governments responding to petitions from companies facing import competition. But increasingly companies are reluctant to use these tools, recognizing that the gains they may realize in one country will be losses in another.

And perhaps this is a genuine case of collective learning. The lesson that the Great Depression was prolonged and deepened by “beggar-thy-neighbor” policies has been absorbed by generations of political and business leaders. Faced with the worst economic crisis since the 1930s, that lesson seems to have stuck.