Does the large drop in the U.S. labor force participation rate justify a monetary policy that is easier, for longer, than suggested by our models or the Fed’s current description of its policy?  Chris Erceg and Andy Levin, two senior researchers at the Fed now on leave at the IMF, argue yes.  Their analysis will provide fuel to the monetary policy doves who argue the Fed is failing to meet its employment mandate, and points to a battle ahead.  But it doesn’t really settle questions about whether monetary policy is an effective tool for bringing these workers back into the work force, or whether it can be done without creating inflationary pressure (which speaks to other leg of the Fed’s mandate). Still, their paper is an important read.

Their first chart shows the decline in labor force participation since 2007, both in absolute terms and relative to a Bureau of Labor Statistics (BLS) forecast for the future path of the participation rate made in 2007.  It suggests that the sharp drop in the participation rate since 2007 was unexpected and hard to explain by the structural factors that affected participation in the past such as the aging of the population, or shifts in specific groups such as female or youth workers.  This means that the gap between the two lines, the "participation gap," must be cyclical--the result of the great recession--or because of some new structural factors that the BLS didn’t anticipate. 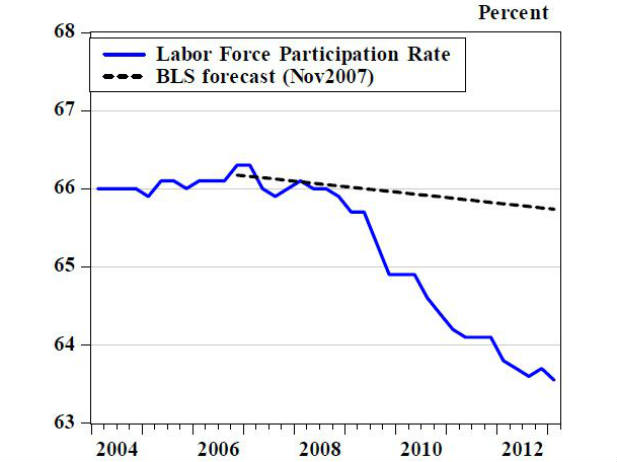 The structural argument deserves some elaboration.  Recall that labor force participation actually peaked around 2000 and was on a downtrend even before the great recession (see next chart). One view is that this means there are even more "missing workers" put out of jobs, involuntarily, by the weak recovery of 2000-07.  I think a better explanation is that there were already structural changes underway in the workforce that are not captured by the BLS forecast.  From this perspective, the great recession is an accelerant that forces change (eg, in terms of labor-saving by firms, changes in long-term competitiveness, or changes demand for skills) that had been building already.  Whether you want to describe this as cyclical or structural, these workers may not be easily brought back into the labor force through expansionary macro policies. 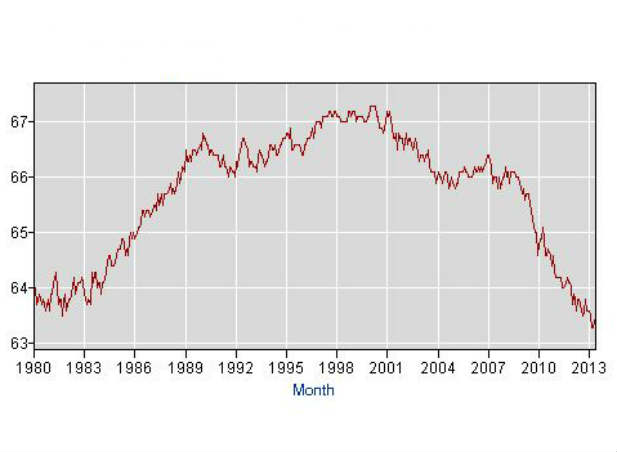 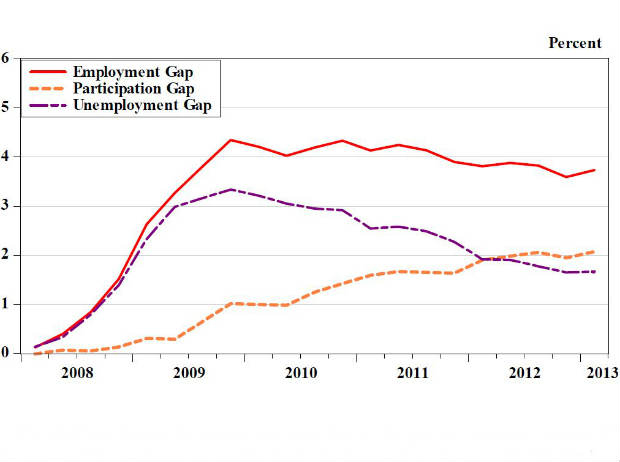 The bulk of the Erceg and Levin paper then addresses two critical questions:  Is this structural or cyclical? And will it persist as the economy recovers (and the unemployment rate drops)?  On the question of cyclicality, the paper looks at a cross-section of state participation rates during the recession (see below).  States with the deepest recessions had the sharpest fall in unemployment, which they argue suggests it’s weak demand that is driving much of the recent decline in participation.  State data has been criticized in the past as subject to noise and error, and others suggest that looking at flows into and out of the labor force is more consistent with a structural explanation.  In any event, this result is central to the debate over whether ’this time is different’ because the post-war experience has been that participation is largely non-cyclical. 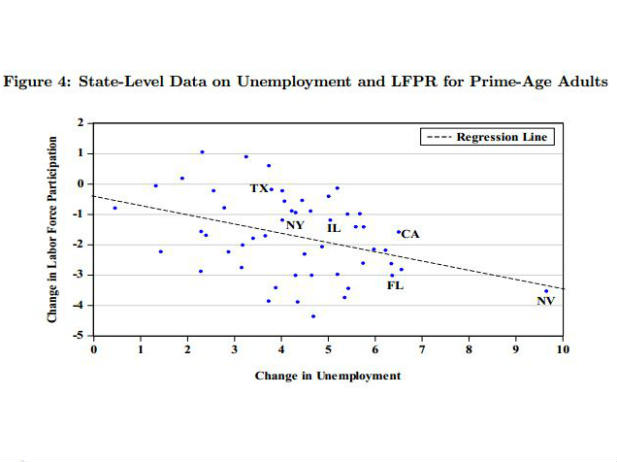 "The Board of Governors of the Federal Reserve System and the Federal Open Market Committee shall maintain long run growth of the monetary and credit aggregates commensurate with the economy’s long run potential to increase production, so as to promote effectively the goals of maximum employment, stable prices and moderate long-term interest rates." (Federal Reserve Act, 1977)

The Fed is unusual among central banks in having a statutory dual mandate to ensure both maximum employment and stable prices.  The Fed has long stressed that in most circumstances these two objectives are consistent, and further that it looks at a wide array of indicators in fulfilling its mandate.  However, much economic theory, and the Fed itself, have put the spotlight on the unemployment rate (and its relationship to the longer run, normal rate of unemployment) as the most important single metric of labor conditions.  This focus has intensified since the Fed, in December 2012, announced that an unemployment rate of 6.5 percent would serve as a threshold (not a trigger) for tightening policy from the current near-zero levels.

The dilemma for the FOMC is how to react if the unemployment rate declines to below 6.5 percent while the participation rate remains low.  Should we look at the sum of the unemployment and participation gaps as the measure Fed policy must address?  In assessing this argument, the Fed will have to answer three questions in particular:

None of these questions have easy answers. Erceg and Levin are careful to emphasize the limits of their analysis.  But their work, and the notion that the Fed needs to target policy to reduce this gap, may be front and center at future FOMC meetings.

U.S. Debt Ceiling: A Plan to Kick the Can?