At the start of this month, the United Nations replaced the Millennium Development Goals (MDGs) with the Sustainable Development Goals (SDGs), which will guide development actions worldwide for the next fifteen years. The seventeen SDGs are of unprecedented scope and ambition. In addition to traditional development priorities, which were targeted by the MDGs (e.g., poverty eradication, health, and education), the new development agenda includes a broader range of economic, social, and environmental objectives. The new goals could vastly expand access to healthcare and improve health outcomes, but may come at the expense of longstanding health targets, such as ending the HIV/AIDS pandemic. 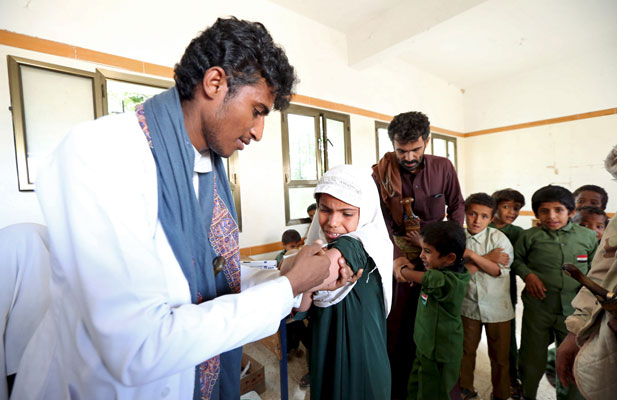 A girl looks on as a health officer injects her with measles vaccine at a school in Yemen’s central province of Marib, January 12, 2016. (Photo: Ali Owidha/Reuters)

Translating lofty development goals into significant advances in global health depends on effective global health governance, which a 2010 CFR report defines as “use of formal and informal institutions, rules, and processes by states, intergovernmental organizations, and nonstate actors to deal with challenges to health that require crossborder collective action.” But the SDGs themselves have profound implications for global health governance. Their impact is threefold:

Over the past fifteen years, the international development agenda prioritized funding and support for HIV/AIDS and maternal, newborn, and child health (MNCH). The SDGs target a broader range of health problems, spanning issues of MNCH, communicable diseases, noncommunicable diseases (NCDs), universal health coverage (UHC), substance abuse, road safety, reproductive health, the health-care workforce, and global health security. Goal three of the SDGs aims to "ensure healthy lives and promote well-being for all at all ages." Even without taking into account the other sixteen goals and their 160 targets (which can be viewed as social determinants of health), the nine targets under goal three shows a shift in global health priorities from narrow and discrete goals to more broad-based and inclusive ones.

The shift reflects the breadth and complexity of the global health challenges that the MDGs failed to effectively address. A major concern in implementing the MDGs was the significant disparity between global health funding and the global disease burden. In 2008, NCDs became the leading causes of death in the world, with roughly 80 percent of NCD-related deaths occurring in low- and middle-income countries. Yet according to an Institute of Health Metrics and Evaluation report, only 1.7 percent of development assistance for health (DAH) went to NCDs in 2014, compared to the 61 percent set aside for MDG priorities—HIV/AIDS (30.3 percent), MNCH (26.9 percent), and tuberculosis (3.8 percent).

The expansion of the global health agenda will likely give rise to a new set of players who address previously neglected challenges, such as noncommunicable diseases.

The widening and diversification of the global health agenda provide policymakers with little guidance on how to prioritize the SDGs’ competing targets. In September 2015, economists from forty-four countries called on policymakers to recognize a pathway to UHC as an essential pillar of development. WHO Director-General Margaret Chan echoed the sentiment, saying that “UHC is the key to achieving health-related SDGs.” However, as one article in the Lancet noted, “A narrow focus on UHC could emphasize expansion of access to health-care services over equitable improvement of health outcomes through action across all relevant sectors—especially public health interventions, needed to effectively address non-communicable diseases.”

The reframing and reprioritization of the global health agenda could transform global health funding. The U.S. government and the Bill and Melinda Gates Foundation, which together provided about half of the MDG spending, continue to prioritize MNCH and HIV/AIDS. However, a shift in focus toward the SDG agenda (and initiatives and projects such as UHC or NCDs) may hurt funding for MDG-based programs (e.g., the Global Fund to Fight AIDS, Tuberculosis, and Malaria). The funding gap could compromise efforts to end the HIV/AIDS pandemic by 2030. The estimated price tag to meet that goal is roughly $30 billion per year, much more than the existing funding level of $20 billion a year. This funding could decline as countries reallocate resources to meet the SDGs.

The SDGs are expected to change the number and nature of the players in global health governance. The expansion of the global health agenda will likely give rise to a new set of players to address previously neglected challenges, such as NCDs. Many existing players that have been devoted to achieving the MDGs will have to reassess their mandates and redefine their roles.

The emergence of these new actors will further diffuse authority in global health governance. The impact is likely to be immense for the WHO, the lead specialized agency for global health. While in the wake of the Ebola outbreak it is revitalizing its ability to address public health emergencies of international concern, there is no fundamental change in the WHO financing structure.  The gap between its mandates and its capabilities and resources will continue to widen; the latter cannot sufficiently address rising global health challenges. Over the past two decades, this gap has not only led the WHO to outsource of some of its main functions to organizations such as UNAIDS and the Global Fund, albeit reluctantly, but also nurtured the impression that it is ceding its leadership to other entities. Indeed, even though the WHO’s Chan considers UHC “the single most powerful concept that public health has to offer,” it is the World Bank that appears to be playing a leading, if quiet, role implementing UHC.

Pursuing health-related SDGs will reinforce the role of the state as the primary actor in global health governance. In the MDG era, states were the principal source of global health financing, but external funding played an important role. In some Asian and sub-Saharan African countries, development assistance reportedly constituted more than half of total government health spending. The implementation of the SDGs will likely change the donor-recipient relationship because the SDGs will rely less on donor charities than domestic funding. The need to mobilize domestic political leadership and improve domestic revenue collection capacities will reinforce state ownership of setting public health priorities and initiating and implementing health-related programmatic interventions.

Reaffirming state ownership does not necessarily mean a reversal of the dynamics of the “open-source anarchy,” in which decisions are made by both the state and nonstate actors. The state’s monopoly on global health governance is neither desirable nor feasible for at least two reasons: First, the existing governance structure is such that nonstate actors would resist attempts to significantly restrict their freedom of action. It is unrealistic to expect actors such as the Gates Foundation to change their mission or funding priorities any time soon. Second, given the resource constraints faced by all countries in achieving their health-related SDG targets and their reduced dependence on donor support, public-private partnerships in financing and delivering health services become all the more important.

Involving for-profit private actors (e.g., pharmaceutical companies) risks undermining public interests (e.g., equal access to medicine). But this should not deter policymakers from including the private sector in efforts to attain health-related SDG targets. Indeed, evidence suggests that when the public and private sectors work together, not only does UHC become more affordable, but overall health outcomes improve.

The SDGs will apply a different set of principles and approaches to addressing global health challenges than their MDG predecessor. Under the SDGs, tackling inequities becomes an end in and of itself. It came as no surprise that the SDG consultation and negotiation process paralleled the rise of the UHC movement, which urges countries to move toward providing all their citizens with access to affordable quality health care. Under this rights-based approach, access to health care for all is no longer an issue of charity but one of justice. Demands for equal and affordable access to innovative medicine, for example, will likely pit the developed and developing worlds against one another over patented NCD medications, increasing the tradeoffs among health, trade, and intellectual property in global health governance.

A main criticism of the MDGs is the persistence of inequalities in health outcomes and access and the failure to align global health funding with system-wide challenges.

This rights-based, equity-oriented approach to global health is quite different from how the MDGs had framed global health. A main criticism of the MDGs that they failed to address inequalities in health outcomes and access and align global health funding with system-wide challenges. Since 2000, public health has been increasingly framed as a national or international security concern, which fostered disease-specific, “vertical” public health interventions that failed to address systemic challenges. Providing visibility to some high-profile health problems at the expense of others exacerbates inequalities in global health. Furthermore, the disease-specific approach to global health largely stresses technological solutions over building the capacity of health systems (e.g., building health infrastructure or training health professionals).

Indeed, most SDG-associated health issues (e.g., NCDs or UHC) are not as amenable to securitization as are single infectious diseases (e.g., AIDS or Ebola), and addressing them often requires more integrated, multisectoral approaches. Easing the burden of NCDs, for example, calls for an approach that combines preventive interventions with continual, well-coordinated medical services for those with chronic conditions or at high risk of developing them.

The SDGs will likely be a game changer for global health governance. If fully implemented, they will likely significantly improve global health outcomes (e.g., average life expectancy) and access (e.g., UHC). The implementation of the SDGs may nevertheless create unintended outcomes, depending on the interaction among problems, players, and principles in the global health regime complex. In January 2017, the U.S. government—the the WHO’s biggest funder—will have a new chief executive. In May of that same year, the World Health Assembly will select a new WHO director-general. Amid profound changes to the global health landscape, leaders would be wise to embrace the changes enshrined in the SDGs and resist the temptation to continue business-as-usual, MDG-style policies and practices.

This publication was made possible with the generous support of the Rockefeller Foundation.