Skip to main content
Nigeria’s Future Hinges on Its States

Nigerians are looking to newly elected President Muhammadu Buhari to chart a new trajectory for Africa’s largest economy and most populous country. Yet a large cast of subnational politicians will play an equally important role in shaping the country’s future.

Nigeria is a federation of thirty-six states, each with populations, economic profiles, and budgets comparable to small countries. The country’s latest election cycle brought high focus to the presidency, but Nigeria’s overall stability, prosperity, and business environment is determined more by day-to-day dynamics at the state-level than it is by national-level decision making.

Decisions made by Nigeria’s state governors have over the years caused global oil prices to fluctuate, fueled the rise of Boko Haram, and arrested the spread of Ebola in Nigeria. Governors are the preeminent political figures in their respective states, but are also national power brokers and political party kingpins. They try to ameliorate, though at times they aggravate, insecurity in their states, even coopting federal security officials when necessary.

Under Buhari, the political influence of the country’s governors will grow in some respects and diminish in others: his hands-off approach to party politics gives his coalition’s twenty-two governors an opening to assert their influence.

Nigeria’s international partners and foreign investors often overestimate the on-the-ground influence of national elites. Whether international partners want to tackle insecurity, promote democracy, or facilitate a business deal, they must develop long-term strategies anchored by a better understanding of the Nigeria that exists beyond Lagos and Abuja and fueled by a deeper network of relationships there. 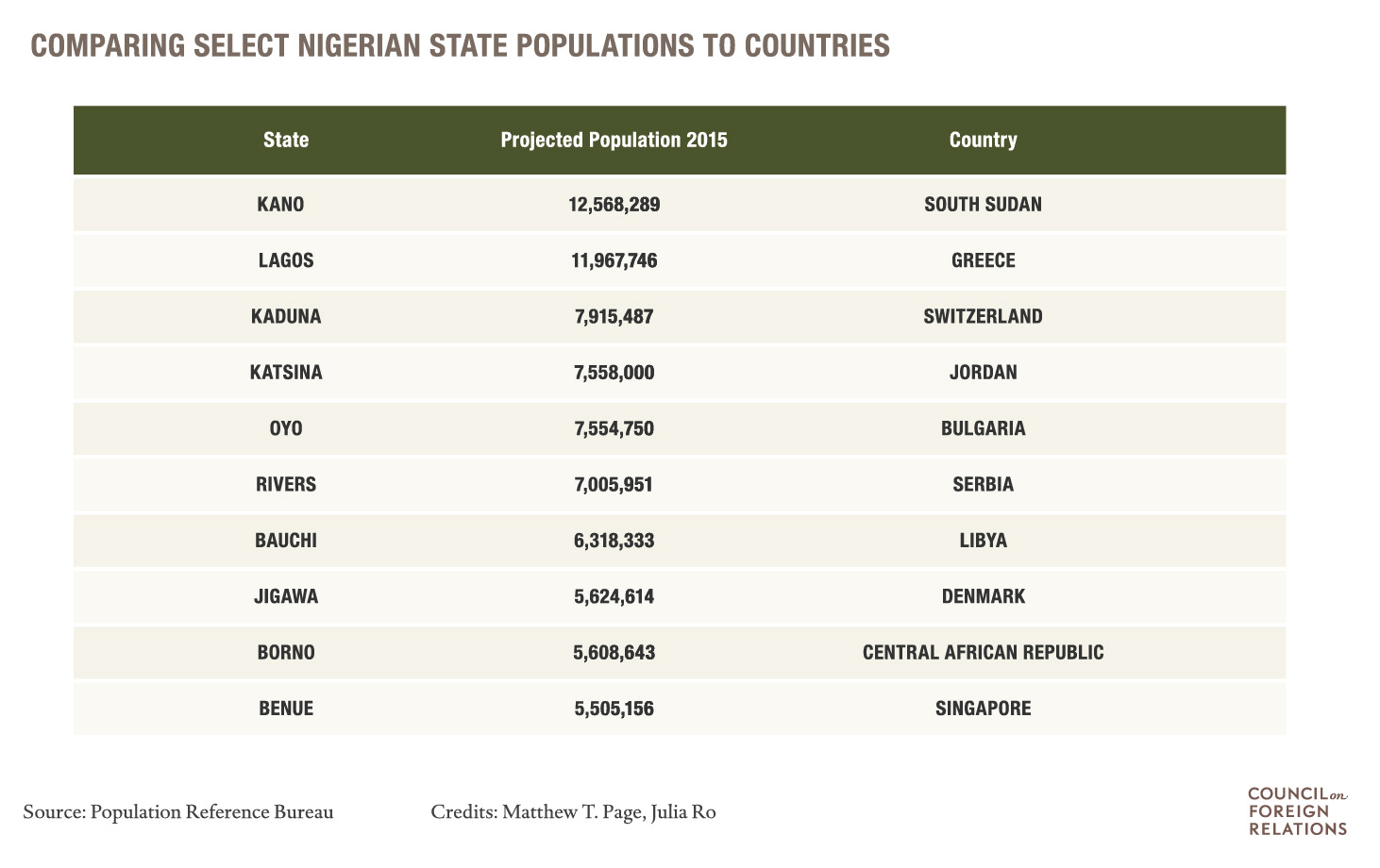 Economically speaking, Nigeria’s states are split between “haves” and “have-nots.”  Petroleum production accounts for 75 percent of Nigerian government revenue and is concentrated in the states of Akwa Ibom, Bayelsa, Delta, and River states in the Niger Delta region. A handful of southwestern states, anchored by Lagos, dominate the country’s non-oil economy. Outside these areas, state economies revolve around two stagnant sectors: subsistence agriculture and public-sector spending.

As President Buhari tries to put Nigeria’s public finances back in order, the balance sheets of all thirty-six states are sinking deeper into the red. States’ borrowing trends are risky and need to be addressed, according to a recent report (PDF) by the African Development Bank. Most states generate minimal revenue outside of their monthly allocation (royalty check) from the country’s diminishing oil income. Buhari has already bailed out twenty-seven cash-strapped states to the tune of $2.1 billion, roughly 10 percent of 2015 federal expenditures and almost as much as the country’s education budget.

Each of Nigeria’s thirty-six states have populations, economic profiles, and budgets comparable to small countries.

State governments nevertheless can play a central role in facilitating much-needed economic growth. The recent transformation of Lagos—one of the world’s fastest-growing megacities—from dystopia to regional economic hub is largely a result of good state governance. Adjacent Ogun state, home to several big industrial facilities, has benefited from Lagos’s economic development. (Note: Hard data is lacking on GDP of individual states because a Nigerian government effort to recalculate it in the wake of the country’s 2014 rebasing exercise has stalled).

But more often poor state governance is impeding the country’s growth.  In the World Bank’s ease of doing business index, Nigeria ranks 169th out of 189 countries, below economic basket case Zimbabwe and only one step above war-torn Yemen.

One illustrative example is the experience of U.S. agribusiness Dominion Farms’ attempt to establish an industrial-scale rice farm in Taraba, one of Nigeria’s poorest states. Lured to the state in 2011 by promises of government support and community cooperation, Dominion abandoned the project in early 2015 in the face of negative press coverage, parochial disputes, petty corruption, and bureaucratic backbiting. Lacking top cover or outside help, Dominion was unable to convince bureaucrats, state officials, civil society, and local communities to support its investment, which it expected to create as many as fifteen thousand jobs. The company’s exit dealt a significant blow to an agrarian state where youth unemployment and interethnic conflict are high. It is also a bad omen for the country’s underutilized agriculture sector. Nigeria has few large-scale commercial farms and, with modern techniques, its agricultural sector could produce more. 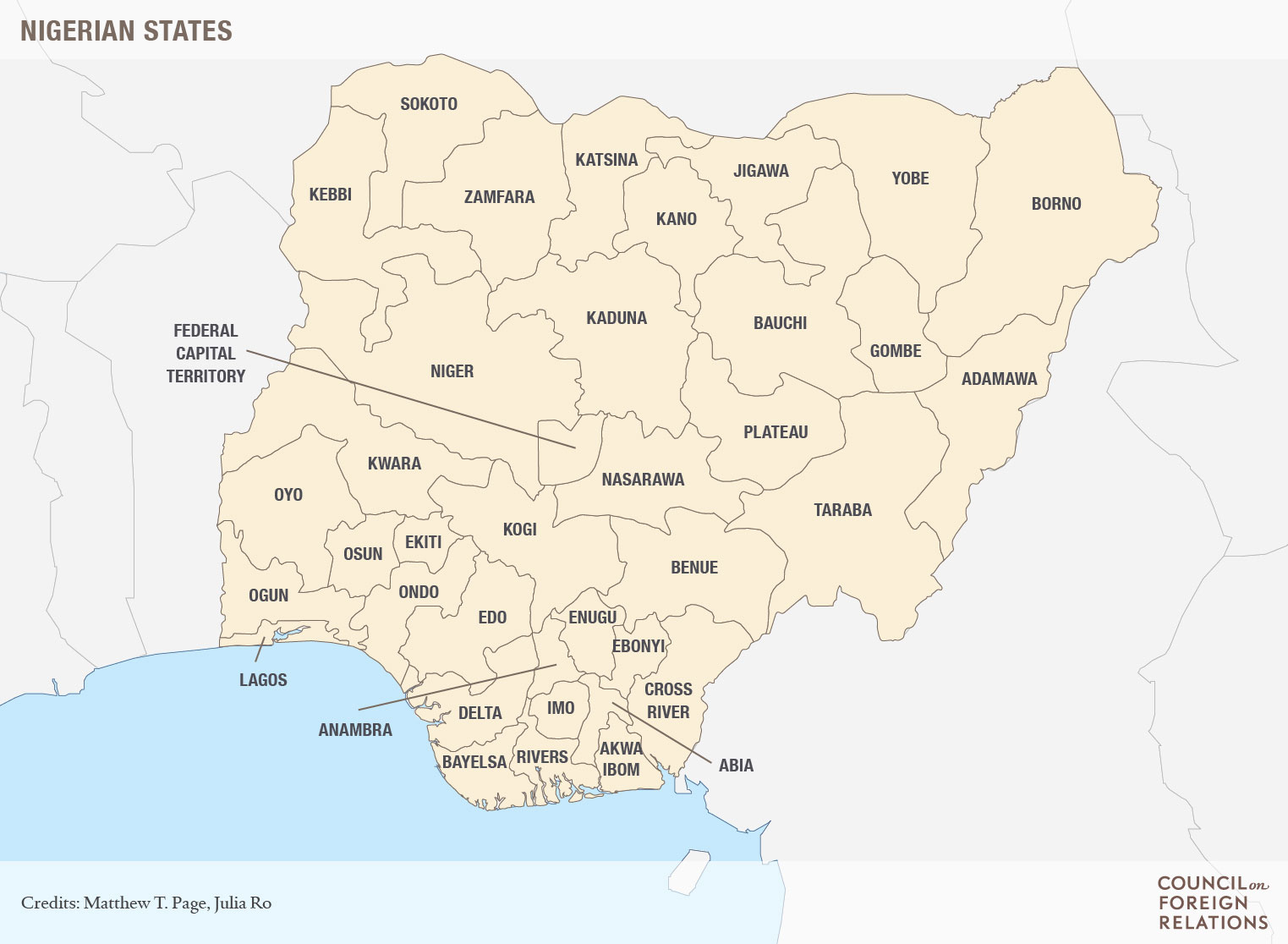 All Politics Is Local

State governors propel presidents, ministers, legislators, and top officials into power by controlling the country’s political grassroots. Governors can also play a spoiler role, undermining and toppling Abuja-based politicians who antagonize them. One of the main reasons President Goodluck Jonathan’s 2015 reelection bid failed was the defection of five governors from his party.

Governors are not all-powerful, however. They must deftly manage their relationships with the president and his coterie, as well as co-opt state legislators, civil servants, traditional leaders, local government chairmen, and security officials to hold on to power. Failure to do so can mean losing a bid for reelection or impeachment. One of the five governors who turned against Jonathan was impeached after disgruntled state legislators allegedly accepted bribes to unseat him. Similarly, four outgoing governors who mismanaged their political relationships failed to make the customary transition to the Senate during the recent election.

Unlike past presidents, Buhari does not appear interested in using federal appointments and government contracts to build political patronage networks aimed at weakening the influence of governors. On the contrary, governors are increasingly cash-strapped and beholden to Buhari to bail their states out. Buhari has also given a free hand to Nigeria’s anti-corruption agencies, which are reportedly investigating several former governors.

Unlike the federal government, states have no formal security powers and thus few tools with which to address insecurity. Nigeria’s myriad security challenges—the Boko Haram insurgency, Niger Delta militancy, communal conflict, banditry—challenge state governments as much as they do the central government. Many governors resort to donating fuel and vehicles to local police and military units that are otherwise neglected.

State officials sometimes, however, exacerbate local conflicts by sponsoring political thugs, showing ethnic bias, or neglecting simmering community disputes. This is most notable in the state of Plateau, the epicenter of communal conflict in Nigeria. During 2008 ethnoreligious clashes in the state capital Jos, then-governor Jonah Jang ordered security forces to “shoot on sight,” according to Human Rights Watch. Following his decree, soldiers and police allegedly carried out a wave of extrajudicial killings, bringing the two-day crisis’s death toll to over seven hundred.

Several states have armed local civilians to serve as vigilantes, with mixed results. Some observers credit these vigilantes with expelling Boko Haram from Maiduguri, the capital of Borno. Human rights watchdogs, meanwhile, claim these groups routinely commit extrajudicial killings and torture, pointing to gruesome web videos and interviews with vigilante leaders. In 2015, the United States for the first time listed Nigeria as a country that supports militias who use child soldiers, but later waived sanctions on national security grounds.

Decisions made by governors have over the years caused global oil prices to fluctuate, fueled the rise of Boko Haram, and arrested the spread of Ebola throughout Nigeria.

Governors may become even more important security actors if Buhari presses ahead with sweeping police reforms. In his manifesto issued prior to elections, Buhari mooted breaking up Nigeria’s predatory and ineffective federal police force, and empowered states to form their own police constabularies. Skeptics argue that governors could use state police forces as private armies, tools to rig elections and intimidate opponents.

Crafting lasting solutions to the country’s many challenges requires energizing state-level actors. To harness the states, federal officials, diplomats, businesspeople, and development professionals must leave their comfort zone to cultivate relationships outside Lagos and Abuja.

Beyond oil extraction, states’ economic potential is mostly unrealized. Most possess large consumer markets, untapped potential for commercial agriculture and livestock raising, as well as underemployed labor pools. The city of Onitsha in Abia embodies this potential: despite being 280 miles away from both Abuja and Lagos, it is home to one of the world’s largest marketplaces. Although up to three million people shop there daily, only a handful of Western companies are investing there.

States are also on the front lines of Nigeria’s many security crises. State-level actors are assuming new roles in combating insecurity and addressing post-conflict needs like reestablishing rule of law, rebuilding communities, and resettling displaced populations. In northeastern Nigeria, state officials in Adamawa, Borno, and Yobe have had to step up to compensate for anemic federal government security and reconstruction efforts.

To advance his political reform agenda, President Buhari must strike a balance between collegiality and coercion in his dealings with state governors. Buhari could, for example, offer governors financial incentives if they made much-needed reforms. In exchange for allowing full transparency of state spending and accounts, he could convert high-interest state debt into less-expensive sovereign debt. Conversely, Buhari could withhold financial bailouts from governors who shun needed reforms, thereby leaving them cash strapped and politically vulnerable as long as national oil revenues remain low. Regardless of his tactics, Buhari will need to work closely with the governors to succeed.