The selection of Haider al-Abadi to replace Nouri-al-Maliki as Iraq’s prime minister is a hopeful sign for a country riven by years of sectarian conflict, says veteran Iraq correspondent Ned Parker. He says that Abadi, a relatively moderate Shia, "has a strong grasp of what needs to be done to repair the rifts in the country," but doubts whether Iraqi politicians from all parties—Sunni, Shia, and Kurd—will be able to overcome the deep discord sowed by Saddam Hussein and aggravated by Maliki. 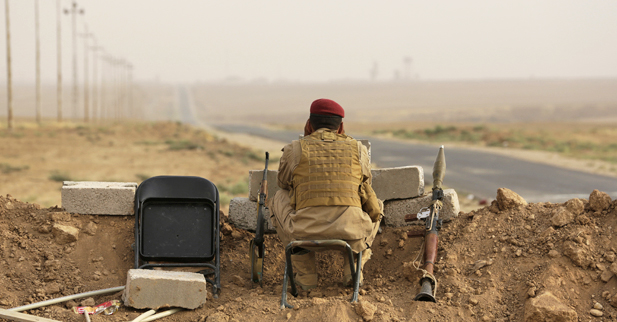 There have been some significant changes in Iraq in recent days. Haider al-Abadi has been named to replace Maliki. This has pleased the United States, which is now launching air strikes in the north to help the Kurds fighting the Islamic State in Iraq and Syria (also known as ISIS or the Islamic State.). Does this give you a sense of encouragement?

The picture remains unclear. The hopeful signs are the selection of Haider al-Abadi as the candidate for prime minister by the president of Iraq and [his endorsement] by the speaker of the parliament. Abadi is a moderate within Islamic circles. He has a strong grasp of what needs to be done to repair the rifts in the country that have resulted in about a third of Iraq falling out of the control of the central government.

And the military developments in the north with the Kurds are crucial. It’s not in anyone’s interest to see the Islamic State expand its reach. If the Kurdish region fell into danger, it would be a huge blow to the long-term stability of Iraq and the region.

How significant is the departure of Maliki?

After eight years, Maliki had exhausted any goodwill. He had to go. It doesn’t mean that the other players in Iraq’s political elite don’t bear responsibility as well for the dire straits Iraq is in. Clearly, all political players in Iraq bear some of the blame for why ISIS was able to take a third of the country.

The question now is whether Iraq is going to save itself. [Maliki’s departure] will really prove to be a referendum on the other political players—Kurdish, Shiite, and Sunni. Do they have the capacity to grow, to change, to take real risks to save Iraq, or will they solely be motivated by their own appetites for power, survival, and profits from the wealth of an oil state?

How significant is the recapture of the Mosul Dam?

Even though the dam appears to be in the hands of the Kurdish forces again, the big issue is the city of Mosul. The dam was of strategic interest because it could have flooded Mosul and and much of northern Iraq. And that was perhaps an unlikely scenario because if the Islamic State wants to make Mosul the seat of its caliphate, they certainly would not want to flood it. But it wasn’t in the interest of anyone to have the Islamic State holding onto to the Mosul Dam.

The key issue is Mosul itself and how it is recovered from the Islamic State, and likewise, other parts of northern Iraq: smaller cities, oil fields, and areas in Diyala Province and Anbar.

What is the major challenge in Iraq right now?

You have a mixture of the Islamic State and many armed Sunni groups, tribal figures, and former military officers who are deeply disillusioned, distrustful, and angry at the Shiite Islamists who have governed Iraq primarily since 2003. How do you convince them that the lesser evil is in fact Baghdad and not the Islamic State? That calculus hasn’t changed yet.

Does Abadi understand this problem?

Abadi and people around him understand the basics of what needs to be done quickly to win the Sunnis over. They grasp the resentment of the Sunnis that decided to fight al-Qaeda in 2006 and 2007 based on the assumption that they would find a way into the political mainstream of Iraq, and be rewarded with state and military jobs, and that the banning of former Baathists from government would end.

The Sunni parties were banking on all of these things, but that gamble failed. After al-Qaeda was defeated, many of those who led the fight in the Sunni Awakening movement were marginalized, chased from the country, or arrested.The promise of jobs in the security forces, as well as other state patronage, was never fully delivered upon.

And the way the 2010 election turned out—with Maliki remaining in office and not truly sharing power—made the Sunnis bitter. At times, Maliki looked to promote reconciliation, but mainly he and the other Shiite parties looked to arrest Sunnis they were suspicious of, including those who had fought al-Qaeda.

Even those Shiite parties that were critical of Maliki often looked to prosecute powerful Sunnis because they ultimately saw them as a threat, as having links to terrorism, or having links to the old Baath Party and the old military. The country hasn’t been able to mend wounds that Saddam inflicted on the psyche; and those problems only became worse after 2003 because of all the chaos and violence.

Now, both Sunnis and Shiites have to take a real step towards national partnership and unity and forgiving the past, if there is to be hope. There have to be some dramatic reform packages (that address grievances) being pushed through the new government very quickly if the Sunnis are going to be on side to fight al-Qaeda or the Islamic State.

The other challenge is the Sunnis themselves, who are their own worst enemy. They’re bitterly divided based upon tribal lines, secular versus Islamist, and also just sheer competition and ego among those who would like to be leaders of the Sunni community. All of that has often proven as lethal to the Sunni community as Maliki or any other Shiite political figure.

For instance, in the spring of 2013, when Sunni protests had risen up in Anbar Province and spread across Iraq, Maliki actually tried to pass an admirable reform package (to address Sunni grievances) with his deputy prime minister, Saleh al-Mutlag, a Sunni secularist. But rather than help, al-Mutlag and Maliki’s Sunni and Shia rivals sabotaged it in parliament. After that, the situation only became worse, with more violence between protesters and security forces. The Islamic State became powerful.

So all sides have to step up in a way that they have just not. They have to show real statesmanship.

What should the United States be doing that it’s not?

U.S. officials now are involved in a way that they weren’t involved in the past because the situation has gotten so bad. Perhaps one of the great tragedies of Iraq is that the current situation was avoidable. In 2010, Iraq had hopes of attaining some stability, and Iraqis were optimistic about the country. They wanted to overcome the sectarian divisions. And the Islamic State was much weaker.

But the policy of the Obama administration was very focused upon military engagement, and lacked a plan for diplomatic engagement to help build the democratic institutions that both Iraqis and the U.S. government had invested in over a decade.

U.S. officials need to be really engaged in pushing for an inclusive government and reinforcing the importance of civil liberties, free speech, and respect for human rights in Iraq. Without those things, the different populations will be antagonized, alienated, and there will be more room for violence.

The U.S. should be working on not only arming the security forces but helping the Iraqi government, including wiping out the high-level graft at every level. The corruption feeds the violence, prevents the government from being responsive, and promotes a class of civil servants who promote their own interests and deepen their pockets at the expense of building a robust economy.

The U.S. should also be promoting a strong judiciary that is free from official interference—whether it is the prime minister or others—and is also transparent where defendants have real rights.