Russian President Vladimir Putin’s actions in response to the Ukraine crisis, including the seizure of territory of a neighboring state, serves as a "game changer" in international relations with Russia, says Strobe Talbott, a former deputy Secretary of State and veteran Russia expert. He warned of the potential for further territorial expansion by Russia in neighboring states with ethnic Russian populations, like Kazakhstan, despite what he says has been appropriate condemnation by the international community. But he says Putin’s moves could come back to haunt Russia. "There are large parts of the Russian Federation that are populated not by Slavs, but by Turkic, culturally Islamic people, central Asian people," he said, "who will be alienated by the rise of Russian nationalism in their country and who are already under the influence of political Islam." 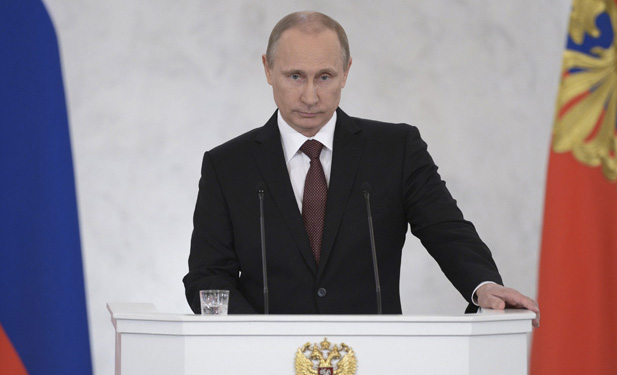 President Obama is going to meet next week with the G7 allies to plot strategy against Russian President Vladimir Putin for taking over the Crimea. Putin signed the Crimea Accession Treaty today. So far he doesn’t seem bothered by the various sanctions against him and his allies. Are we headed into a new Cold War?

We’re definitely in a new era. The Ukraine-Crimea crisis is not just one more blip on the radar, one more bump on the road. It’s a game changer. Unlike other things that Putin has done, notably the invasion of Georgia in 2008, this is the first time he, and therefore Russia, has crossed one of the most important red lines in the world—and I use the phrase "red line" advisedly. The red line is the border of the Russian Federation. [In Georgia, he sent Russian forces into the breakaway Georgian provinces of South Ossetia and Abkhazia to aid them]. What he has done here is to seize—albeit with a rather hokey referendum in Crimea—territory from a neighboring state and add it to the territory of the Russian Federation. And that goes by a number of names, such as territorial expansionism and irredentism, and it is unacceptable. And it is being treated as such by the international community, and should be and will continue to be for a long time because it’s very hard to imagine that he is going to be walked back. That’s point number one.

Point number two: this was, as best as we can tell, driven by one man—and that is Putin. In the extraordinary speech that he gave to the parliament the other day, he laid out a rationale for what he did that was utterly and entirely fictitious. What caused [Ukrainian President Viktor] Yanukovych’s downfall was the escalating brutality of his security forces against the protesters. He ratcheted up [the violence] to the point that Ukrainian television was all of a sudden broadcasting across the country footage of open caskets being carried along the streets and protesters being shot in the back. That’s what caused an eruption of people power, including, very importantly, Russian speakers across the country, including the eastern parts like Kharkhiv. So this was an internationally unacceptable act based on a lie.

Do you think Putin knows this is a lie?

It happens to be a lie that Putin believes, if I could put it that away. People who have briefed Putin have said, over the years, that when he has his advisers around and people put forward theories of what’s going on, he always goes for the most extreme conspiracy theory. Now, is this the Cold War again? No, it is not the Cold War. The differences are the following: the Cold War was global. It was a the geopolitical contest between two superpowers. This is a regional problem that Putin has created. Now it happens to be an extremely large region: At least the European parts of Eurasia, reaching well into the Asian parts of Eurasia as well. Second, the Cold War was ideological. This is not ideological. Putin is not going back to Marxist internationalism, he’s going back to something that is almost anathema to Marxists, which is nationalism. The only ideology he really offers is great Russian nationalism and irredentism, which by definition contains the zone of threat to those parts of Eurasia where there are large Russian-speaking minorities, a Russian majority. It is very hard to imagine this bringing the world to a shooting war, not to mention a global thermonuclear holocaust, which was what we were worried about—with good reason—during the Cold War. It is still a very, very serious problem. The last point I would make is that Putin, by doing this, is unwittingly sowing the seeds for the dismemberment of the Russian Federation itself, and that goes to his ideology.

Putin is basically taking the position that he is the servant of Mother Russia who will protect her children even if they’re on the other side of neighboring borders. Now that is a very dangerous proposition. It’s dangerous for Russia’s neighbors for obvious reasons. The three Baltic states are obviously nervous but they’re not shaking in their boots because they’re members of NATO and are protected by NATO. Moldova is not protected by NATO so those folks have a lot more reason to worry, and I would think [President Nursultan] Narzarbayev and Kazakhstan have a certain amount to worry about because there’s a large Russian population in the northern part of Kazakhstan.

"The Ukraine-Crimea crisis is not just one more blip on the radar, one more bump on the road. It’s a game changer."

The second danger, though, is that somebody who lives by the sword of irredentism can die by the sword of irredentism. Putin is creating a precedent that could come back to haunt him. There are large parts of the Russian Federation that are populated not by Slavs, but by Turkic, culturally Islamic people, central Asian people, who come from a different culture, who will be alienated by the rise of Russian nationalism in their country and who are already under the influence of political Islam. There’s even a mysterious but insidious organization operating in the badlands, called the Caucasus Caliphate, which is giving aid and arms and jihadists to secessionists in places like Chechnya, Ingushetia, and Dagestan. So what Putin has done here is to maybe blow the flames of secessionism in non-majority Russian parts of the federation.

President Obama’s response to this so far has been calibrated and appropriate and could well be effective. It includes not just talk but preparations for bolstering the security dimension of Western policy, American policy, and NATO policy. That doesn’t mean that we’re going to get into a shooting war with Russian troops in Ukraine, but it does mean that there are already steps underway to reassure those countries that are feeling very vulnerable today, meaning former Warsaw Pact countries, and certainly the Baltic states. And also doing everything possible to help Ukraine.

A critical issue going back to your opening question is the success that President Obama will have when he meets with allied leaders in Europe next week. Because there are detectable differences in emphasis and tonality between the position the Obama administration is taking and those of some European governments. The response of the Obama administration is right because it’s focused on Putin personally, his coterie of both powerful political figures and extremely rich people. And [the sanctions are] going after Bank Rossiya, which is the financial institution that sevices him and them.

We’ve needed Russia’s help on these Iranian nuclear talks, on Syria, and some other world issues. Do you think we’re going to lose Russia’s help?

I don’t know if we’ll lose it absolutely and totally. Russia has its own independent reasons for not wanting to see Syria as a chemical weapons power and not wanting to see Iran as a nuclear weapons power. I do think, though, that [Putin’s] default position is going to be confrontation and non-cooperation on pretty much anything that comes up. That doesn’t mean that those negotiations are scuttled but they’re definitely complicated. That goes to my last point, which is that President Obama has said from the beginning that we’re going to have to make sure Russia pays a real price for this. It’s not going to be cost-free for us either, and it’s not going to be cost-free for our private sector.

Is Russia Winning the Ukraine Scandal?

U.S. military and economic support for Ukraine has so far weathered the widening impeachment inquiry into President Trump’s contacts with Kyiv. This backing could strengthen Ukraine in the next round of diplomacy with Russia.

The planet is on fire, the pandemic smolders on, and the global recovery is faltering. The G20 was created for just such challenges, and the Rome summit offers it a chance to rise to the occasion.

The coup in Sudan shows that the military members of the transitional government were never truly committed to implementing democracy in the manner sought by protesters who forced Omar al-Bashir from power in 2019.

COP26 Climate Summit in Glasgow: What to Expect

Experts have warned that time is running out to avoid climate catastrophe. Will the global climate conference spark action?