Skip to main content
What Lies Ahead for Ukraine?

An uneasy peace exists in eastern Ukraine, where separatist forces control one of the country’s main industrial regions. The Minsk II protocol, signed by Ukraine and Russia in late 2015, called for the possibility of local elections for the rebel-held Donbass region. But no firm date has been set and skirmishes continue, while hundreds of thousands of residents have fled elsewhere in Ukraine or to Russia. It has become a frozen conflict, says Nikolas Gvosdev, Professor of National Security Studies at the U.S. Naval War College, and could remain one indefinitely unless the parties change their tack. Ukraine, in particular, faces tough choices. “You cannot pursue a strategy of reintegration and conflict resolution in Donbass while attempting to reform the national economy at the same time,” Gvosdev says. 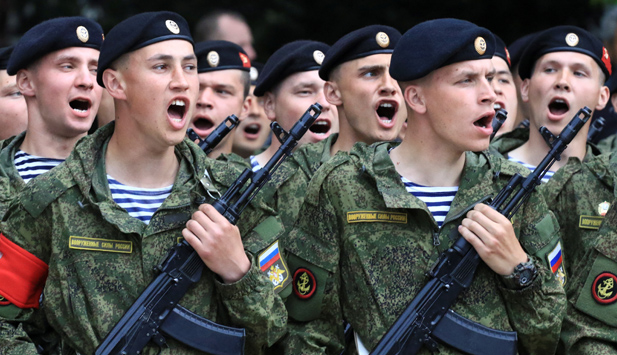 Russian troops rehearse for a military parade in Sevastopol, Crimea, on May 3, 2016. (Photo: Pavel Rebrov/Reuters)

Has the Minsk II process failed?

It has failed in some ways and succeeded in others. It failed in the sense that it did not bring about a political settlement, as the elections have not been held, and control of the border between Russia and Ukraine has yet to return to Ukraine.

"Minsk II represents the only game in town for Ukraine, for the separatists, for Russia, and even for the Europeans."

It succeeded in the sense that it created a process whereby everyone ostensibly agrees that there is no substitute agreement. No one is looking for a Minsk III or a Minsk IV. Minsk II represents the only game in town for Ukraine, for the separatists, for Russia, and even for the Europeans. It has also succeeded in the sense that we have not returned to open warfare. Everyone remains invested in seeing some degree of the Minsk process implemented, and no one wants to abandon it completely.

Are the planned elections going to happen in eastern Ukraine?

Linked to that, there is another critical issue: the Donbass has been depopulated. Many residents are now in Russia or in other parts of Ukraine. So the question becomes whether these people should be able to vote and how their votes would be tallied.

How has the conflict affected the rest of Ukraine?

First of all, according to some estimates, between 700,000 and a million out of the 4.5 million residents of the Donbass have been displaced: those who have left the Donbass, who have not remained under areas of separatist control, and who did not wish to go to Russia. You also have migrants, who were initially displaced people leaving to other parts of Ukraine.

The conflict has also demonstrated that the regular Ukrainian military has not been effective. This has led to the rise of militias. The Ukrainian government legalized some of these militia formations by giving them some degree of status, but it does raise questions about the future. You have armed groups now fighting at the frontlines of the Donbass that have only a tenuous connection to the Ukrainian government or are funded by political parties or by oligarchs.

"You have armed groups now fighting at the frontlines of the Donbass that have only a tenuous connection to the Ukrainian government or are funded by political parties or by oligarchs."

So now you have groups of people who are armed, trained, and equipped, who increasingly see the government in Kiev as dysfunctional and feel as though they have been denied the promise of the Maidan revolution. It introduces a new factor in Ukrainian politics on top of oligarchs and political parties. These groups who have fought and are still patrolling in the east feel that they now have a stake and should have a voice in Ukrainian politics.

Has the Donbass become another ungoverned zone in Russia’s periphery like the other frozen conflicts?

Certainly. When you look at the greater Black Sea area you now have a series of spaces that are not under the control of the titular government of the state that they belong to. Some examples are Abkhazia and South Ossetia in Georgia, Nagorno-Karabakh in Azerbaijan, Transnistria in Moldova, and now parts of the Donbass in Ukraine.

More importantly, for the Donbass, in the military sense, we are no longer dealing with ragtag groups of separatist militias. They had time to organize, to be trained, and to be equipped, which changes the balance. It is not a case where within a year or two the Ukrainian military might be in the position to restore control over those separatist areas with some sort of aid from the West. Either the separatists come back to the political table, or if the government strengthens it could initiate a military operation and subsequently change the facts on the ground.

These conflicts now have staying power and could be frozen indefinitely. Ukraine and other countries continue to deal with this issue of territorial integrity. For [Ukraine’s] Western partners, the question is to what extent you prioritize territorial integrity and to what extent you essentially say these territories are lost. If deemed lost, you concentrate then on promoting good governance and economic development, which remain under the control of the government in Kiev.

One of the questions that arose for Ukraine and its Western supporters is how much of Ukraine’s budget they should devote to make the country’s west work better, and how much they should devote to trying to retake the separatist territories in the east. Over the last two years, it became clear that you cannot pursue a strategy of reintegration and conflict resolution in Donbass while attempting to reform the national economy at the same time. The challenge for the Ukrainian government will be to prioritize one of those two issues.

To what extent is Russia overtly and covertly involved in the war?

Russia has engaged in covert training for the last year and a half. [Its] goal is to reduce the need for Russia’s direct involvement in the conflict and to have local forces be in a better position to hold their gains and not be defeated on the battlefield. This, of course, is what was happening in the fall of 2014. The separatist movement was very much in disarray.

The Ukrainian military, with all of its problems, was able to move forward, and there was a Russian intervention to stop that from happening. It was disguised from the Russian side. Russia claimed that these soldiers were volunteers, as they were without insignia. But clearly you had a regular Russian military intervention, which turned the status quo into a tie.

The Russians would like to prevent a future where they would need to intervene, so they have been working consistently, again, through proxies, cutouts, and other things that allow plausible deniability to build up a military force in the Donbass that can resist both the Ukrainian military and the Ukrainian militias.

What are the prospects for relations improving among Ukraine, Russia, and the European Union?

A lot depends on the choices that each side makes within the next twelve to fifteen months. There are choices that the Ukrainian government has to decide in terms of whether it can continue its current path and continue to retain the support of the population.

As the economic crisis in Ukraine continues, you will have growing pressure to modify Ukraine’s relationship with Russia simply because Russia remains Ukraine’s major economic partner. Russians have to decide at what point continuing to support the separatists in the Donbass interferes with the normal economic relations with the European Union. Oil prices remain depressed, as sanctions continue to be imposed on the Russian economy. The Russians will have to do a cost-benefit analysis.

The Europeans will have to decide what outcome in Ukraine they are willing to pay for, in terms of providing political or economic support. One can see a situation where, over the coming year and a half, all three sides begin to move forward and have some sort of compromise settlement.

"The Europeans will have to decide what outcome in Ukraine they are willing to pay for, in terms of providing political or economic support."

The Europeans could redefine what the EU Association Agreement means. Ukraine could redefine its internal governance, perhaps moving toward greater decentralization. Russia could redefine what some of its preferred outcomes in Ukraine are, and it may have to accept that it will have less influence in there as a price for restoring its economic ties to the European Union.

There will be two benchmarks in the near future. First, under the new Prime Minister Volodymyr Groysman, what sort of government is sworn in Ukraine and what is its ability to gain support. Second, the sanctions on Russia will have to be renewed or withdrawn in the summer.

Are there longer-term challenges you see arising?

Something that has really been overlooked is in this question is demographics. We are talking about the separatists in the region, but we are also really dealing with at least a million people who have migrated from the Donbass to Russia. They apply for permanent residency; they stay and work in Russia. There have been talks about to what extent there is a brain drain in Ukraine, both into western parts, into Europe, and into Russia. This could have long-term implications for Ukraine’s industrial strength.

African leaders must hold the United States to its vow, even as they put their own house in order.