In his annual preview of the year ahead, CFR Director of Studies James M. Lindsay sees another tumultuous year in global affairs. He points to surging fears of terrorism, chaos in the Middle East, tensions in Asia, and the slowing Chinese economy, against a backdrop of a potentially “raucous presidential campaign” in the United States. 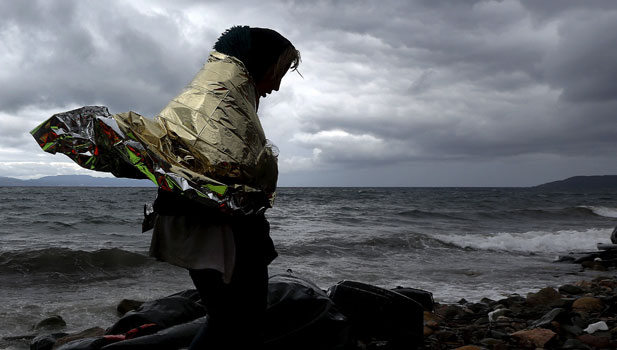 It looks to me like 2016 is shaping up as a very important year, with presidential elections in the United States and crises around the globe. Do you agree?

The coming year is shaping up to be another tumultuous one in global politics. We’re seeing surging fears of terrorism; we have a Middle East in chaos; a Europe that has lost its way; simmering maritime tensions in Asia; and a slowing Chinese economy that could stall the global economy. All of this will take place against the backdrop of a potentially raucous presidential campaign here in the United States.

Many of the problems that world leaders struggled with in 2015 will continue on in 2016.

What has stuck out this year, particularly in recent months, has been this unprecedented surge of refugees and migrants. How is the United States going to handle this?

It is a major challenge. The flood of refugees and migrants highlights two things. The first is the continuing horror of the Syrian civil war, which is sending refugees by the thousands into neighboring countries, putting great strains on those governments, and sending large waves of refugees into Europe. The second thing it highlights is that deep divisions exist among European countries over whether to accept refugees, how many to accept, and where they should settle. This has in turn exacerbated existing fault lines in the European Union.

What’s made it worse, of course, is the rise of the self-proclaimed Islamic State. There have been calls in this country and elsewhere for a united front against the militant group but so far, it seems to be more talk than action. What do you think?

Let’s focus on the challenge the Islamic State poses. The United States and several other countries have been running military operations largely organized around airstrikes in Iraq and Syria. The goal has been to contain and ultimately roll back the Islamic State. What we’ve seen with the bombing of the Russian passenger plane over Sinai in late October, the Paris attacks in November, and in the San Bernardino shootings in December, is the Islamic State striking beyond its geographical homeland and, in the case of the San Bernardino shootings, inspiring people to commit jihadist violence. These terrorist attacks have prompted Washington and other Western capitals to do more to try to smash the Islamic State. However, to this point, most countries have declined to send combat troops to Iraq and Syria. They instead are relying on air strikes and arming forces already on the ground, most notably the Kurds. But history suggests that airstrikes alone will not be sufficient to destroy the Islamic State.

"History suggests that airstrikes alone will not be sufficient to destroy the Islamic State."

The issue of ground troops in Syria and Iraq is going to be a major talking point during the presidential campaign, don’t you think?

In the wake of the Paris and San Bernardino attacks, the American public clearly wants more to be done to destroy the Islamic State. That has meant a greater willingness—at least for now—to consider using some U.S. ground forces. But it’s also clear from public opinion polls that the public is not enthusiastic about sending in large numbers of U.S. troops or having them stay in Iraq or Syria for an indefinite length of time. The public understandably wants to avoid repeating the mistakes that were made in Iraq.

President Obama has sent small numbers of U.S. special forces to fight the Islamic State, but has otherwise refused to commit large numbers of U.S. ground troops. He argues that the United States should rely on others to do the fighting on the ground, and that over time the combination of air strikes and local ground forces will destroy the Islamic State. The longer-term policy challenge is: What happens once you defeat the Islamic State? Who will stick around to make sure that its collapse brings about something better?

The conditions don’t appear to exist for substantially improved relations between Russia and the West. That is not to say, however, that some cooperation isn’t possible. While the West and Russia have different interests, they do not always have opposite interests. That’s most obvious in the case of Syria. The Russians have reason to want to see the Islamic State defeated, just as the United States and Europe do. One consequence of that overlapping interest is the recent diplomatic effort to negotiate a settlement to end the Syrian civil war, or at least to diminish the level of carnage. If the Syrian conflict can be ended or limited, it would hopefully create space where the fight can be taken to the Islamic State.

"While the West and Russia have different interests, they do not always have opposite interests."

But looking elsewhere, Russian policy in Ukraine remains unhelpful. Moscow also continues to try to exploit divisions within Europe over issues such as austerity, immigration, and the power of Brussels. So, for now, no rapprochement between Moscow and Europe or between Moscow and the United States seems to be in the offing.

When we spoke last year, negotiations between the so-called P5+1 nations and Iran over limiting Iran’s nuclear potential had not been concluded. Those talks have since resulted in a deal. How do you read the deal, particularly in Iran?

The deal has gone into effect. The question now is: Will Iran abide by the terms? Iran has an incentive to do so.  As critics point out, if Tehran abides by the terms of the deal, the most significant constraints on its nuclear activities will be gone in no more than fifteen years. Iran will then be free to proceed as it wishes. Nonetheless, the potential exists for Iranian hardliners who oppose the deal to find a way to scuttle compliance.

The immediate challenge for Western policymakers, particularly in Washington, is to make sure that Iran abides by its commitments. But Western policymakers need to confront two other challenges: determining how to deal with Tehran on the many contentious issues that aren’t covered by the nuclear agreement and fashioning a strategy that minimizes the chances that Tehran will seek a nuclear weapons capability when the nuclear deal does expire.

How would you describe relations with China? Are they as rocky as they were last year?

Over the past year, China and the United States have kept their disagreements more or less in check, at least publicly, and they have worked to cooperate. This cooperation was most notable on climate change, where the two sides found the common ground that made the recently concluded negotiations in Paris a success. On the flip side, an obvious area of tension continues to be China’s maritime claims in the South China Sea. The Chinese have built several artificial islands, claiming a twelve-mile zone around them as China’s territorial waters. This fall, the United States sent a destroyer through one of those twelve-mile zones to make the point that these remain international waters. Beijing called the move an unnecessary provocation, but so far those words have not been matched by deeds. That could change in 2016.

One of the obvious sore points in President Obama’s foreign policy has been his relations with Israel’s Prime Minister Benjamin Netanyahu, which were clearly strained by the Iran deal. How would you characterize this relationship for the remaining year of Obama’s term?

By all accounts, the two men don’t have good personal chemistry. That’s not likely to change during Obama’s final year in office. There’s also no reason to expect a major breakthrough on the Israeli-Palestinian issue. The recent rise of violence in Jerusalem and the West Bank is troubling. We don’t know if that violence will ebb or if it will increase. But whatever the events on the ground, the bilateral relationship will likely remain strong despite any personal animosity between the two leaders.