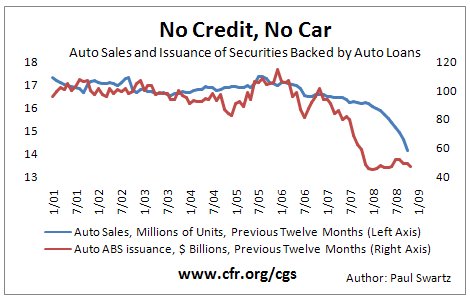 The drying up of credit markets, first in securitization, then in bank lending, has spilled over into the real economy. As the graph indicates, the absence of credit to finance car purchases has led to a decline in car sales, pushing U.S. automakers to the brink of bankruptcy. Given Wall Street’s rescue, some suggest that it is only fair to bail out the auto industry. However, critics claim that this use of taxpayer funds would only delay adjustment.

Sachs: A Bridge for the Carmakers

Editorial: Saving Detroit From Itself

Feldstein: A Chapter For Detroit To Open