After Keith Bradsher’s New York Times article, though, all eyes are on China.

In February, China bought Treasuries. $4.64b by my count. It bought $5.61b of bills, while reducing its long-term Treasury holdings by $0.96 billion.

But China also reduced its US bank deposits by $17.24 billion.

Is this the beginning of the end? Has China decided to stop buying US assets?

China’s trade surplus was particularly low in February (largely for seasonal reasons), so less money was coming in. And if January’s purchases are added to February’s sales, China’s US holdings are still up -- though only by $7-$8 billion.

More importantly, one month does not a trend make.

But until February, China’s recorded dollar purchases, best I could tell, exceeded the growth in China’s reserves. China’s flows into "safe" US assets certainly exceeded its reserve growth. 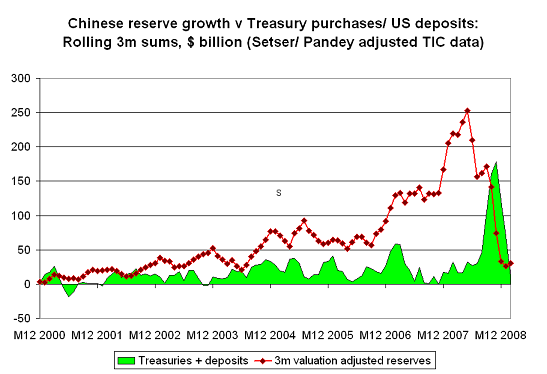 Over the last three months, for the first time in a long time, the Setser/ Pandey data set -- which includes an estimate of Chinese purchases through London -- didn’t show any rise in China’s foreign assets.*** 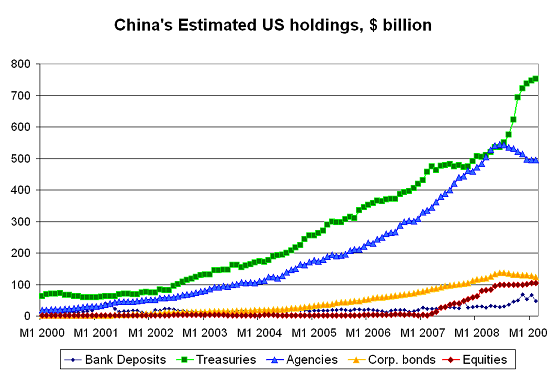 China’s estimated US portfolio has been hovering between $1520 and $1540 billion since November.

* The big swing in total TIC flows comes from the line item showing the net change in banks own dollar-denominated liabilities. I don’t have a full explanation for the large outflows in January and February (a combined $250b or so). They seem to be the counterpart though to the $635b in inflows from this line item last fall (from September to December). If I had to guess, I would bet both the inflow in the fall and the current outflow are linked to the Fed’s swap lines with foreign central banks -- and the associated rise in European central banks dollar loans to European commercial banks. The rise in the fall corresponds with the expansion of the Fed’s swap lines in the fall, as the world’s central banks cooperated to provide a "global" dollar lender of last resort. And the recent outflow seems to correspond with the repayment of the Fed’s swap lines. Just a guess though. Confirmation would be appreciated.

** Some of the inflow into US assets could have come as China shed offshore dollar assets, or as China pulled dollars from private intermediaries.

*** China’s equity holdings have not been marked to market; the chart consequently overstates the current market value of China’s US equity holdings. I haven’t adjusted China’s equity portfolio because I suspect SAFE holds its equities on its books at their purchase price -- i.e. it also doesn’t mark to market. Plus the spreadsheet was designed for bonds and I haven’t added a mark to market function!

Did Iran Suffer a Nuclear Setback?