Why the suspicion? Simple. Tourism imports soared in 2014, at a time when all other Chinese imports were either falling or experiencing a slowdown in the pace of growth. 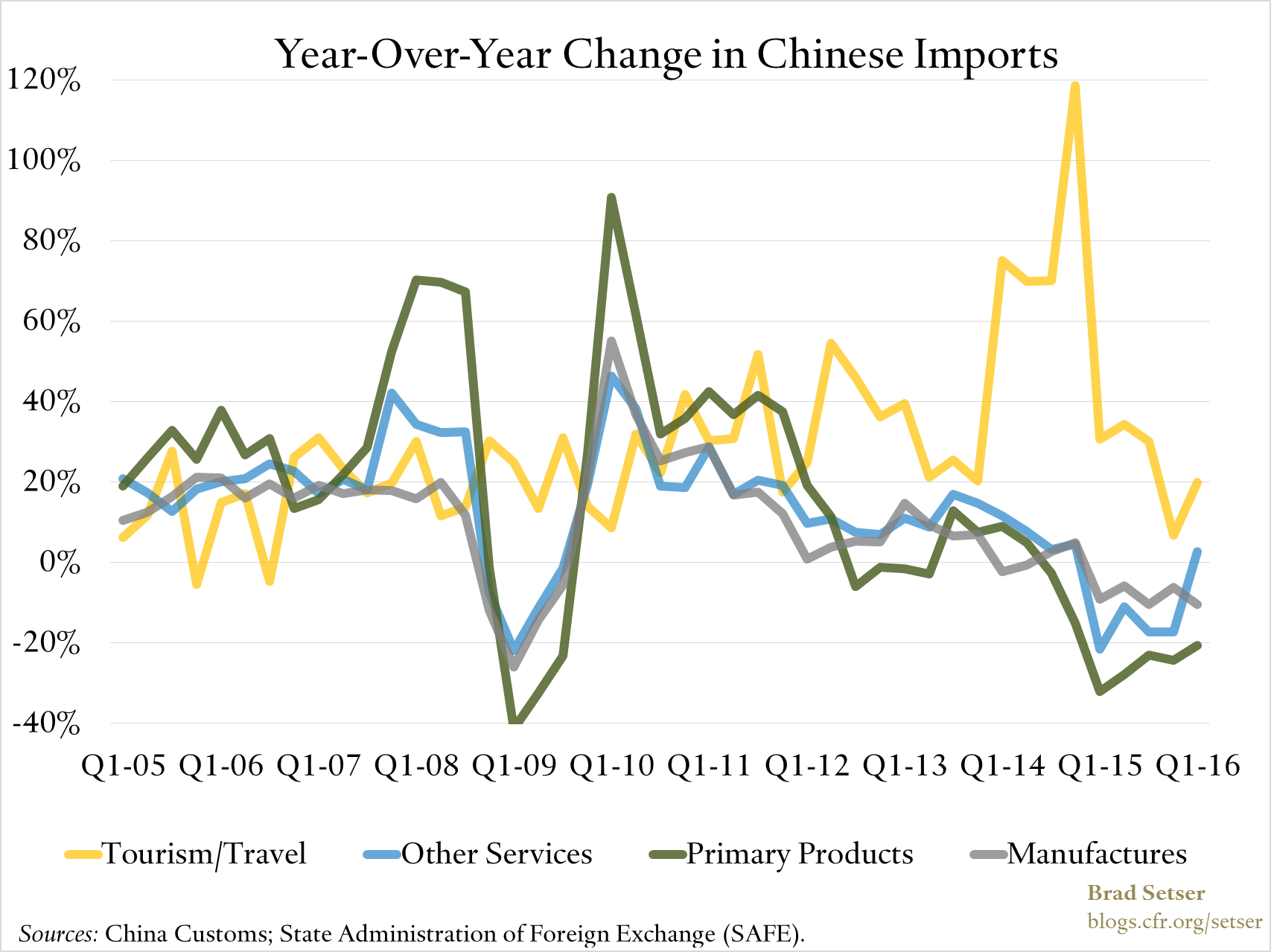 There is a big falloff in Chinese tourism to Hong Kong and Macau, falling retail sales in these traditional destinations for Chinese tourists, and soft Asian sales of “luxury" goods.

But there is also no doubt destinations like Thailand and Japan (remember the yen move) saw a big increase in arrivals from China.

Sum it all up though, and the number of tourists travelling abroad in 2014 looks to have increased by about 10 percent (from 100 to 110 million or so) in line with past growth. Look at this Goldman Report.* With an increase in nominal spending per tourist it is possible to imagine tourism growth of say 20 percent. Not 80 percent. 2015 seems similar. Visits to Hong Kong and Macau fell.

So what is going on in the balance of payments (BoP) data? No doubt many things. China seems to have revised its methodology for “counting” tourism in the balance of payments in some way, leading to a jump in both imports and exports in 2014. Tourism imports rose by a giant $100 billion in 2014 (with a slowing economy) after growing by $40 billion in 2013. Tourism exports were adjusted up too, but not by nearly as much.

The result is a data series that doesn’t quite map to other indicators of tourism, as well as an important break in the data. And of course it is also the case that expectations about the course of China’s currency against the dollar started to change in 2014, strengthening incentives for disguised outflows. 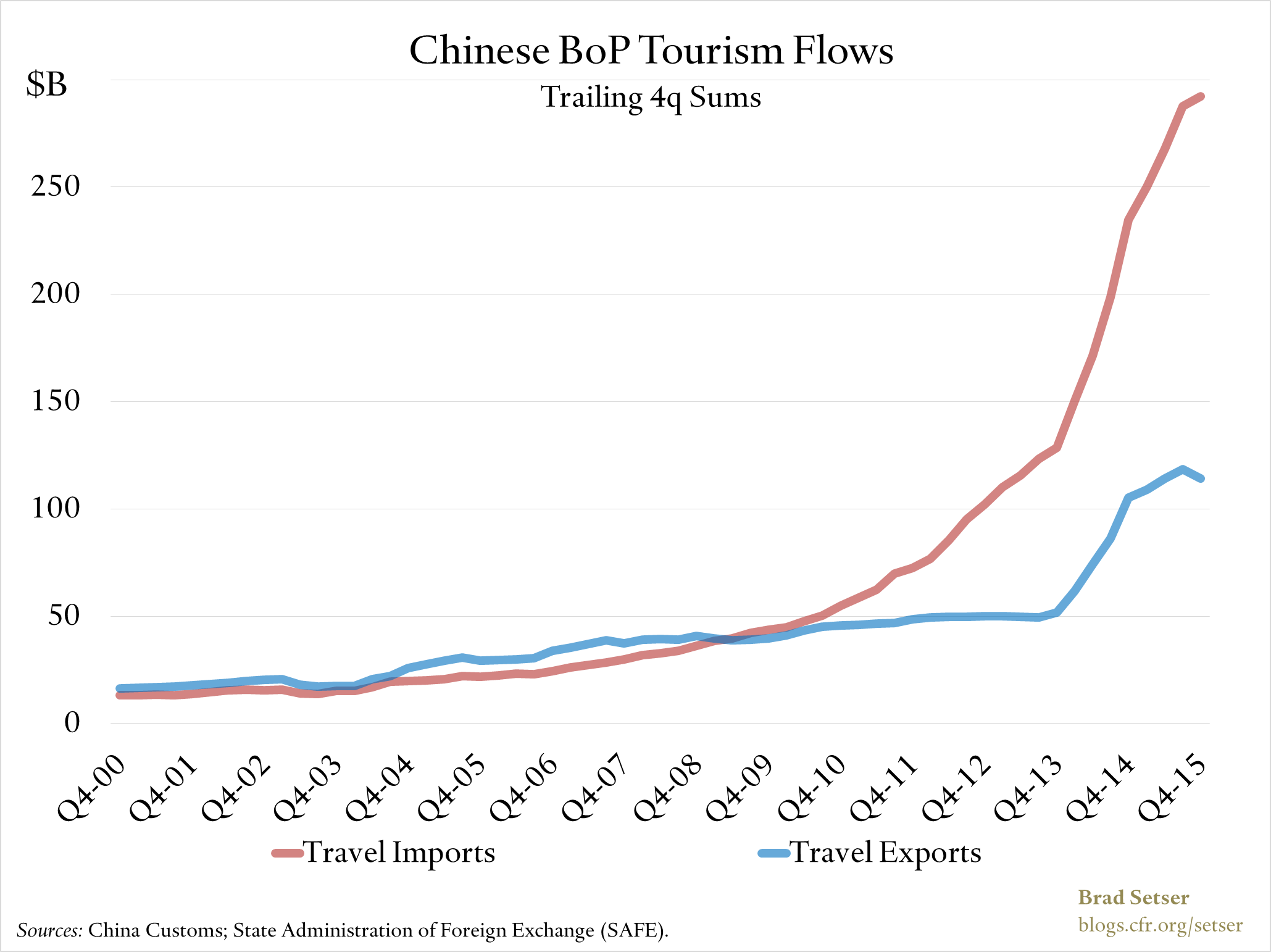 As a side note, the revisions have come in waves; the first report—judging from memory as I didn’t save my spreadsheets—for 2014 didn’t show a similar surge in tourism imports.*

So what could account for the huge tourism deficit, one that isn’t reflected in a parallel rise in the data on the number of tourists?

(1) Hidden imports. Chinese tourists travelling abroad buy luxury and other goods to bring them back to China, and in the process avoid China’s hefty sales tax, its not-trivial import tax on many goods, and its often heavy luxury tax. The FT’s reporting, though, suggests the opposite:

"for the first time since it began its research in 2013, FT Confidential Research found Chinese tourists spent more on accommodation, food and entertainment combined abroad than on shopping. Year on year, shopping fell on average 6.9 per cent, and 10 per cent among wealthier travellers."

Flows that seem to have continued even after SAFE cracked down earlier this year: "Safe said in February that it would enforce a $5,000 cap on the purchase of financial products through credit cards issued by China UnionPay, the country’s state-controlled card monopoly. UnionPay has said those checks were already in place. People involved in Hong Kong’s insurance market say the cap has not prevented Chinese customers from swiping their UnionPay cards multiple times in order to surpass the $5,000 cap."

The tourism deficit is now close to $200 billion (roughly a third of the size of China’s goods surplus), so the accounting matters.

Hidden goods imports imply China is sharing a bit more demand with the rest of the world.

Hidden capital outflows, on the other hand, imply that China is helping to export secular stagnation globally in the Eggertsson-Summers formulation.

* Some other sources have a 2014 increase in the number of tourists travelling abroad of up to 20 percent, but nothing that gets you close to the growth in tourism spending in the BoP data.

** For a while China was reporting negative exports of other business services, which was rather strange.