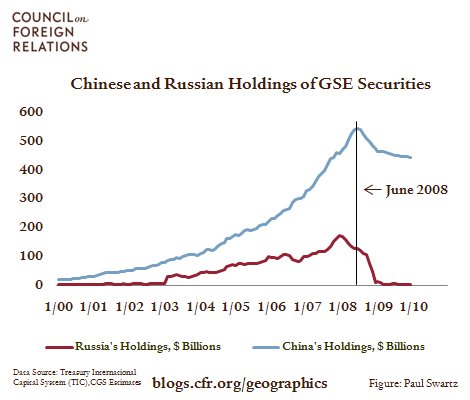 In his recently published memoir, former Treasury Secretary Henry Paulson claims that Russian officials approached the Chinese in the summer of 2008 suggesting that both countries sell large amounts of debt issued by U.S. Government-Sponsored Enterprises (GSEs), such as Fannie Mae and Freddie Mac, in order to pressure the United States into explicitly backing these companies. Paulson, who found the report “deeply troubling,” claims that China opted not to collaborate with Russia. Nonetheless, both countries dumped GSE debt that summer, as illustrated in the figure above. Russia sold $170 billion during 2008, while China sold nearly $50 billion between June 2008, when its holdings peaked, and the end of 2008. During this fire sale the yield spread between GSE debt and U.S. Treasury debt soared, as illustrated in the figure below. As GSE debt was widely used as collateral in the U.S. repo market, U.S. financial institutions were obliged to quickly pony up more securities to support their borrowing. This exacerbated the growing credit crunch. The U.S. government was forced to put the GSEs into conservatorship in September 2008. Secretary Paulson was more right than he realized to be concerned. The episode highlighted the clear risks to the United States, and indeed the wider world, of growing American dependence on foreign government lending. 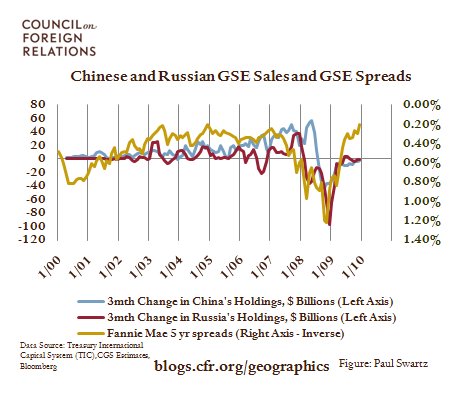