Are Americans becoming more isolationist in their foreign policy views? Or are they continuing to embrace internationalism? A new poll out by the Chicago Council on Global Affairs suggests that the answer is a little of both. (Full disclosure: I served on the advisory board for the poll.)

At first blush the Chicago Council’s poll numbers reaffirm the current conventional wisdom that Americans are more skeptical toward foreign engagements. While a majority of Americans (58 percent) say the United States should take an “active part” in world affairs, the percentage who favor “staying out” (41 percent) is the highest since pollsters first began asking the question back in 1947. (The Chicago Council has been conducting its periodic foreign policy surveys since 1974.) As a result the gap between Americans favoring “active part” over “staying out” has shrunk to its smallest ever, just 17 percentage points. 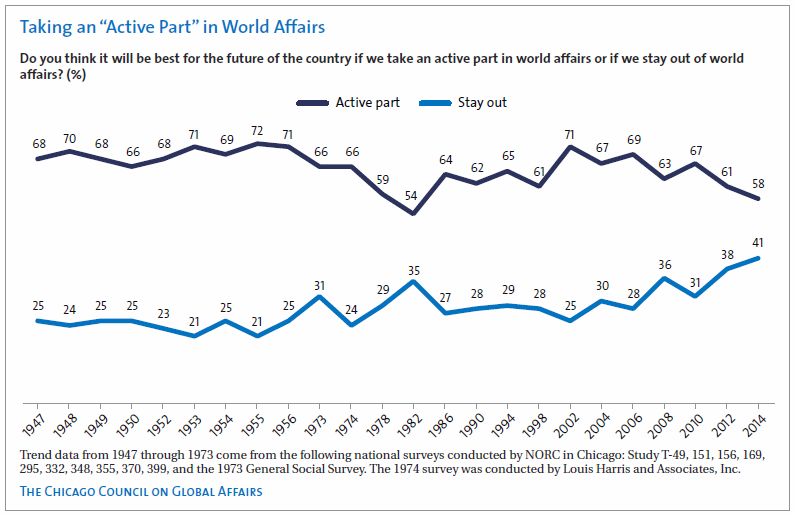 But the public’s response to other questions in the poll suggest that an increased wariness about foreign policy is not the same as a sharp turn inward. More than eight in ten Americans say that strong U.S. leadership in world affairs is desirable, in line with previous responses to the question. Just as important, even those who want the United States to “stay out” of world affairs think that strong US leadership is either “very desirable” (19 percent) or “somewhat desirable” (50 percent). 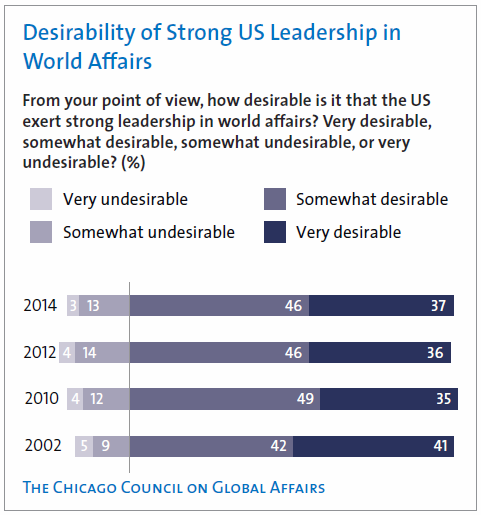 Likewise, only 19 percent of Americans favor decreasing the U.S. commitment to NATO or withdrawing entirely. (The poll was conducted in May 2014.) Fifty-nine percent favor maintaining about as many U.S. military bases overseas as it has now, the highest response for a question that has been asked since 2002. The percentage of Americans thinking that globalization is mostly good for the United States is at an all-time high (65 percent), while the percentage thinking that it is mostly bad for the United States (34 percent) has fallen since it peaked in 2010 at 41 percent. Support for agreements to lower trade barriers is at a high (64 percent). 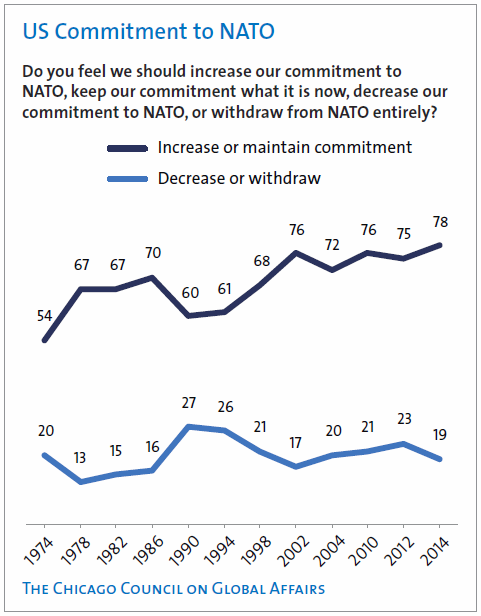 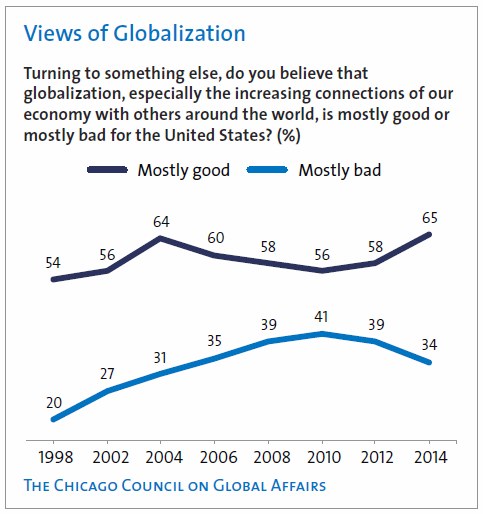 The fact that public opinion on foreign policy isn’t consistent, and at times is contradictory, is hardly surprising. That finding is a staple of public opinion research. It is also not a new phenomenon in foreign policy. President Woodrow Wilson noted it a century ago in the wake of the sinking of the the Lusitania when he wrote: “I wish with all my heart I saw a way to carry out the double wish of our people, to maintain a firm front in respect of what we demand of Germany and yet do nothing that might by any possibility involve us in the war.”

The upshot of the Chicago poll is that the double wish remains alive and well. The wars in Iraq and Afghanistan have left Americans more skeptical about what U.S. action abroad can accomplish. They would prefer to focus on problems at home rather than problems abroad. But at the same time, they are not demanding that Washington turn its back on the rest of the world. They recognize that what happens abroad affects them and that inaction has its own costs. They will support overseas engagement where they are persuaded that American interests are at stake and U.S. action can make a difference. The danger going forward is that Washington policymakers, convinced that the public has turned blindly inward, will be reluctant to make that case.