I got my start, so to speak, tracking global reserve growth and then trying to map global reserve flows to the TIC data. So I have long thought that large scale central bank purchases of U.S. Treasuries and Agencies, and German bunds, and JGBs didn’t start with large scale asset purchase programs (the academic name for “QE”) by the Fed, the ECB and the BoJ.

Before the crisis, back in the days when China’s true intervention (counting the growth in its shadow reserves) topped $500 billion a year, many in the market (and Ben Bernanke, judging from this paper) believed that Chinese purchases were holding down U.S. yields, even if not all academics agreed. The argument was that Chinese purchases of Treasuries and Agencies reduced the supply of these assets in private hands, and in the process reduced the term/risk premia on these bonds. Bernanke, Bertaut, Pounder DeMarco, and Kamin wrote:

"...observers have come to attribute at least part of the weakness of long-term bond yields to heavy purchases of securities by emerging market economies running current account surpluses, particularly emerging Asia and the oil exporters .... acquisitions of U.S. Treasuries and Agencies took these assets off the market, creating a notional scarcity that boosted their price and reduced their yield. Because [such] investments were for purposes of reserve accumulation and guided by considerations of safety and liquidity, those countries continued to concentrate their holdings in Treasuries and Agencies even as the yields on those securities declined. However, other investors were now induced to demand more of assets considered substitutable with Treasuries and Agencies, putting downward pressure on interest rates on these private assets as well."

I always thought the mechanics for how the Fed’s QE impacts the U.S. economy—setting aside the signaling aspect*—should be fairly similar. Both reserve purchases and QE salt “safe assets" away on central banks’ balance sheets.** 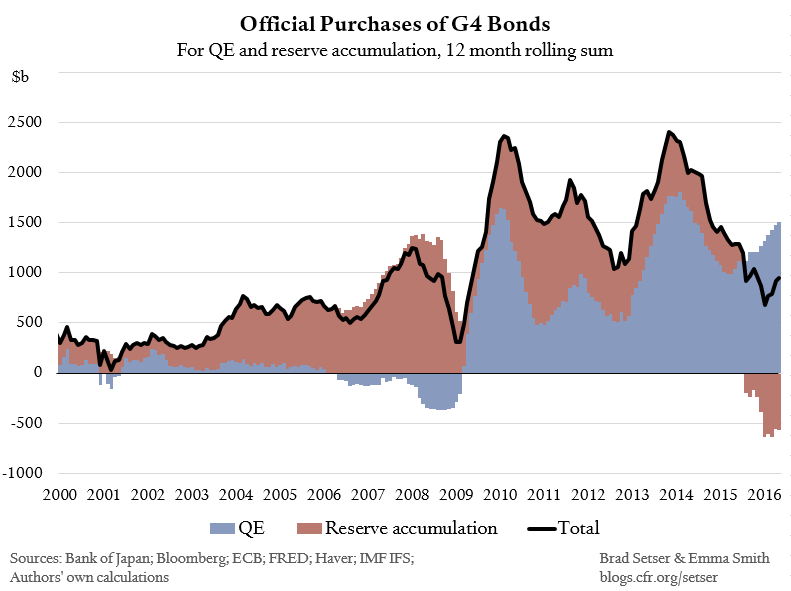 There are now a number of charts illustrating how the ECB and BoJ have kept central bank bond purchases high globally even after the Fed finished tapering. Emma Smith of the Council’s Geoeconomics Center and I thought it would be interesting to add reserve purchases to these charts and to look at total purchases of U.S., European, Japanese and British assets by the world’s central banks over the last fifteen years—adding the emerging market (and Japanese and Swiss) purchases of G-4 bonds for their reserves to the bonds that the Fed, the ECB, the Bank of Japan and the Bank of England bought.

Obviously there are important differences between balance sheet expansion done through the purchase of foreign assets (reserve buildup) and balance sheet expansion done though the purchase of domestic assets (quantitative easing).  One is aimed at the exchange rate, the other at the domestic economy. But if portfolio balance theories are right, the direct impact on bond prices from foreign central bank purchases of bonds and from domestic central bank purchases of bonds should I think be at least somewhat similar.

As the chart above makes clear, large-scale central bank asset purchases in some sense preceded the global crisis.  Pre-crisis, the purchases came from emerging market central banks. China, counting its shadow intervention, bought about 15% of its GDP in reserve assets from mid 2007 to mid 2008; as a share of GDP, that is a pace of asset purchases equal to the BoJ’s current pace.

More recently, reserve managers have quite obviously been selling. The reserves the PBOC bought from 2012 to 2014 were sold in 2015 and 2016. Yet with three trillion plus in reserves, and more in its shadow reserves, the PBOC hasn’t yet sold anything it bought prior to the global crisis. And more importantly, recent reserve sales have come at a time when the BoJ and ECB have been ramping up their purchases. Aggregate central bank demand for safe assets has remained elevated.

There has been a significant shift in the currency composition of large scale central bank assets purchases in the past couple of years. In fact, adding reserve purchases to QE purchases magnifies the recent global shift in central bank demand away from dollars. EM reserves managers have been selling dollar assets. At the same time the Fed isn’t buying assets anymore. And the G-7 currency agreement has limited the ECB and (especially) the BoJ to the purchase of their own assets, so there has been a surge in central bank purchases of euro and yen denominated bonds. 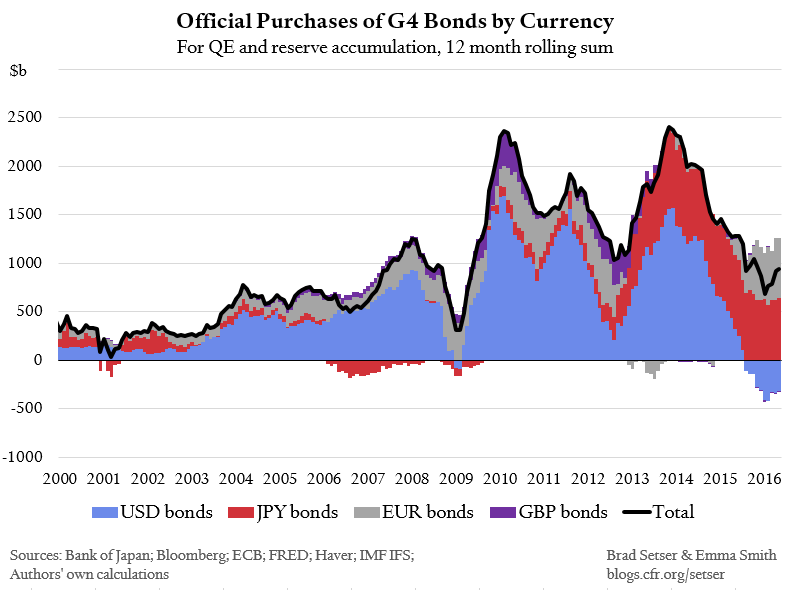 Prior to the crisis, I was never completely convinced by arguments that the currency composition of the reserves held by central banks didn’t matter. Partially that was self-interest of course; I had spent a lot of time developing my reserve tracking technology. But I also didn’t think private investors were completely indifferent to the currency composition of their portfolio of safe assets. If the central banks accumulating reserves wanted euros rather than dollars, the euro would need to rise relative to the dollar to make "safe" dollar assets cheaper and thus more appealing to private investors. Treasuries and German bunds were not perfect substitutes. Nor for that matter are Agencies and French government bonds.

I still think that is the case. It matters that the ECB conducts its asset purchases by buying euro assets, not by buying Treasuries.

At the same time, with ECB purchases exceeding euro area government net issuance and with BoJ purchases far exceeding net new issuance of JGBs, it is hard to argue that some investors in European and Japanese debt haven’t been pushed into U.S. Treasuries and Agencies. (This Banque de France working paper found that foreign holders of euro-denominated bonds were the most likely to sell to the ECB.) And thus there should be some impact on the U.S. yield curve from the actions of other central banks even when those central banks aren’t buying dollars.

All this said, the indirect impact on Treasuries from the purchase of JGBs and Bunds is likely to be smaller than the direct impact of central bank purchases of Treasuries.** Krishnamurthy and Vissing-Jorgensen’s 2013 Jackson Hole paper argued that Treasuries and Agencies weren’t perfect substitutes, which is why the Fed’s purchases of Agency MBS had an impact.  I have long thought the QE-Agency MBS-lower mortgage payments channel provided an important offset to the fiscal tightening the U.S. did in 2013, as mortgage refinancing put cash directly in the pockets of many households.

In subsequent posts, Emma and I plan to look into these points in a bit more detail, by disaggregating central bank flows by currency and comparing central bank demand (the sum of "foreign” reserve demand and “home” monetary policy demand) to government issuance.

A note on methodology. Asset purchases by the Fed, ECB, BoJ and BoE are easy to track directly. Reserve purchases come from summing the foreign exchange reserves of around 60 countries—a broad sample that replicates the IMF COFER data. China’s other foreign assets are added to the total (it doesn’t matter much, but it is a point of pride for me—these are assets on the PBOC’s balance sheet that walk, talk and quack like reserves). The dollar share of reporting economies is assumed to be replicated across the full sample (broadly speaking this produces the same result as assuming a constant 60 or 65% dollar share over time).

* Signalling here means signalling a credible commitment to hold policy rates low for a long time, i.e. enhancing the credibility of forward guidance. Michael Woodford, for example argued back in 2013 that this was the transmission channel that mattered.

** Technically, a central bank buying bonds creates bank reserves when it credits the account of the seller of the bonds with cash. QE reduces the supply of safe longer-dated bonds in the market (raising their price, and reducing their yield in theory) while adding to the supply of safe short-term assets (claims on the central bank).

The Most Interesting FX Story in Asia is Now Korea, Not China

All Sound and No Fury? Will The Trump Administration Get Tough on Currency in April?