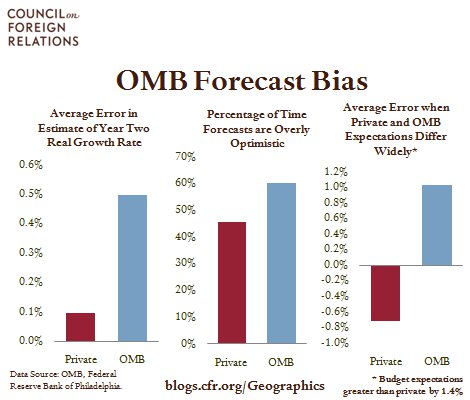 “We're not going to be running up the credit card anymore,” President Obama announced in introducing his 2012 budget.  That would suggest spending less.  But what is striking about the president’s actual budget math is how reliant it is on growth assumptions, rather than actual cuts in spending.  His Office of Management and Budget estimates robust growth of 4.4% in 2013 and 4.3% in 2014.  These assumptions are, however, significantly in excess of private sector “blue chip” consensus forecasts.  Private forecasts are 1.4 percentage points lower in 2013 and 1.5 percentage points lower in 2014.  If the private forecasts are used instead of the political ones, the president’s projected deficit average for 2013 to 2021 would have to be marked up from 3.3% of GDP to 4.3%.  That means about $1.75 trillion more added to the national debt.  Since 1976, the OMB has overestimated growth in the year after the budget by a substantial 0.5%.  This compares with private forecaster upside bias of only 0.1%.  In the case of the president’s budget, however, there is reason to suspect that the bias gap will actually be much larger.  This is because when the OMB and private forecasts differ widely (defined as being greater than 1.4 percentage points), the OMB’s upside bias rises to a full 1%.  In short, the president’s budget relies on rosy growth forecasts just to set the country on a path to lower but still unsustainable deficits.