Given how oil is back in the media spotlight and as oil markets brace for the implementation of the Iranian oil embargo, it seems as good a time as any to revisit the question of high oil prices and their impact on the U.S. economy (as well as revitalize my hitherto moribund blog output), discussed at length in this post.

According to the U.S. CPI, the average U.S. (urban) consumer currently spends about 9% of his or her income on energy. About 5.2% is on gasoline alone. 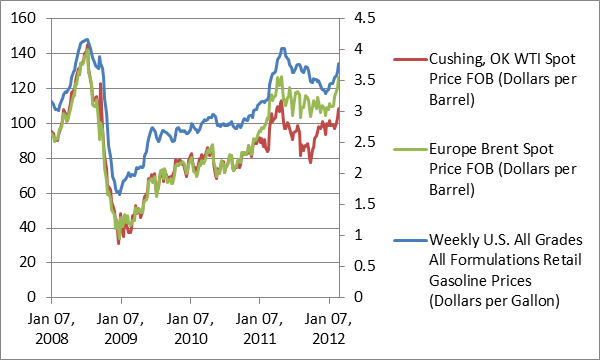 With the surge in Brent prices again to $125/bbl or near 100 euros, gasoline prices (even in cheap New Jersey) are getting close to the psychologically significant $4/gallon threshold. Some media still discuss WTI crude oil prices which are still trading at a significant discount to Brent but most refined product prices, especially in the U.S. Gulf and East Coast, are tracking more closely the Brent market, which is waterborne and a better recent indicator of global tightness.

So how high do Brent prices need to go for the economy to slow down or even go into a recession? One way to answer this question is to look at it historically.

So are we uncomfortably close to reaching stall speed again? The problem with this historical analysis is that our economy is a lot different of that in the 1970s or even 2007-08. Notably, as everyone knows, the economy is now a lot more energy efficient than the 1970s.

Even compared to 2008, U.S. domestic oil consumption has trailed previous consumption levels despite regaining our previous level of output and despite fairly strong output and labor numbers recently, as my colleague emphasized recently in this post. I believe we are seeing the delayed impact of the previous price spike on consumption behavior and improved conservation/efficiency. Also, we are enjoying a domestic production boom, particularly in natural gas, which may moderate the impact. 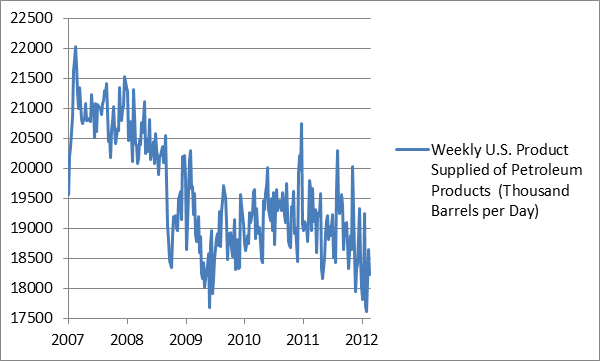 Another way to tackle this is to explicitly simulate an oil price shock using a U.S. macroeconomic model. There are certain advantages to doing this. For one, we can take into account feedback loops and second round effects.

For example, as consumers fork over more for gasoline, that also means less savings that will be put to use for investment. That also slows economic growth. Or higher oil prices may stimulate inflation, forcing the Fed to raise rates earlier, with consequences for growth.

The main disadvantage is the sheer hubris of trying to model something so complicated as the U.S. economy. Even with the most sophisticated and complex model, there is always something missing.

Still, as an intellectual exercise, I simulated what would happen to the current economy if real oil prices went any higher. I considered two types of shocks: a 10% price increase that either happens gradually over 5-6 quarters or that happens quickly within two quarters, and the same shock only with a 50% magnitude price increase. They would roughly correspond to Brent prices increasing to $135/bbl and $180/bbl respectively. (By the way, these are meant to be oil supply shocks, not a price increase that happens from stronger domestic demand.) 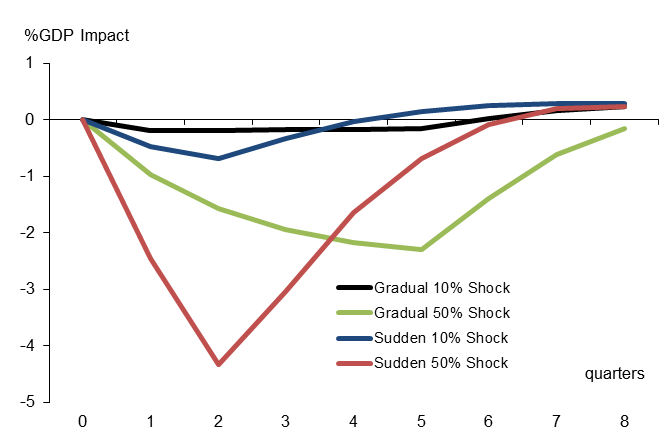 What I find is that it matters a lot whether the price increase is gradual, giving the economy time to adjust to it, or whether it happens quickly. It is also nonlinear, so a 50% price increase hurts more than five times as much as a 10% price increase.

Most economists are saying that the U.S. economy would otherwise be growing at somewhere between 2% and 3% this year. Hence, at least the model is saying that a 50% additional price increase or Brent oil prices at $180 (WTI at $150) for a sustained period may be enough to push the economy into an actual recession. That in turn would probably cause oil prices to slingshot back as the United States and global demand contracts.

So it looks like we still have some breathing room at least in terms of price. On the other hand, it may not take much for oil prices to rocket to these levels. Observe how jittery the markets were in reaction to rumors of a fire in Saudi Arabia recently. There is a lot of military hardware floating out near the Strait of Hormuz. Or take Russia or Nigeria. The oil supply side has plenty of hotspots to choose from.

The supply-side revolution from shale oil/gas may be promising better energy security soon but it’s not quite yet. There may be room for discussion of another stockpile release, something I plan to tackle in subsequent posts.

Missing the Point on Natural Gas as a Bridge Fuel

Examining Climate Change: A Threat to the Homeland