Koopman, Wang and Wei argue that one implication of their finding is that exchange rate appreciation will have a smaller impact on China’s trade surplus than is sometimes argued:

"Our best estimate suggests that the share of domestic content in China’s exports is about 50%, which is much lower than most other countries. This implies that a given exchange rate appreciation is likely to have a smaller effect on China’s trade surplus than for other countries."

I would put it a bit differently. Exchange rate appreciation should have a smaller impact on China than on countries with similarly sized export sector and higher-domestic value-added. But given China’s geographic size, China’s export sector is actually quite large relative to its economy. If the "Chinese content" of China’s goods export sector is around 50%, goods exports account for between 17 and 18% of China’s GDP. Exports of goods and services account for about 12% of US GDP -- and that number hasn’t been adjusted for imported content in US exports (Boeing, for example, imports components from around the world, so the US content of US aircraft exports isn’t 100%) so it isn’t really comparable to the adjusted Chinese data. I consequently would expect that exchange rate appreciation would potentially have a bigger impact on China’s trade balance than on the United States’ trade balance ...

The Koopman, Wang and Wei data also lets us estimate just how China’s exposure to the world economic cycle has changed over the past few years. I assumed that 50% of the value of China’s exports comes from embedded imports and thus subtracted 50% of China’s exports from both China’s export data and its import data. That provides, I think, a rough estimate of the value-added in China’s export sector as well as the goods China imports for domestic consumption. I then scaled everything to China’s GDP (calculated on a rolling 4q basis -- the quarterly jumps in GDP contribute to some of bumpiness of the data). The results are rather interesting, I think. 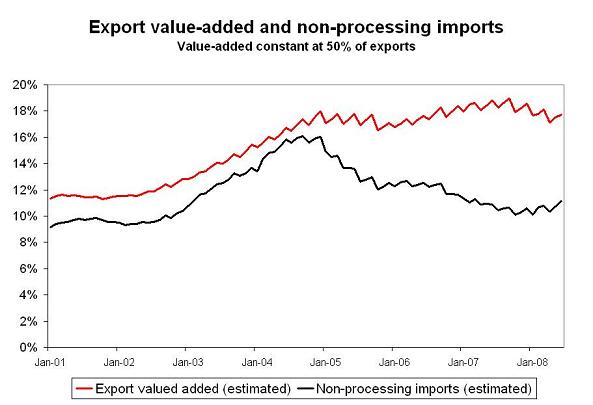 A few things jumped out:

First, the exports to GDP ratio rose rapidly from 2002 to 2005 and then started to level off.

Second, the big rise in China’s trade surplus has come from a fall in China’s imports (relative to China’s GDP) that started in 2005. It reflects the curbs on domestic bank lending and investment China introduced in 2004 to avoid overheating (while keeping the exchange rate undervalued). It also reflects - according to Jon Anderson of UBS -- the substitution of domestic Chinese steel and chemical production for imported steel and chemicals. Someone should write a paper arguing that China really is a Latin economy from the 1960s, and its recent growth stems as much from import-substitution (with inefficient sectors supported by an undervalued exchange rate rather than tariffs) as from export promotion ...

Third, "adjusted" exports to GDP are much higher than in 2000-01, so China should be more exposed to a synchronized slowdown in the US and Europe now than it was then. 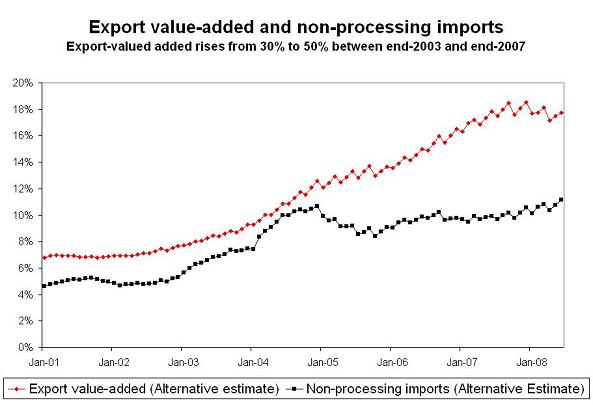 Either way, though, China’s export sector is now substantially larger, relative to its economy, than the US export sector. Its exposure to a broader global slowdown where it can no longer offset the slump in sales to the US with rising sales to Europe is real.

That doesn’t change the nature of China’s current policy choice. It could, at one extreme, keep the RMB from rising to help counter the slump in global demand for Chinese products while trying to limit domestic inflation entirely by restraining domestic demand. That basically means following the 2004 script in a less benign global environment. Or China could continue to allow RMB appreciation to limit inflation and relax its existing restraints on domestic demand to try to offset the (expected) fall in global demand for Chinese goods.