Skip to main content
Wen Jiabao’s Last Stand on Political Reform: Can he do it? Yes he can? 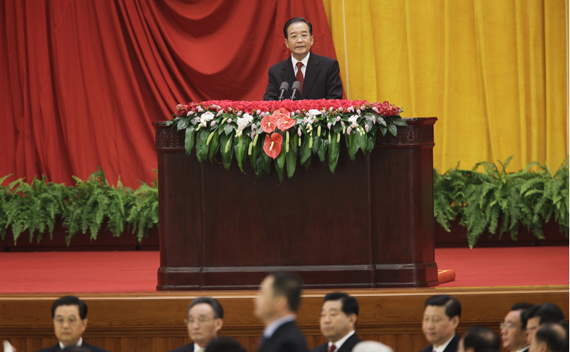 Chinese Premier Wen Jiabao has thrown down the gauntlet. In a fascinating interview with CNN’s Fareed Zakaria, Wen committed himself to fight for political reform, even in the face of what he acknowledges is serious adversity. The interview should lay to rest all the speculation surrounding two speeches Wen delivered over the past six months—one in Beijing and one in Shenzhen—that hinted at a newly energized commitment to political change. After these speeches, no-one seemed quite sure whether Wen was actually saying something new. Given that no-one else in the Politburo is saying anything like this—or has in the past twenty years—I think Wen’s remarks qualify as not just new but pathbreaking. Just look at some of what he had to say to Fareed:

• I believe freedom of speech is indsispensable for any country, a country in the course of development and a country that has become strong…I often say that we should not only let people have the freedom of speech, we, more importantly, must create conditions to let them criticize the work of the government.

• I believe and all the Chinese people have such a conviction that China will make continuous progress and the people’s wishes for and needs for democracy and freedom are irresistible.

• My view is that a political party, after it becomes a ruling party, should be somewhat different from the one when it was struggling for power. All political parties, organizations and all the people should abide by the constitution.

• In spite of the various discussions and views in the society and in spite of some resistance, I will act in accordance with these ideals unswervingly and advance, within the realm of my capabilities, political restructuring.

• I will not fall in spite of a strong wind and harsh rain and I will not yield till the last day of my life.

Of course, Wen’s remarks raise two additional questions. First why is Wen doing this? It seems likely that he is making these statements now because he is nearing the end of his term as Premier. He must retire in 2012, so this is really his last chance to move the political ball forward and to try to ensure a personal political legacy that reflects his true beliefs if not necessarily all his actions over the past thirty or more years.

Second, what will he actually do? There is a whole range of options here—he could take a stand on moving direct elections up the political hierarchy—something that has been stalled for two decades. He could also push to reverse the Tiananmen decision, following in the footsteps of his mentor Hu Yaobang, who rehabilitated many of the officials who were wronged during the Cultural Revolution. He could take up the cause of individuals whose rights have been abrogated—Liu Xiaobo, whom I discussed in my previous post, could certainly use a friend in the Politburo about now. Finally, Wen could simply continue to speak out on behalf of those throughout the country who support more political change and greater political participation. At the very least, this would lay the groundwork for the next generation of Chinese leaders.

In the end, Wen’s ability to accomplish anything during his final two years in office will depend on whether others in China’s ruling Politburo will stand behind him and give real force to his words, or whether they will leave Wen to twist in the wind. There’s probably not much reason for Wen to be optimistic on this front.