Japan’s energy policy resembles a playground seesaw, alternating between extremes. In 2010, Japan’s strategic electricity plan called for nuclear generation to double by 2030, from a quarter to half of the nation’s power needs. But after the Fukushima disaster in 2011, Japan shut down its nuclear power sector. This left the island nation dependent on fossil fuel imports for nearly 90 percent of its power, so Japan began racing to replace some of the shuttered nuclear capacity with solar power. Today, as Japan prepares to restart some of its nuclear generators, its utility companies are clamping down on solar adoption, and the government has scaled back solar incentives. 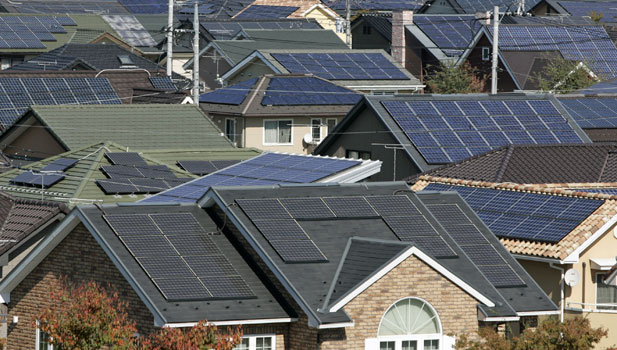 Now is the time for Japan to decisively choose a long-term energy vision that safely harnesses both nuclear and solar to improve its energy security, expand its economy, and advance its environmental goals as well as to set an example that the world can follow. At home, Japan’s energy security requires domestic energy sources—neither nuclear nor solar alone can ramp up quickly enough to meaningfully displace imports, but their joint contribution could offset one-third of the country’s energy needs by 2020. Both energy sources also represent an economic opportunity to develop domestic industries and benefit from technology exports.

Neither nuclear nor solar alone can ramp up quickly enough to meaningfully displace imports, but their joint contribution could offset one-third of the country’s energy needs by 2020.

Finally, neither nuclear nor solar power emits greenhouse gases, so a national energy strategy featuring both of these would enable Japan to commit to meaningfully reducing its emissions ahead of this year’s international climate convention in Paris. It would also be an important symbolic move for Japan, a nation just four years removed from a nuclear disaster, to demonstrate that countries transitioning to low-carbon energy sources can rely on safe nuclear energy in addition to renewable energy. For many developing countries, confronting economic imperatives that conflict with environmental responsibilities in the face of climate change, a full arsenal of clean technologies is crucial.

Japan’s recent policy swing toward curtailing solar to make room for nuclear only reinforces the impression that solar and nuclear must advance at each other’s expense. But the two technologies can and should coexist. To realize this vision will require policies representing credibility and courage, rather than caprice and complacency. Japan should make a realistic commitment to support renewable energy and to follow through on plans to liberalize a power sector dominated by monopolistic utilities, enabling solar and nuclear to complement each other in a fair market. The alternative—uneven support for solar and the maintenance of the nuclear-friendly utility structure—will perpetuate antagonism between solar and nuclear.

More From Our Experts
Sheila A. Smith
How Japan Is Upgrading Its Military
Elizabeth C. Economy
How 2020 Shaped U.S.-China Relations

A major 2015 UN report on global renewable energy adoption in the previous year highlighted Japan’s dramatic investment in solar: Last year, its $35 billion of solar investment was second only to China’s $40 billion. However, Japan’s emergence as a world leader in renewable deployment could be short-lived. First, electric utilities have begun to limit the amount of solar power on the grid. The utilities contend that incentives for solar were set too high in 2012, and the resultant overdevelopment has threatened grid reliability and increased electricity rates. Acting on utility recommendations, the government cut Japan’s solar feed-in tariff, the incentive rate for owners of solar panels to sell power back to the grid, which declined by 9 percent on April 1 with another 7 percent decline slated for July.

News that the Sendai nuclear power plant will reopen in June signals that utilities are eager to return to centralized nuclear plants that preserve the current utility structure. Japan is one of the only industrialized countries not to to have deregulated its electricity sector. Since 1951, each of Japan’s ten powerful utilities has held a regional monopoly over power generation, transmission, and distribution. Nuclear fits into that model. Utility companies prefer to own centralized nuclear power plants that generate a reliable return on capital rather than pay the owners of solar panels that the utility does not control and which must be integrated into its grid. However, Shinzo Abe’s administration has pledged to deregulate utilities by the end of the decade and split up vertically integrated monopolies, which would empower owners of solar to compete with nuclear plant owners for market share.

The utilities are correct to trumpet the benefits of nuclear for Japan. Nuclear energy is predictable, clean, and domestically produced. Moreover, with vigilant enforcement, nuclear can be safe: Japan’s courts hold nuclear reactors to extremely high safety standards, recently blocking the reopening of two reactors until utilities can demonstrate that the reactors will safely withstand another disaster like the Fukushima earthquake.

But solar power—especially the way that Japan has been installing it—is a complementary option for displacing imported foreign fuels and reducing emissions. Unlike in the United States and China, where the scale of solar installations resembles that of conventional power plants, over 80 percent of Japan’s solar is distributed generation, for example on rooftops, making Japan the largest market for small-scale solar in the world. Distributed solar complements the traditional, centralized, power generation system, offering benefits like improved resilience against cascading blackouts and reduced power loss over transmission lines.

Despite recent obstacles to solar deployment, some researchers project that installed solar will continue to grow in Japan at a healthy clip, and together with nuclear could displace one third of imported fuels by 2020. Reaching and possibly exceeding this figure will require reopening half of Japan’s nuclear capacity and continuing to encourage new solar adoption. Neither energy source alone can achieve the same level of deployment. 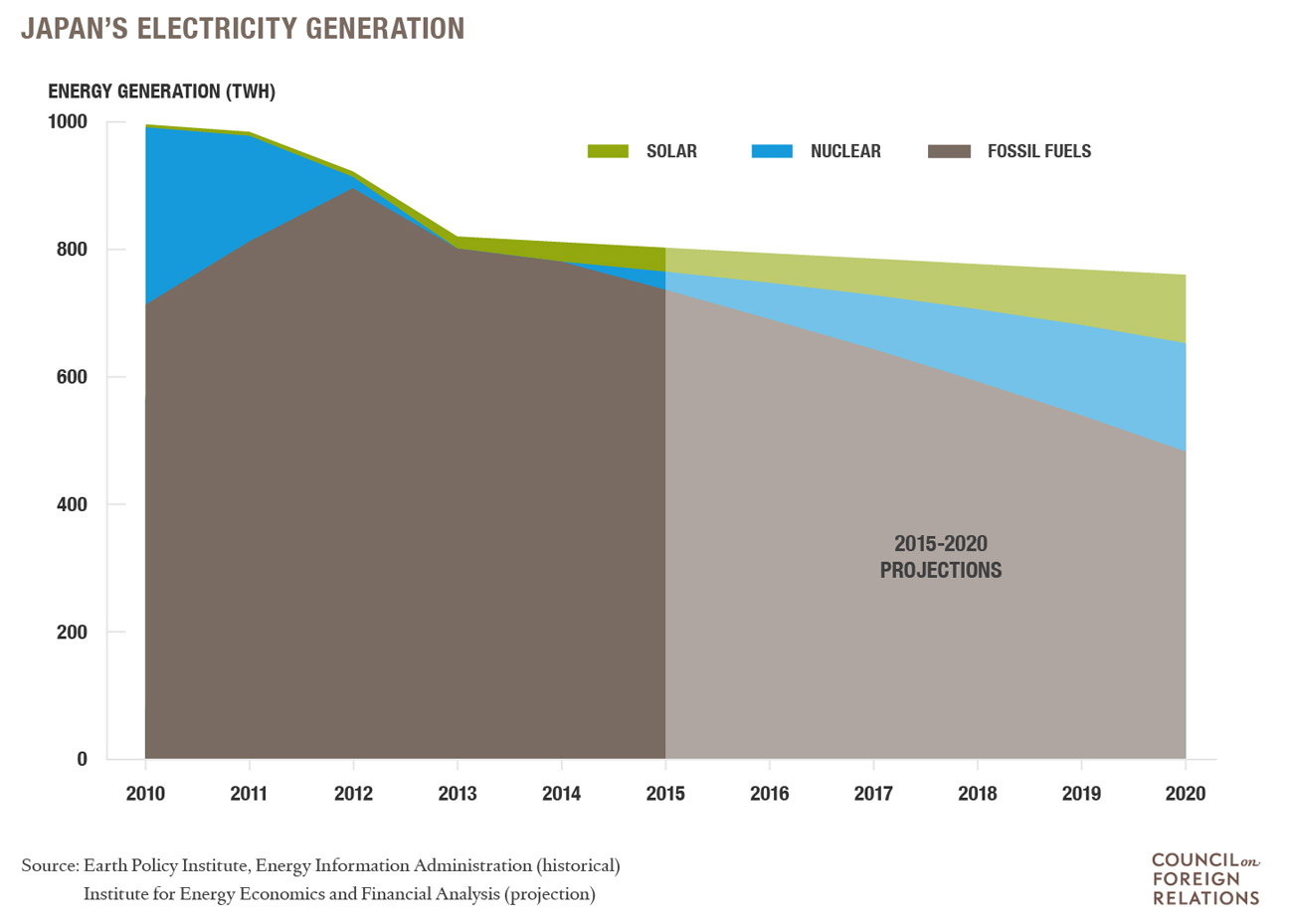 Nuclear and solar industries operating side by side could generate an economic windfall, even without counting the displacement of fossil fuels, on which Japan spends around 5 percent of its GDP to import. Japan already has an established domestic nuclear technology sector, and companies like Toshiba and Hitachi have been able to parlay domestic experience into lucrative international technology exports, even after Fukushima. Soon, the solar industry could follow suit. With a proud history of solar technology development by companies like Sanyo and Sharp, Japan is one of the only countries in the world that can support a thriving, vertically integrated solar industry. By selling panels locally, Japanese solar producers, who a decade ago commanded half of the global market, could achieve manufacturing scale and then compete anew for a share of the global solar panel market, projected to grow to $100 billion by 2020.

Finally, embracing both nuclear and solar, two clean-emission energy sources, would enable Japan to demonstrate leadership on climate change mitigation. Reports suggest that in June 2015 Japan plans to announce an underwhelming emissions reduction target ahead of the Paris climate conference in December. The likely target, a 20 percent reduction in emissions from a 2005 baseline, reflects an unwillingness to commit to an increase in clean energy energy production from nuclear and solar. Japan need only harness the resources at its disposal to set an example others can follow.

While utilities should continue preparing nuclear reactors for their safe recommissioning, Japan’s policy framework should support solar’s coexistence with nuclear rather than curb its adoption. The Abe administration should:

Although Germany provides valuable insight into transforming the electricity sector—compared with Japan, Germany has installed over ten times as much solar capacity—Japan should pursue a different energy vision, marshaling all of its domestic energy resources rather than permanently mothballing nuclear reactors. Whereas Germany could depend on domestically produced coal power to ease the transition from nuclear to solar, Japan lacks indigenous fossil fuel resources.

Japan would be wise to take advantage of two clean, domestic energy sources. In doing so, Japan would demonstrate an alternative transition roadmap to low-carbon energy sources, one that would serve as a much more instructive blueprint for developing nations struggling to power growing economies and limit their environmental footprint at the same time.

President-Elect Biden and his team come at a critical time for Japan-South Korea relations.