In October thousands of South African students shut down many of the country’s public universities and took to the streets against proposed tuition hikes. The peaceful protestors, confronted in a few instances by police, voiced dissatisfaction with the slow pace of the racial transformation of academic institutions a generation after the end of apartheid. President Jacob Zuma, who had proposed the 11.5 percent tuition hike, met with student leaders and scrapped the proposed increase, restoring calm for the moment. Zuma also backed down in December when faced by vocal opposition and negative reactions to his removal of the finance minister in, having replaced him with a relative unknown. 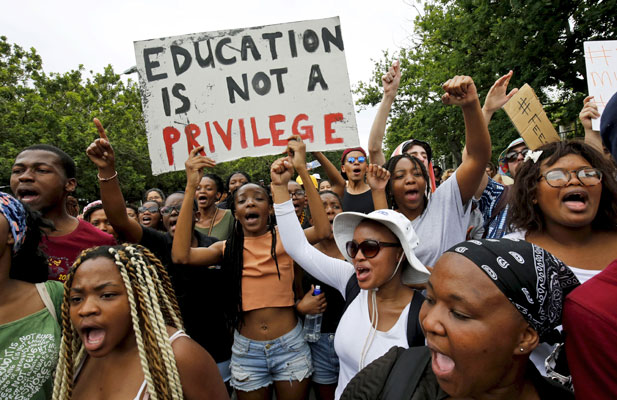 A health officer injects a girl with the measles vaccine at a school in Yemen’s central province of Marib, January 12, 2016. (Photo: Ali Owidha/Reuters)
More From Our Experts
Michelle Gavin
A Fresh Start Eludes South Africa

South Africa’s protests were about more than tuition hikes. They drew on the dissatisfaction of black students and their supporters, many born after the end of apartheid (known as the born-free generation), with the slow pace of postapartheid economic and social change. The protests largely remained confined to universities and did not spread to primary or secondary schools or the powerful trade unions. Nevertheless the strikes and demonstrations may presage greater pressure on the governing African National Congress (ANC) to accelerate social and economic change.

South Africa’s political transition from apartheid to nonracial democracy has been remarkably successful. South Africa has a vibrant democratic culture, free elections, and an independent judiciary. Its postapartheid constitution, widely regarded as sacrosanct, established institutions that protect individual rights and limit executive authority. South Africa’s guarantees of human rights are among the broadest in the world; it is the only African state that recognizes same-sex marriage as a fundamental human right.

By some measures inequality has grown since Nelson Mandela’s inauguration in 1994.

The current economic downturn, which began in 2014 and has seen the economy grow on average by less than 2 percent a year, exacerbates an already bad situation. With the exception of the universities, which are more racially integrated than many other areas of South African life, there continues to be remarkably little social interaction among the races.

Education and Its Discontents

The country boasts the continent’s strongest higher education system, though schools across the country vary widely in quality. Primary education for the majority remains, arguably, weaker than in neighboring Zimbabwe. (Zimbabwean students are taught in English, often making unskilled Zimbabweans more employable in South Africa than many black South Africans educated in traditional tongues.) But some of South Africa’s universities and secondary schools are internationally regarded as “world class.” These schools were established under apartheid or before for whites only but are now racially integrated. Blacks are often the largest racial group enrolled, yet white students, faculty, and administrators are overrepresented on campuses relative to their proportion of the population.

Primary and secondary schooling in most townships and rural areas is hardly better than the underfunded, underdeveloped, and decentralized education system that was imposed by the apartheid government. It remains characterized by poor physical facilities and undertrained, poorly supervised, and often demoralized teachers who strike frequently and are often absent from the classroom. Under apartheid there was chronic underinvestment in black education even as white students had access to teaching and facilities on par with high-level European or U.S. institutions. Postapartheid governments have been tasked with correcting these discrepancies.

As much of a fifth of the government’s budget (PDF) goes toward education, yet there are still many teachers with little more than a primary level of education and schools with one toilet for seventy students. There are also unresolved pedagogical issues considering that the country has eleven official tongues and language is an important part of personal identity. However, primary education in Tswana or Zulu ill prepares students for entry into the modern English-dominated economy or higher education.

Primary and secondary schooling in most townships and rural areas is hardly better than the underfunded, underdeveloped, and decentralized education system that was imposed by the apartheid government.

South Africa has a wide range of universities and technical schools of varying quality. Some are formerly black, “coloured,” or Indian institutions. However, it is the elite universities that are a natural flashpoint over the slow rate of postapartheid transformation. Official postapartheid policy has been to dismantle race-based education. Elite universities are now all racially integrated, but many blacks feel academically ill prepared, and, anecdotally, often find it difficult being in a “white” environment for the first time. Black university failure rates can be high. At the prestigious University of Cape Town, in 2010, 82 percent of white students completed their degree in five years, while only 48 percent of blacks did. Many blacks struggle to afford tuition. Tuition at the University of Cape Town in 2015 is ZAR 21,500 ($1,500) for undergraduates, excluding room and board. The average income of households headed by blacks was ZAR 60,613 (about $4,200), while for whites it was ZAR 365,134 ($25,300), according to the most recent census figures (PDF) figures.

The government’s clumsily proposed tuition hikes would have seriously and disproportionately affected black students. Protests against the hikes led to other demands, including larger black representation among elite university faculty and administration, a less traditional curriculum that is more relevant to their needs, and the removal of colonial symbols from university campuses. The perception that the culture of elite university education is white is accurate. Apartheid discouraged the creation of an educated class of blacks, and there is a dearth of black academics in the country. After apartheid most of the country’s few black academics were recruited for government service or by the private sector.

Many black university students believe the system has set them up for failure. But for students of any race at the elite universities, graduation ensures entry into an excellent job or profession. (Graduates have an unemployment rate of only 6 percent, a reflection of the nationwide shortage of the highly skilled and professionally trained. The national unemployment rate is 25 percent.) This reality tends to limit the political activism of blacks at institutions such as the University of Cape Town.

Violence against elite university students always has the potential for igniting a larger political crisis, but restraint on the part of the police and other security agencies in this instance prevented the protests from spreading to other segments of society. Should the concern over the slow rate of social and economic change in postapartheid South Africa ignite protests beyond universities, and should the security services respond with violence, pressure will build on the Zuma administration for social and economic changes beyond education reform.

In the meantime, hunger among black South Africans for formal education keeps student protests from morphing into a larger political movement. For most South Africans, university students, no matter their race, are more privileged than they are.