After more than three decades of rapid industrialization and modernization, China is on the cusp of becoming the world’s largest economy. Yet China’s economic miracle has imposed tremendous social costs. One third of China’s major rivers and 60 percent of its underground water supplies are polluted due to poor environmental regulation and unbridled industralization. Such environmental problems pose a serious and sustained threat to the health and well-being of the Chinese people.

China faces three major environmental health hazards: air pollution, water pollution, and soil contamination. As early as 2007, a World Bank study found that the health costs of air and water pollution in China amounted to about 4.3 percent of China’s GDP. In 2012, PM2.5 particulate pollutants, considered to be the most hazardous to human health, were linked to 670,000 premature deaths from strokes, lung cancer, coronary heart disease, and chronic obstructive pulmonary disease. A 2013 study also found that air pollution is associated with a reduction in life expectancy at birth of about 5.5 years in northern China. Meanwhile, the widespread production and use of toxic chemicals in agriculture and manufacturing industries have contaminated water and farmland, contributing to the emergence of more than four hundred “cancer villages,” areas where cancer rates are unusually high. 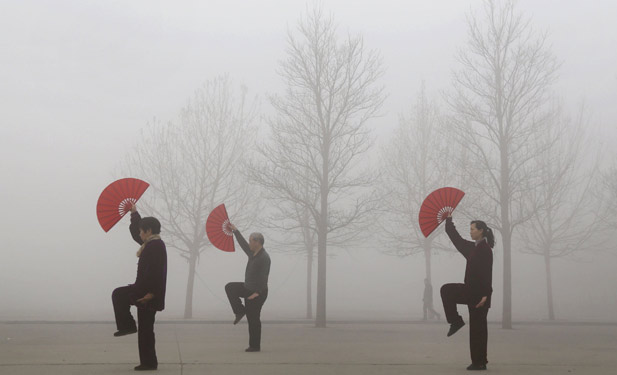 The harm caused by China’s environmental health crisis is testing the resilience of the Chinese state. Enormous social costs threaten to undo the achievements of more than three decades of unprecedented development. As these costs increase, public discontent over environmental health issues is also on the rise, putting the country’s social-political stability at stake. Between 1995 and 2010, the number of environment-related petition letters increased, from 58,678 to 701,073, according to official Chinese sources. Leading China experts say an ecological catastrophe, followed by an ineffective government response, could provoke nationwide protests that could threaten the very survival of the regime. Although new tools are available to Chinese policymakers, such as technologies obtained from international exchange, they must confront a complex set of factors in dealing with environmental health challenges. They include an overwhelmingly development oriented leadership, demographic pressures, integration in the world economy, and leaders’ fears about social-political stability. The  pressing health issues demand a multifaceted governance response with a more unified approach to crisis management, improved financial and bureaucratic capacity, the willingness to harness  the energies of civil society.

Environmental protection was not formally included in China’s fiscal budgeting until 2006.

Amid public outcry over record-high PM2.5 levels in northern China, Premier Li Keqiang in March 2013 declared “war” on pollution. In September of the same year, the government issued an Action Plan for the Prevention and Control of Air Pollution, which aims to reduce air pollution by more than 10 percent from 2012 to 2017. In April 2015, Beijing unveiled a long-awaited plan that vows not only to shut down factories that pollute water supplies, but also to boost to more than 70 percent the share of water suitable for human consumption in seven major river basins by 2020.

In May 2015, the communist party’s central leadership issued an “opinion” that proposed to evaluate officials on both their economic and environmental record. Yet this new policy rhetoric appears to contradict China’s performance-based legitimacy, which relies on delivering sustained economic growth. Since 1989, China has been governed by an implicit social contract: the regime commits to improving the material well-being of the people in exchange for the latter’s support of the party’s monopoly over political power. Herein lies in the dilemma for Chinese leaders: The party must keep economic growth above 7 percent to ensure employment and keep the people happy. Yet, these new measures to combat pollution are likely to undermine efforts to sustain GDP growth (at least in the short run). The recent economic slowdown exacerbates this dilemma. In January 2015, China’s growth rate edged down to 7.4 percent, its weakest expansion in over two decades. The International Monetary Fund recently revised down China’s 2015 GDP growth forecast to 6.8 percent. Just last month, the Chinese finance minister warned that unless China maintains a growth rate above 6.5 percent, the country has a greater-than 50 percent chance of slipping into the so-called middle-income trap, which occurs when a a country with middle-income status gets stuck at that level, instead of being elevated to the income levels of the truly developed countries. 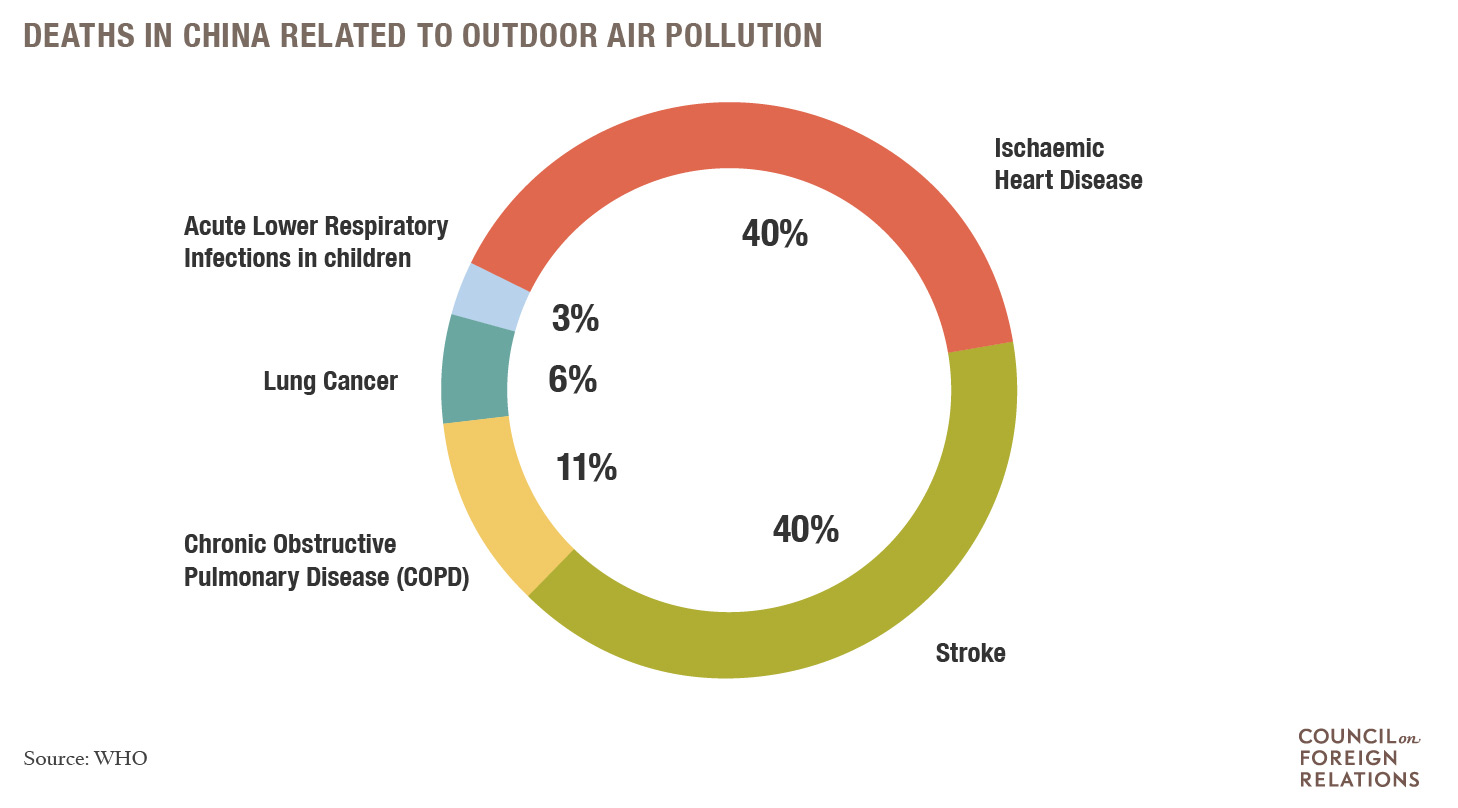 Recent reports have found that China’s antipollution measures are hurting businesses in regions already affected by the economic slowdown. Yet overall,  GDP growth remains the centerpiece of China’s policy agenda and government officials will continue to  pursue economic development, even if it is detrimental to environmental protection.

Government efforts to address the environmental health crisis are further complicated by an increasingly polarized Chinese society.  Establishing the relationship between the environment and health  is notoriously complex. Given the range of hazards individuals may be exposed to on a daily basis, it is extremely difficult to establish a causal relationship. Despite the indiscriminate nature of an environmental health problem, health effects are not felt equally in every community or even by each person within a community.

As with all public policy issues, proactive government responses to the health crisis run the risk of creating both winners and losers. Departments and nongovernmental actors promoting environmental protection would see their power and prestige increase, while polluting industries (including those who work for them) stand to lose. When Under the Dome, a TED Talk-style documentary investigating China’s air pollution went viral in China in March 2015, the newly appointed minister of environmental protection personally thanked the producer, Chai Jing, for her work. Still, petrochemical industry insiders disputed Chai’s claims that lax quality standards for petroleum were a primary contributor to China’s worsening air pollution.

The tension between environmental protection organizations— both official and nongovernmental—and powerful vested interests reflects an increasingly polarized Chinese society. Despite the popularity of Chai’s video, a large number of Chinese netizens debated the validity of its arguments about the relationship between business practices and pollution and the role of the state vis-à-vis the market. Many officials and intellectuals questioned Chai’s motives and integrity. Although initially there seemed to be government approval for the documentary, Under the Dome’s pointed criticism of the resistance of powerful interests to tougher fuel standards and the failure of government agencies to implement strong regulatory standards soon led top leaders to have second thoughts. Within a week of its release, the video was blocked by government censors.

Among all of China’s provincial units, only Shanghai and Guangdong explicitly proposed to increase the share of environmental protection spending to 3 percent of their GDP from 2011 to 2015. The situation is unlikely to improve any time soon in light of the recent economic downturn. In February 2015, year-on-year national public fiscal revenue only grew by 0.26 percent, while public fiscal spending was up by more than 55 percent over the same period. China’s languishing real estate market, in particular, has hurt local budgets. Local governments rely heavily on land sales, which account for a quarter of their revenues, on average, across China. In February, year-on-year national land transfer revenue dropped by 36 percent.

Finally, tackling the crisis calls for changes that extend well beyond one sector or industry. Unlike traditional social crises that typically fall under the jurisdiction of a specific government agency, environmental health issues do not correspond to the institutional responsibilities of any particular government agency. Conflicts of interest and disputes over responsibility are thus likely to create tension and lead to bureaucratic disputes. To address such complex challenges, a powerful consensus has emerged in the international development community that argues that the best way to achieve health, social, environmental, and economic goals is through synergies across sectors. This multi-sectoralism, or “whole of society,” approach requires not only the improvement of in-country coordination among different government agencies (health and environment agencies as well as ministries responsible for land use and development planning), but also the participation of nongovernmental actors, including business and civil society organizations.

Government efforts to address the environmental health crisis are complicated by an increasingly polarized Chinese society.

Unfortunately, China’s crisis management is almost entirely dominated by state actors, and in the absence of permanent and independent institutions to oversee crisis management and coordination, the lines of criss-crossing authority have become exceedingly complex and cumbersome. Take water pollution prevention and control. The State Council Action Plan lists seventy-six subgoals. While local governments are expected to implement all of them, seventy-two of them require interagency coordination at the national level, which involves two to eight government ministries, and usually requires one central ministry to serve as a lead agency.

The Ministry of Environmental Protection (MEP) is the designated lead agency for nearly half of the issue areas. For a weak bureaucratic actor such as MEP, this ad hoc, issue-specific institutional arrangement makes effective coordination difficult to attain and let alone sustain. Furthermore, as CFR’s Elizabeth Economy has observed, Beijing’s emphasis on large-scale, top-down initiatives fail to take into account that effective enforcement of environmental health standards occurs at the most micro level.

Unlike many other countries, China does not have robust civil society groups to offset its bureaucratic capacity deficit. Instead of embracing social actors, such as NGOs and victims of pollution, as partners and facilitators for positive policy change, the state continues to view them as potential troublemakers and discourages institutionalized social participation in the policy process. This is not an equation for state-society synergy. Coping with the environmental health challenges will require Chinese leaders to undertake more profound reforms.