U.S. President Barack Obama has sought to reassure Gulf Arab states that neither their security nor their relationship with the United States would be jeopardized by a nuclear deal with Iran. But in recent talks with the six Gulf Cooperation Council (GCC) member states, Obama did not offer what they most wanted: a mutual-defense treaty, says Vali Nasr, dean of John Hopkins University’s School of Advanced International Studies.

Though Arab states fear that the United States is retrenching from the region and tilting toward Iran, “a straight shot to a grand bargain or normalization” between Tehran and Washington is not in the offing, Nasr says. As for Saudi threats to match Iran’s nuclear capabilities, Nasr says, “Right now it’s bluster.” 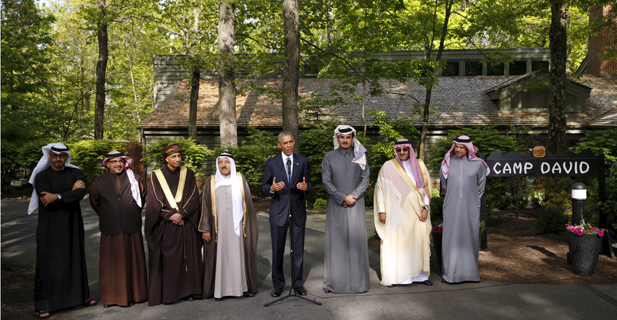 Did President Obama succeed at Camp David in convincing the Gulf Arab states to accept the nuclear negotiations with Iran?

The administration’s goal was to be able to say it had given adequate assurances to its allies, but that clearly did not happen. The allies wanted something more than just a perfunctory meeting; they wanted some concrete assurances from the administration. It was clear to them, even before they came to Camp David, that that wasn’t going to happen.

"In the eyes of the Arabs, a security pact is the only thing that would actually show a commitment by the United States."

The broader issue is not just Iran’s nuclear deal; it’s that you have an administration that has made a commitment to leave the region. The Arabs are looking for security pacts that would reconfirm the United States’ commitment to the region, and it’s clear they’re not going to get that. So, that puts the entire future of the relationship with the United States open to question for them.

What do you make of Obama’s position that the United States will provide the Gulf Arab states with external security—a security guarantee short of “non-NATO ally” status—but the regimes’ biggest threats are domestic?

There is a difference of opinion here. The United States is willing to address threats to Arab states’ borders, such as a land or air invasion. Most Arab countries are not expecting a land or sea invasion from Iran. Arab leaders view the [principal] threat as Iran meddling in their domestic affairs where it sees opportunities, whether these are disputes over power such as in Bahrain or Yemen, or another cleavage between the youth and traditional powers or between the poor and the rich.

The Obama administration sees internal affairs issues as vulnerabilities that the Arabs have to address themselves. It is, in effect, telling the Arabs that it’s not willing to protect them against what they view to be the primary threat.

Even on the promise of defending them externally, the Arabs wanted this to be consecrated in a treaty, whereas what the United States has signed up for is to give them even more weapons to do it themselves. There is no Article 5 [principle of collective defense] of NATO here.

The underlying fear among the states seems to be that a nuclear deal will not be a one-off transaction, but rather, lay the groundwork for a grand bargain between Washington and Tehran. How plausible is a U.S.-Iran rapprochement?

The Arabs take it seriously. The way they’re behaving indicates that they believe the nuclear deal will be successful, and that there could be potential for greater [U.S.] cooperation with Iran.

There could be a lot of [U.S.] talking points about the U.S. and Iran having different opinions on things like Syria or Yemen. But that’s not the way Arab behavior suggests that they see the picture. [For Washington,] alliance management means understanding the way your allies see their interests, what their worries are, how they see the picture—not how you see the picture.

Is a nuclear deal likely to cause the United States to reshuffle its Middle East policies?

"Iran and the United States may find collaboration in one arena, conflict in another."

The path to more normal [U.S.-Iran] relations is fraught with a lot of challenges, but the negotiations broke a major taboo. It’s changed some basic facts: that the United States and Iran would never talk to each other; that they would never agree on anything; that U.S. statesmen and Iranian statesmen could not have working relationships.

But after the deal, both countries will have some difficult domestic politics to contend with. The implementation itself could have a lot of hiccups. And if the deal is supposed to have an impact on the Iranian regime, which is an unwritten assumption for normalization, that’s not going to happen quickly or without conflict.

The Middle East is collapsing all around Iran and under the United States’ feet. Syria is in a state of utter collapse, Iraq is teetering on the edge, and Libya is about to explode. Yemen has been plunged into an insurgency and war with its neighbor. And then there are a lot of other vulnerable countries. Iran and the United States may find collaboration in one arena, conflict in another.

The nuclear negotiations are a big deal. The nuclear deal would be an even bigger deal. But that does not point to a straight shot to a grand bargain or normalization of ties. A smoother relationship between the United States and Iran may take the better part of a decade to happen.

What do you make of the claim that a nuclear deal could make the region less stable—that freeing Iran’s resources will encourage its adventurism and invite reciprocal interventions or use of proxies by Iran’s Arab rivals?

It may, it may not. The freeing of those resources will also demand that Iran stay the course with the United States. Iran’s involvement in these fights is not just a function of how many resources it has; it’s a function of how vital it sees these conflicts to its national interests. If the nuclear deal becomes part of Iran’s national interest, that could be a mitigating factor.

Countries in the region might see these conflicts as an issue of life or death, something that they would pursue, if not in an overt manner, by other means. Iran will still have a pathway to intervene in Syria or Iraq or Yemen irrespective of whether [the United States] lifts the sanctions.

That’s possible. But any country that goes down that path would have to do a cost-benefit analysis. Would it be willing to risk being put under international economic sanctions? Ultimately, if Saudi Arabia examined what it would mean, what it would cost, and how they would get there, they may decide that they wouldn’t want to do it. A Saudi nuclear weapon will have implications for Israel and for the nonproliferation treaty.

Right now it’s bluster. And what is not on the table is what would be the United States’ reaction. The United States sanctioned Pakistan for its nuclear program even though the Pakistanis have the same argument: that if India has it, we should have it too. Generally, [the U.S.] response to this sort of a decision has not been to buy strategic arguments for nuclear capability at face value and give them carte blanche. Maybe the one country we allowed to do that was Israel, but with Pakistan, India, Iran, Libya, and North Korea, the United States and the international community weighed in with their punishment to prevent them from going nuclear. Those countries paid a cost for pursuing that course, regardless of whether they had a valid strategic argument.