In December 2014, workers broke ground on the Nicaragua Grand Canal, a planned 175-mile-long canal through Nicaragua. Three times the length of the Panama Canal, engineers say Nicaragua’s canal could eventually serve 5 percent of the world’s cargo traffic. Proponents of the canal argue that it will bring much-needed jobs and commerce to the country. However, critics charge that few details of the deal have been made public and say that the environmental and social costs of constructing the canal could be catastrophic. 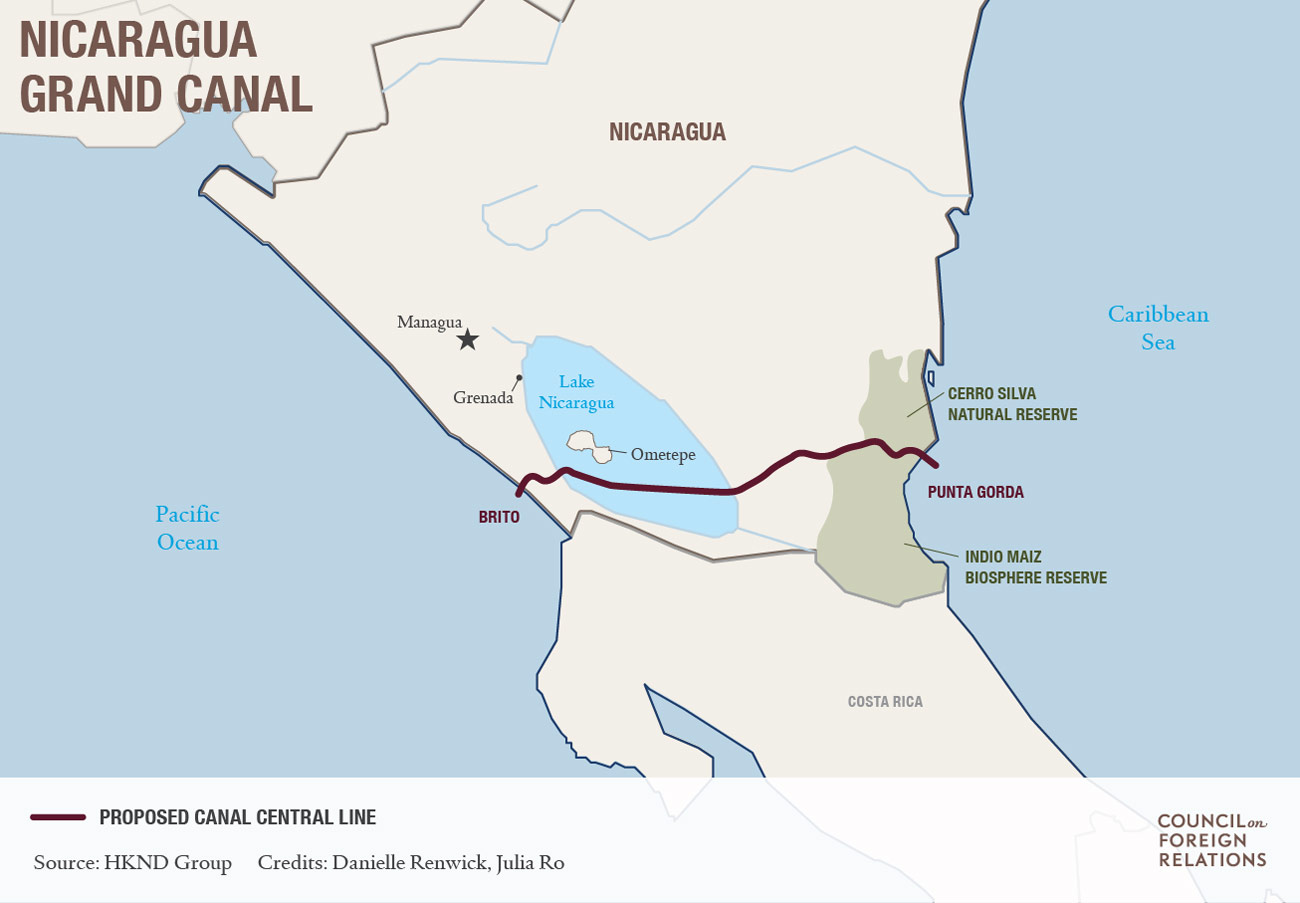 Why is Nicaragua building a canal?

More From Our Experts
Alice C. Hill
Examining Climate Change: A Threat to the Homeland
Elizabeth C. Economy
How 2020 Shaped U.S.-China Relations
Heidi Crebo-Rediker
Infrastructure and the SOTU: Time for Congress to Make Something Out of Nothing

Talk of building a canal across Nicaragua goes back to the Spanish conquistadores of the sixteenth century. The United States gained rights to build a canal through Nicaragua in 1901 but opted to build in Panama instead. Some of President Daniel Ortega’s more recent predecessors also proposed building a canal to spur economic growth, but they struggled to secure financing and legislative backing. Ortega, who had ruled Nicaragua as part of the Sandinista government (1979–90), returned to office in 2007 and proposed to build a canal in 2012.

Attending a groundbreaking ceremony in December 2014, Ortega said the canal would generate wealth, yielding “greater possibilities to completely eradicate poverty” in Nicaragua, the second-poorest country in the hemisphere, after Haiti. Proponents of the canal say it could double formal employment in the country and lift four hundred thousand people out of poverty by 2018. The Nicaraguan government says the canal would boost annual economic growth from 4.5 percent in 2013 to 14.6 percent in 2016. (To date, those figures have not been independently verified.) The country of six million has a per capita income of $1,790, and 42.5 percent of the population lives in poverty, according to the World Bank.

Critics of the plan are skeptical that the economic benefits of the canal will reach the poor. “The government hasn’t introduced a business plan that tells us how we’re going to get out of poverty,”  says Jorge A. Huete-Perez, a biologist who is studying the environmental impact of the proposed canal.

The Panama Canal, currently the region’s only waterway connecting the Atlantic and Pacific Oceans, has been a boon to Panama’s economy. It generated $1.91 billion in toll revenues in fiscal year 2014. (The country’s 2013 GDP was $42.6 billion.) Panama’s shipping and financial services industries have earned it nickname “Singapore of Latin America”  and its economy is among the fastest growing in the region.

More From Our Experts
Alice C. Hill
Examining Climate Change: A Threat to the Homeland
Elizabeth C. Economy
How 2020 Shaped U.S.-China Relations
Heidi Crebo-Rediker
Infrastructure and the SOTU: Time for Congress to Make Something Out of Nothing

How is the canal being built?

In June 2013, Nicaraguan lawmakers granted the the Hong Kong Nicaragua Canal Development Investment Company (HKND)  the rights to construct and manage a canal that would bisect the country. Estimating the project’s costs at $50 billion, HKND says the canal will be functional by 2019. Wang Jing, HKND’s chairman and CEO, has no previous experience in infrastructure. Despite having hosted senior Chinese officials at his telecommunications company, Beijing Xinwei Telecom, he says HKND functions independent of the government. Wang has reportedly invested $200 million in the canal project and has said that he plans to launch a public offering for additional financing. Secrecy surrounding the canal’s financing has led some analysts to suspect Beijing’s involvement in the project.

When the leftist, Sandinista-controlled legislature granted HKND the concession to build the canal [PDF], it also signed over the rights to projects surrounding it, which could include airports, resorts, ports, and free-trade zones, for fifty years, with the option to extend the concession for an additional fifty years. The agreement gives HKND the “right to possess, occupy, use, or perform any activities upon all government owned and privately owned real property which may be reasonably necessary or desirable” for the canal.

“That any government in the twenty-first century would sign a piece of paper like that is flabbergasting,” says Richard Feinberg, a professor at the University of California, San Diego’s School of Global Policy and Strategy and a nonresident senior fellow at the Brookings Institution. “It completely assigns all sovereignty rights not to a foreign government, but to a foreign company.”

Nicaragua is slated to gain 1 percent ownership over the canal each year. The concession calls for HKND to pay Nicaragua $10 million per year while the canal is in operation. By comparison, Nicaraguans received more than one hundred times that amount in remittances in 2013.

HKND hired the UK-based firm Environmental Resources Management to conduct an environmental feasibility study, and McKinsey & Company is reportedly conducting an economic feasibility study, which is due in April 2015. Critics say such studies should have been conducted before the legislature handed over rights to the canal to Wang’s company.

Is there demand for a new canal in the region?

Nicaragua’s canal, which would connect the Pacific to the Atlantic through Lake Nicaragua,  would be one of the largest man-made commercial waterways in the world. Shipping firms say the route would provide faster travel time than the Panama Canal, which currently handles around 5 percent of global shipping traffic.

Both the proposed Nicaragua Canal and a $5.25 billion expansion of the Panama Canal that is currently underway and slated for completion next year are responses to a rise in global shipping traffic and the growth of container ships: A 2014 study found that global shipping traffic quadrupled between 1992 and 2012, driven largely by growth in China’s manufacturing exports. This has spurred demand for higher-capacity containerships. According to HKND’s project description, the canal is “intended to primarily provide transit for ships too large for the expanded Panama Canal.”

However, some experts have raised doubts about whether Central America needs another canal. Francisco J. Miguez, an executive at the Panama Canal Authority, told the Miami Herald he was doubtful there was a market for the proposed Nicaraguan canal’s higher capacity, and Jean-Paul Rodrigue, a transportation and trade expert at Hofstra University, has said that few ports in the United States and Latin America are equipped to accommodate supersized container vessels. In 2014 Rodrigue told NPR that Nicaragua’s proposed canal was “commercially very, very dubious."

What is the potential ecological and social impact?

Some scholars and nongovernmental organizations have warned that the construction of the canal could have catastrophic environmental and social effects. According to a 2014 article in the science journal Nature, the canal would destroy nearly a million acres of rainforests and wetlands, among them the Cerro Silva Natural Reserve. Biologists Axel Meyer and Jorge A. Huete-Perez, who coauthored the article, write that Lake Nicaragua, which supplies an estimated two hundred thousand people with drinking water, runs the risk of becoming contaminated by dredging and then later by shipping traffic. The canal would also likely introduce salt water and invasive species to the freshwater lake, threatening native fauna. Meyer and Huete-Perez say the canal threatens the habitats and livelihoods of native endangered species and could dry out some of Nicaragua’s rivers. They also write that dredging above Nicaragua’s tectonic plates could set off tremors and flooding.

Some reports estimate that as many as one hundred thousand people, including several indigenous groups, could be displaced by canal construction. Nicaraguan law [PDF] prohibits the sale, lease, or seizure of indigenous lands. Various civil-society groups have gone before the Inter-American Commission on Human Rights with concerns about land expropriation. In December 2014, thousands of Nicaraguans took to the streets of Managua to protest the canal. The Nicaraguan government and HKND acknowledged that some people will be displaced, but have said that residents will be fairly compensated [PDF]. (The government has not released official estimates.) Critics say provisions for compensation severely undervalue the properties at risk.

What is Nicaraguan public opinion of the canal?

According to a 2015 CID Gallup poll, 41 percent of Nicaraguans strongly support the canal, and only 17 percent of those polled reported not supporting the canal at all. However, only 19 percent of respondents said they felt they understood the development of the canal, while more than half reported knowing little or nothing about it.

Among the chief complaints of those opposed to the canal are that the decision to build it was made with almost no public consultation and that many details of the deal remain unknown. HKND was the only concessionaire to bid for rights to the canal. It was granted those rights before any independent economic or environmental feasibility studies were conducted. “It is unclear how [HKND] came to exist,” says Huete-Perez, “and when you do things in an untransparent manner, of course people are going to start speculating about corruption.”

Ortega, a close ally of the late Venezuelan president Hugo Chávez and often a critic of the United States,  is a politically polarizing figure both domestically and abroad. His Sandinista party controls Nicaragua’s legislature and judiciary. Freedom House, a Washington-based pro-democracy group, has reported that Ortega rules the country [PDF] with “increasing disrespect for the constitution, electoral integrity, and the rule of law.” Transparency International ranks Nicaragua 133rd out of 175 countries in its corruption index and human rights groups have alleged that he restricts press freedoms.

Is the Chinese government involved in the canal?

Although Beijing denies involvement in HKND’s bid, some experts claim that the Chinese government holds sway over  the consortium. The canal project occurs at a time of major Chinese investment in the region. In January 2015, President Xi Jinping pledged $250 billion in investments in Latin America over the next ten years, and Chinese officials have projected trade with Latin American countries would expand to $500 billion over the next decade.

China relies heavily on commodities from the region, including copper from Chile and Peru, oil from Venezuela and Ecuador, and soy from Brazil and Argentina. Latin American businesses and governments, for their part, have borrowed $119 billion from China since 2005. (Experts say Chinese loans to the region before then were negligible.) China-Nicaragua ties, however, have been “fairly limited in recent years,” says Margaret Myers, director of the China and Latin America program at the Inter-American Dialogue. “Trade is negligible and investment is minimal, aside from this recent canal project,”  she says, adding that she does not believe Beijing was behind the HKND concession. The Inter-American Development Bank projects as much as $1.5 trillion will be spent on infrastructure projects in Latin America over the next decade.

Biologists Axel Meyer and Jorge A. Huete-Perez discuss the canal’s environmental risks in this Nature article.

This National Geographic piece gives an overview of the Nicaraguan  canal project.

Biden and Democracy in Nicaragua

Despite all the speeches about the importance of human rights, the Biden administration is standing by as democracy is crushed in Nicaragua

Nicaragua in Crisis: What to Know

Political and economic unrest in Nicaragua could stoke the flames in a region where insecurity has forced tens of thousands to flee in recent years.

Suzanne Maloney, vice president and director of the Foreign Policy program at the Brookings Institution, sits down with James M. Lindsay to discuss what’s at stake when Iranians head to the polls later this week.