On Saturday, November 12, eighteen of the Arab League’s twenty-two members voted in favor of an eight-point resolution regarding the escalating conflict in Syria; Yemen and Lebanon were opposed, Iraq abstained, and Syria did not vote. Most notably, the resolution suspended the Syrian government from participating in the Arab League until the Bashar al-Assad regime fulfills its previous commitments to end violence against civilians and enter into political negotiations with the Syrian opposition.

The Arab League’s actions on Libya in mid-March and Syria more recently are the rare examples of a regional organization sanctioning a member state for behavior within its own sovereign territory. The act and precedence of condemning a member state for the treatment of its population opens up every other state to similar criticism in the future.  It should be noted that given the massive human rights abuses by the Libyan and Syrian security forces against both non-violent and armed opposition movements, the Arab League opprobrium was wholly deserved in both cases.

However, when examining the regime characteristics of the other Arab League members, it is likely that Libya and Syria will not be the last states to be condemned by the organization. Put simply, the Arab League must be the least free and most unstable grouping of states in the world.  The only democracy is Comoros, which held a peaceful election in June 2008, but previously endured through more than twenty coups since its independence from France in 1975.

With the lack of freedom and democracy in these states, it is hard to imagine how the ruling regimes survive in their current forms in the face of ongoing or potential protest movements. If those regimes respond with force—and Bahrain and Yemen have already done so—the Arab League can either continue condemning each other, or be condemned itself for selective and hypocritical behavior. See below for how Arab League members rank in three widely-used indices of freedom and stability: Center for Systemic Peace’s Polity IV data; Freedom House’s Freedom in the World survey; and The Fund For Peace’s Failed States Index. 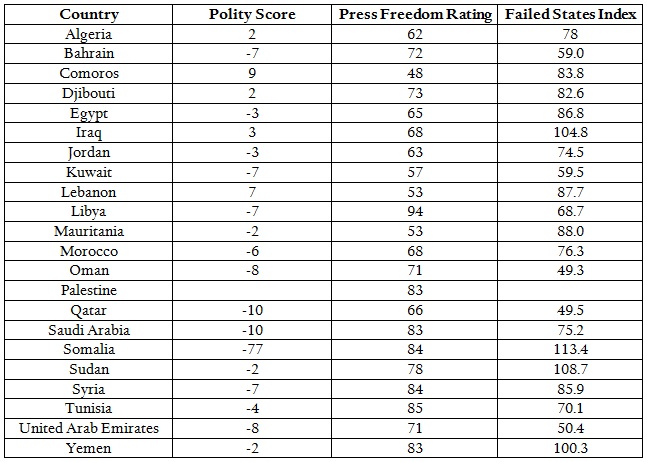 Updated in June 2011, The Polity Score is the aggregate measure of six components that record the levels of democratic and autocratic authority in the governing institutions of each country, which is captured on a 21-point scale ranging from -10 (hereditary monarchy) to +10 (consolidated democracy). Out of the Arab League countries, 16 out of 22 are designated as autocracies. By comparison, the United States received a 10.

In May 2011, Freedom House published its annual Freedom of the Press report that assesses the level of press freedom in each country, determined by an examination of three categories: legal environment, political influences and access to information, and economic pressures. Each country receives a rating between 0 (most free) and 100 (least free). Arab League countries comprised 25 percent of all countries designated “not free.” By comparison, Finland ranked first with a score of 10 and the United States received a score of 17.

Published in June 2011 by The Fund for Peace, the Failed States Index (FSI) is an annual ranking of 177 nations based on their levels of stability and domestic pressures. The scores are calculated for each country by taking into account twelve key political, social, and economic indicators. The 2011 FSI is made up of data aggregated between January 2010 and January 2011, which excludes the events of the Arab Spring and subsequent revolts and conflicts in the Middle East. For the fourth year in a row, Somalia tops the FSI, and there are four Arab League states in of the top thirteen “most at risk.” The United States scored 34.8 and Finland is ranked as the most stable state at 19.7.

You Might Have Missed: Civilian Protection, IAEA Report, and More

What to Know About the Afghan Peace Negotiations