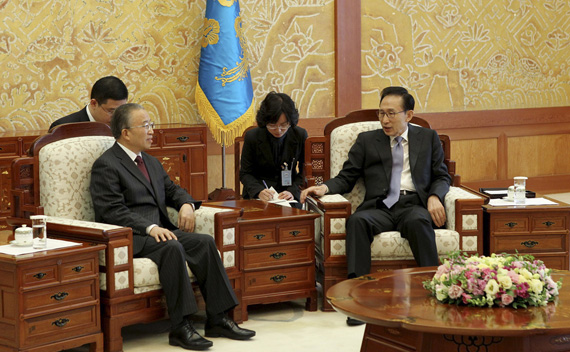 China’s response to North Korea’s artillery shelling of South Korea’s Yeonpyeong Island last week has been relatively rapid compared to the slowness of its response to the sinking last March (it took three weeks for the Chinese government to express its condolences in response to the sinking of the Cheonan). But, as underscored in Sunday’s New York Times Week in Review and Aidan-Foster Carter’s article in Foreign Policy, it is unlikely to satisfy American expectations. China’s proposal of an emergency session of the six parties is a non-starter that confuses form versus substance. Resumption of Six Party Talks would be a way of affirming what President Obama called last June China’s “willful blindness” toward North Korea by perpetuating the illusion that diplomatic efforts to deal with North Korea have not failed.

As a practical matter, there are four preconditions for Six Party Talks to be viable as a framework for addressing current issues on the agenda. First, as the United States and South Korea have emphasized, it is necessary for North Korea to show tangible steps as evidence of its willingness to return to the path of denuclearization. This is a main purpose of the talks, but there is no basis for resuming talks unless all parties affirm their commitment to the denuclearization objective. Absent that commitment, a call for five-party talks would be the next best option.

Second, Six Party Talks have little prospect for success in the absence of a stabilized inter-Korean relationship, but this will be difficult to achieve especially following the Yeonpyeong shelling. Third, Six Party talks cannot succeed in the absence of a U.S.-DPRK channel for dialogue. North Korea has systematically placed obstacles in the way of such a dialogue since the Obama administration has come into office; revelations to American visitors regarding Pyongyang’s progress in developing an enriched uranium capability were a step in exactly the wrong direction. Fourth, there must be evidence that China can effectively persuade North Korea not only to cease provocations but to integrate with the international community, but there has been precious little evidence of China’s persuasiveness since Premier Wen Jiabao’s visit to Pyongyang in October of 2009.

China faces an even more difficult challenge in managing its diplomacy toward the two Koreas following the Yeonpyeong incident, especially given the damage North Korea has done to China’s own national security interests. The Chinese foreign ministry objected to U.S.-ROK exercises involving the USS George Washington in its exclusive economic zone but could do nothing to prevent them from going forward. Lee Myung-Bak requested in a meeting with State Councillor Dai Bingguo that China take a “fairer and more responsible position” in dealing with the two Koreas, and China and North Korea are set to exchange high-level visits this week. A first step toward creating the conditions for resumption of Six Party Talks would be evidence that China can persuade North Korea to take concrete actions to restore the basis for Six Party talks. Otherwise, China’s call for a return to Six Party Talks will stand as a symbol of China’s own diplomatic limitations rather than as a serious effort to tamp down tensions on the Korean peninsula.