The following graph, prepared with help from Arpana Pandey, plots the average increase in China’s reserves (defined broadly, to include hidden reserves) over the last 3 months v my best estimate (taking flows through London into account*) of China’s Treasury and Agency purchases. It speaks for itself. 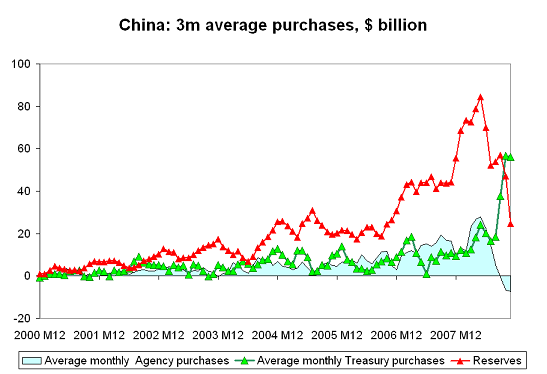 The countries that are really running down their Treasury portfolio -- Korea and Brazil -- are countries whose reserves are falling and need the cash. Russia is running down its Agency portfolio for a similar reason. It really needs the cash. Its short-term Agency holdings are down to $13.7b. They were close to $100b -- 496.8b -- in December of 2007.

The big stories in the TIC data, it seems to me, are:

-- The ongoing reallocation of central bank portfolios toward short-term Treasuries. That reallocation has been huge. Central banks held $$276.8b of t-bills at the end of September. They hold $427.2b at the end of December. And judging from the Fed’s custodial data there is every reason to think that total rose in December. Foreign central bank demand for safe and liquid assets rose at the same time as private demand rose.

-- The ongoing retreat of private capital from global markets, or what I previously called the reversal of financial globalization. Foreign investors sold $56b of US long-term securities in November, and another $36.6b in October. Central banks that needed cash to cover large capital outflows from their own economies or that simply wanted to shift to short-term t-bills accounted for the majority of those sales, but private investors were selling too. Americans have sold about $35 billion of foreign securities in each of the last three months as well.

* London flows had no real impact on the recent data.

*** Some of these short-term inflows may be a reallocation away from private custodians, and thus may not represent a true increase in demand for US assets.

How badly were the Gulf’s sovereign funds hurt by the 2008 crisis?