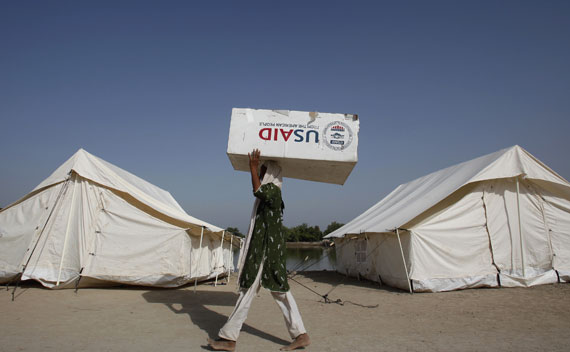 The Program on International Policy Attitudes at the University of Maryland (PIPA) has just released the results of one of my favorite poll questions:  What percentage of the federal budget goes to foreign aid? PIPA has been asking this question for fifteen years now, and the result is always the same:  Americans have a grossly inflated sense of how many of their tax dollars go to foreign aid.

In its most recent survey PIPA found that the median estimate of the share of the federal budget devoted to foreign aid was 25 percent. [So half the respondents think the number is higher, and half think it is lower.]  That’s up from the 20 percent median estimate found in most previous polls.  Perhaps the higher number in this survey reflects more talk in the news media about aid to countries such as Afghanistan or Pakistan or Haiti.  Or perhaps it reflects the public’s tendency during hard economic times to worry that even more of their money is going overseas.

The punch line here, of course, is that only about 1 percent of the federal budget goes to foreign aid.

Not surprisingly, the estimates vary by level of education

The public’s inflated sense of foreign aid spending helps explain why so many politicians are quick to volunteer aid programs for the budget axe.  (The fact that most people wrongly believe that all foreign aid is spent overseas doesn’t help either.)  And foreign aid is clearly on the chopping block these days.  The Simpson-Bowles budget plan would pare foreign aid by several  billion dollars.  The incoming House Majority Leader, Eric Cantor, and the likely incoming chair of the House Appropriations Foreign Operations Subcommittee, Kay Granger, have made it clear that they intend to reduce foreign aid.

As my colleague Michael Levi noted a few weeks ago, proponents of foreign aid need to figure out which programs they can and should protect.  A public with a grossly inflated sense of its own generosity abroad is not going to come to their rescue.

The Corrosion of World Order in the Age of Donald Trump