On February 25, in the aftermath of two bombings that killed at least twenty-seven, President Goodluck Jonathan said that the tide has turned against Boko Haram. Over the past week, this has been a consistent message from senior Nigerian officials.

Reuters, also on February 25, published a highly useful map that shows the local government areas controlled by Boko Haram. It shows that the Nigerian military has driven Boko Haram out of three towns: Baga, Monguno, and Marte. Otherwise, there appears to have been little change in the areas where Boko Haram operates. 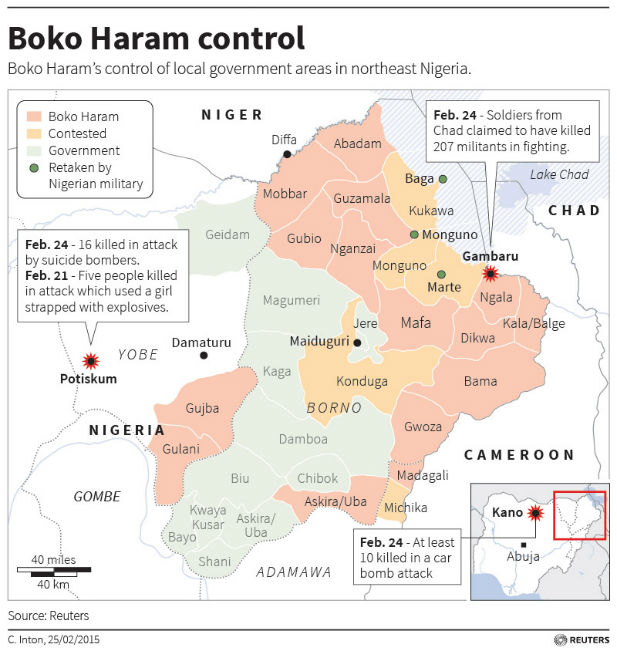 What is the significance of the Nigerian military’s reoccupation of the three towns?

Towns in northeast Nigeria appear to change hands frequently. Unlike ISIS in Syria and Iraq, where a major goal is the permanent occupation and governance of territory, Boko Haram appears to be highly fluid. Hence, Boko Haram does not need to hold territory to be effective. Boko Haram is also adept at melting back into the countryside when confronted by superior forces.

At the time the Nigerian government postponed presidential elections from February 14 to March 28, the rationale was that the military could not provide security for the elections process because it was about to launch a major offensive against Boko Haram. Government officials said that the six week period would be sufficient to defeat Boko Haram and thereby allow elections to go forward in the northeast.

However, in an interview in ThisDay on February 22, President Jonathan said, “We cannot expect to win the war against such terror hundred percent before the elections anyway, but we will not allow them to keep all the territories they hold.” The Nigerian security services’ reoccupation of Baga, Monguno, and Marte may meet President Jonathan’s criteria for elections to go forward.