This week’s Economics focus notes “Last year just over $2 trillion of capital—direct investments in firms or purchases of bonds, equities and other loans—came from investors outside America, mostly private ones. This was more than enough to cover the $730 billion current-account deficit and leave enough over to finance $1.3 trillion of investments by Americans overseas.”

That is true. But a lot has changed since the end of 2007. The Economist’s argument is based on out-of-date data. Gross inflows to the US over the last four quarters of data were only $1130b. That is down from $2.6 trillion in the four quarters before the crisis, i.e. q3 06 to q2 2007. The strong data for 2007 largely reflects pre-crisis flows. 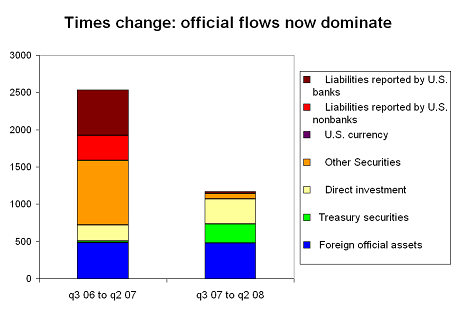 The US data indicates that official flows accounted for $475b of the $1130b in total flows over the last four quarters of data. But that data hasn’t been revised to reflect the survey data – and it consequently understates official flows from China in particular. If past patterns hold, the official sector will end up accounting for most of the $260b of “private” purchases of Treasuries, bringing total official flows up to around $735 billion.

Looking ahead, I expect official flows to fall -- largely because the US trade deficit is now liekly to fall rapidly start. And the sale of US assets abroad may provide much more financing for the US deficit than in the past. But over the past four quarters, the scale of official inflows truly cannot be understated. Personally I think $735b is on the low side, given the likely scale of dollar reserve growth.

One fact that hasn’t gotten as much attention as it should is that gross private capital flows – both inflows and outflows – have absolutely collapsed over the past year. The crisis has led to an enormous contraction in private flows – with less interbank lending and far smaller foreign purchases of US corporate bonds and equities. 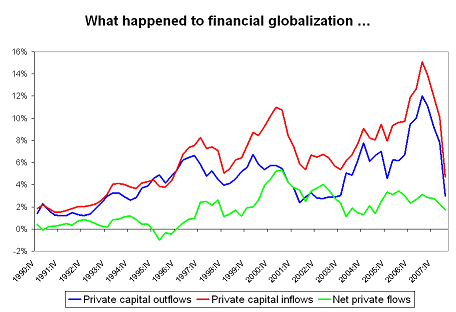 Data for both charts come from the US BEA.

The fact that the collapse in gross flows didn’t prompt a major contraction in the current account deficit suggests – at least to me – that these gross flows weren’t ever providing much financing for deficit. They seem to have been a product of the shadow financial system’s preference for operating out of low-tax jurisdictions. Offshore entities borrowed funds from US investors to buy US securities, producing a surge in gross flows but little net financing.

Finally, it seems like a bit of a stretch to link the dollar’s recent rally to the “size, liquidity, efficiency and transparency” of US financial markets.*

The one thing that the US financial sector truly excelled at over the last four years was the production of illiquid and opaque securities. There is a reason why the US government felt compelled to become the buyer of last resort certain kinds of securities. For that matter, even the most liquid of US markets aren’t necessarily that liquid any more (see John Jansen and Alea).

Once (or perhaps if, given all that is going on today) the crisis passes, the literature on both financial globalization and risk transfer through securitization needs to be reexamined.

*This isn’t a criticism of Forbes paper so much as the way the argument in Forbes paper was applied to the recent data – data that Forbes didn’t look at in her paper. I do think Forbes methodology understates the role of official flows -- and misses the way the expansion of the shadow financial system impacted the data on gross flows -- but that is a different issue.