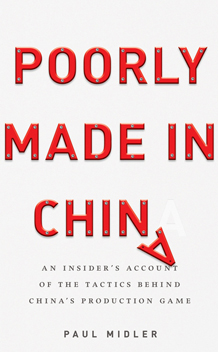 With the summer winding down, I was searching for a good China read and came across Paul Midler’s Poorly Made in China. Midler has spent close to two decades living and working in China, the latter decade helping foreigners navigate the challenges of manufacturing in China. I’m not sure how I missed this book when it first came out, but I am glad that it crossed my desk now. It is one of the best business books on China that I have encountered in a long time.

Most of the book follows Midler’s adventures working with American businessmen, such as Bernie in bath products and Frank in waste management. These are not brief anecdotes but in-depth case studies, told in Midler’s engaging and, at times hilarious, voice.

What makes the book more than simply an entertaining read, however, is Midler’s ability to look at the foreign businessmen whom he advises through the eyes of the Chinese manufacturers. Midler did not simply travel to China, bounce around for a while and write a book based on his impressions. He offers a deeply nuanced understanding of the Chinese business psyche, making it clear why it is both so entrancing and so difficult to do business in China. In case after case, he demonstrates that Chinese factories begin with a terrific level of service and quality manufacturing, only to downgrade the quality and ratchet up the price once the foreign partner is too invested to bail easily and has already transferred significant know-how—he refers to this as "quality fade." When and if foreign companies discover that their Chinese manufacturer has cheapened the quality of the product (sometimes with fatal results as in the melamine scandal a few years back), the Chinese manufacturer simply sells the product in developing economies, where the inspection standards are generally not as rigorous. Midler’s broader point, here, is that we are foolish to think that the United States is China’s most important market—Chinese manufacturers have several markets for different types and quality levels of goods. They can afford to continue to do business their way. Midler also suggests that the unwillingness of Chinese workers to speak out when they realize that something is awry is a pervasive cultural more: whistleblowers are nor heroes but rather "disruptive forces" who are "seeking personal gain." More often than not, Midler illustrates, Americans are completely flummoxed by their dealings with their Chinese partners—although over time, some of them find ways to get back on equal footing.

I certainly can’t take credit for discovering this book: it was awarded "Best Book 2009" by the Economist. I can, however, jump on the bandwagon and agree that this is a "must read" for anyone engaged in the world of China and a "should read" for anyone else.