That big fall off is hard to understand.   The pace of RMB appreciation has picked up.  Chinese deposit rates have increased (though they still are lower than CPI inflation).   US rates are falling.   The underlying economics suggest that money should be moving into China, not moving out.

And the “noise” in Chinese policy circles suggests ongoing concern about capital inflows.   Policy actions too: China recently increased the reserve ratio by a full percentage point, sterilizing the equivalent of $75b of reserve growth.

Something doesn’t quite add up.

So what is going on?

My best guess is that China’s government is once again shifting foreign exchange to the state banks to manage – and probably also placing pressure on the banks and state firms to hold on to more dollars in order to reduce the pressure on the central bank.

Assertion not backed up by data, though, isn’t all that persuasive.

So – with a bit of help from Logan Wright (Stone and McCarthy/ Survived Sars) and Arpana Pandey of the Council on Foreign Relations – I did a bit of digging.    Logan helped me find the foreign currency balance sheet of the Chinese banks; Arpana helped track down historical data.

And I think I found some support for my hypothesis.  Chinese reserve growth -- once the CIC and fx held by the banks is factored in -- still looks set to be close to $500b this year.   Stephen Green's forecast still looks to be basically right.  Hot money inflows haven't disappeared.  That may constrain the PBoC's willingness to raise interest rates.  Graphs follow ..

A couple of key lines in the banks’ foreign currency balance sheet jumped out at me.

The first is the line called “other foreign liabilities.”    This line rose sharply a couple of months after the PBoC shifted funds to Huijin to inject into two commercial banks in 2003.   I assume “other foreign currency liabilities” matches – at least in part –the “other assets” line in the PBoC’s balance sheet (“other assets include the PBoC’s stake in Huijin). 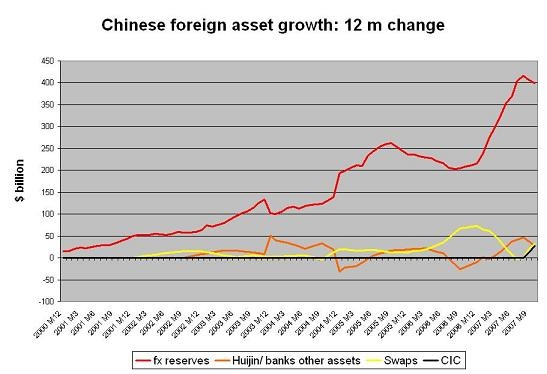 A sharp fall in the increase in swap lines in the first part of 2007 in turn coincides with the sharp increase in the pace of Chinese reserve growth.   The data basically fits.

The outstanding stock of “purchases and sales of fx” and “other fx liabilities” also matches, generally speaking, the banks holdings of fx denominated foreign securities (so called portfolio investment).  These securities could be domestic securities denominated in foreign exchange, but they are likely foreign securities.   Here though I should note that the gap between the two widened in q3 2007.

As a result, I am reasonable confident these line items provide some indication of the fx that has been shifted to the banks.  It is an imperfect measure to be sure, but it is the best I have.

It is interesting to see how adding these lines to the rolling 12m reserve growth changes the picture. 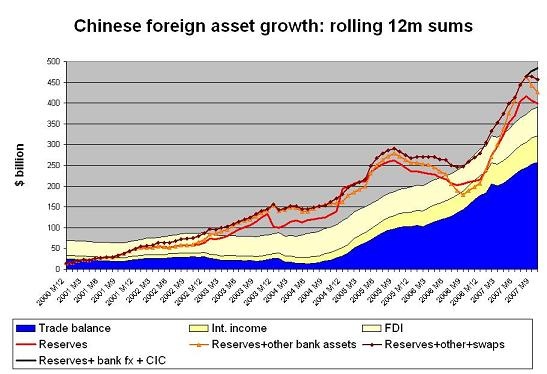 The red line is reserve growth (after adjusting for valuation)

The dark red line adds in changes in swaps.   These start to impact that data in late 2005, but really become significant in late 2006.   Add in this data, and the mysterious hot money outflows of late 2006 disappear.

That certainly fits with the statements coming from policy makers.

What of the high-frequency data? 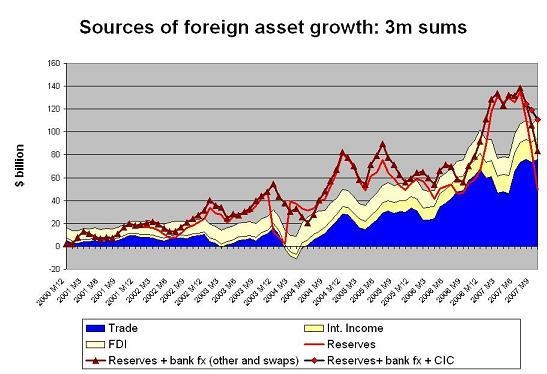 It shows far smaller hot money outflows in late 2006.  But it still suggests outflows, not inflows.   I am not sure I believe that – a broader range of financial institutions and state enterprises could have been encouraged to hold dollars.

It show a very sharp increase in the pace of hot money inflows in early 2007 – along with a sharp increase in the overall pace of fx asset accumulation.   The particularly strong inflows in q1 (the gap between reserve growth and surplus from trade, interest income and FDI) likely reflects a policy decision to allow the state banks to repatriate the money they raised from their offshore IPOs.

I am not sure I believe that either.   The FT's Richard McGregor  thinks that about $180b flowed into China in the third quarter ($160b if this number needs to be adjusted for valuation effects) -- a number that would be consistent $40-60b of additional inflows.

$180b incidentally is an enormous sum.   The latest Fed flow of funds data suggests that the US Q3 current account deficit might be close to $175, as the income balance looks to have improved.    McGregor's number suggests that as much money may be flowing into China as flowed out of the US from its current account deficit.   Even $120b in three months is a lot by any objective measure.

And if I had to bet, I would bet that China's true foreign asset accumulation is closer to Richard McGregor's number than the $120b I was able to find.  I doubt my adjustments capture all “state directed foreign exchange” outflows.

With domestic dollar deposits falling, the banks are “short” dollars – particularly given that borrowing in dollars is an attractive way for Chinese firms to take a punt on the rmb dollar (Dollar lending by the banks is up $45b in 2007) .   The PBoC supposedly has made it very difficult for the banks to borrow from abroad, forcing the banks to hold fx against their domestic fx denominated loans rather than sell the fx to the central banks  (this though doesn’t show up cleanly in the banking data).   Any dollar the bank has to hold for itself is a dollar that the PBoC doesn’t have to buy.

Of course, if the bank is using some of its RMB (ultimately from RMB deposits) to buy FX in the market that it doesn’t then turnaround and sell for RMB, it is building up a mismatch on its books.    I heard rumblings in Beijing that this is indeed what is happening …

And then there is are other sources of outflows.

Retail mutual funds that offer the chance to buy into the H share market are the most obvious one.   China has approved quotas that will allow significant outflows (see Jon Anderson on the FT.com), but most of the quotas have yet to be filled.

Pressure on state-owned enterprises to hold more foreign exchange is another potential source of outflows -- and my adjustments wouldn’t capture the buildup of foreign assets outside the banking system.