Skip to main content
Too Chinese (and Russian) to fail?

The epicenter of the US financial crisis now seems to have shifted to Fannie Mae and Freddie Mac -- the government sponsored enterprises that dominate the market for US housing finance. Few institutions matter more for the US economy. They currently buy or guarantee an astonishingly high fraction of all new mortgages in the US. Absent that financing, home prices would fall further -- dragging down the value of a lot of the "private" mortgage-backed securities issued at the height of the crisis, and health of a lot of (troubled) private financial institutions.

But Fannie and Freddie aren’t just "too-big-to-fail" US financial institutions. Not anymore. They are now global financial institutions. They have been central to the process that has turned US mortgages into securities held by the world’s central banks. Official -- meaning central bank -- holdings of Agencies have soared over the past two years. The US "TIC" and survey data suggests that central banks now have at least $925 billion in "Agency debt." That is almost certainly an understatement: the monthly TIC data tends to understate official purchases, leading to large revisions when the more accurate survey data is released in June. Total official holdings are likely above a trillion -- or about 20% of the $5 trillion or so in Agency debt outstanding. 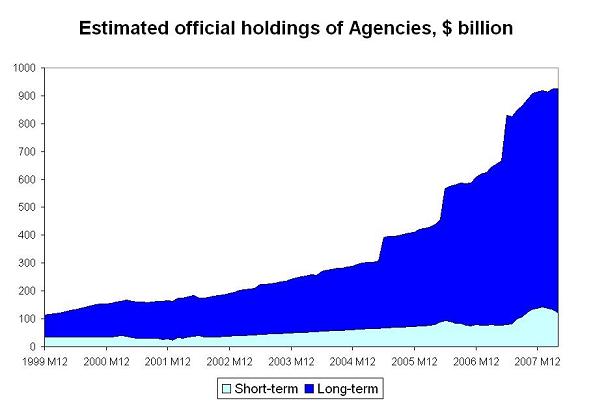 As a result, the governments of China and Russia are now almost as exposed to the "Agencies" as the US government. 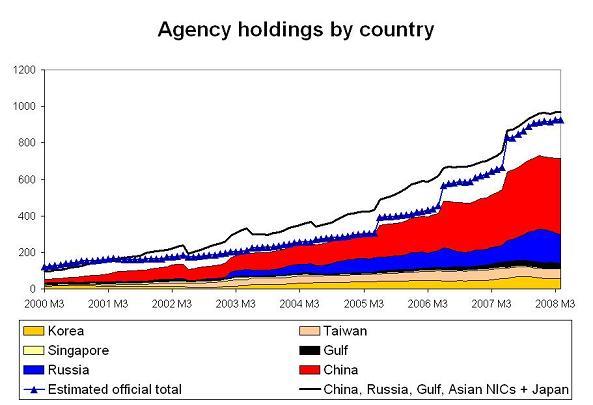 * This graph makes use of data collected by the CFR’s Arpana Pandey.

China, according to the US data, has $422 billion of long-term Agency bonds. That is roughly 10% of China’s GDP. It is also almost certainly understates China’s holdings. Based on the pattern of revisions in past surveys and the scale of China’s foreign asset growth, I would guess that China now holds between $500 and $600b of Agencies -- or about 10% of the outstanding stock.

Russia, according to the US data, holds $90 billion of long-term Agencies. Russia also has a large portfolio of short-term Agency bonds (with a maturity of less than a year). Based on past survey data, I would guess that almost all of Russia’s holdings of "other short-term negotiable securities, negotiable CDs and other custodial securities" are short-term Agencies. That brings Russia’s total holdings of Agencies up to $156 billion -- or roughly 10% of Russia’s GDP (a bit more actually).

Japan, according to the US data holds $251 billion of Agencies -- but not all of these are held by the Ministry of Finance and the Bank of Japan. Japan started shifting from Treasuries to Agencies in late 2005 or early 2006 (see the technical notes below, and note that official holdings start to grow faster than the sum of Chinese, Russian and Asian NIC holdings around this time). Japan still has far more (relative) exposure to the Treasury market than the Agency market. But Japan’s government also likely has around $150 billion of Agencies, a sum equal to about 3% of Japan’s GDP.

China’s exposure to Blackstone (bought for $3 billion, now worth less) and Morgan Stanley (bought at $5 billion, now worth less) pales relative to its exposure to the Agency market. China undoubtedly would view Roubini’s plan to force holders of Agency bonds to accept a haircut in return for a government guarantee as a policy directed at China. Sure, China would get a mark-to-market windfall if its Agencies became Treasuries (i.e. backed by the full faith and credit of the United States), but SAFE would argue that it plans to hold its Agencies to maturity in any case, so it won’t get more than the bond’s face value. I would certainly expect that Vice Premier Wang is on the phone to Paulson this weekend, politely asking how exactly the US plans to backstop the Agencies.

At Davos, former Treasury Secretary Summers noted -- correctly -- that accepting large capital infusions from sovereign funds into "private" US banks and broker-dealers meant that, should any such bank or broker-dealer subsequently collapse, its collapse would be a foreign policy issue. CITIC never made an investment in Bear, so that particular bullet was dodged -- at least for now.

But the same point applies to the Agencies. The enormous increase in central bank holdings of Agencies has made their fate a matter of high politics, not just a debate over getting incentives right and good financial policy.

If -- as I suspect is likely -- the Agencies are too big, too important to the housing market and too Chinese for their debt ever not to be honored on time and in full, that has another implication:

$1 trillion is roughly 25% of China’s GDP. That is a rather concentrated position. It shouldn’t be a surprise if China thinks it should have a voice shaping big US policy choices.

In some sense, it is remarkable that the system for channeling the emerging world’s savings into the US housing market - a system that relied on governments every step of the way, whether the state banks in China, that took in RMB deposits from Chinese savers and lent those funds to China’s central bank which then bought dollars and dollar-denominated Agency bonds, or the Agencies ability to use their implicit guarantee to turn US mortgages into a fairly liquid reserve assets -- hasn’t broken down after the "subprime" crisis. The expectation that the US government would stand behind the Agencies is a big reason why.

That allowed the US government to turn to the Agencies to backstop the mortgage market once the "private" market for securitized mortgages dried up, as emerging market governments continued to buy huge quantities of Agencies.

And it now seems that this game will break down on the US end before it breaks on the emerging market end. The Agencies will run out of equity before central banks lose their willingness to buy Agency paper.

History, it is said, rhymes rather than repeats. Bretton Woods 1 broke down because some key governments weren’t willing to import inflation from the US. Bretton woods 2 has survived -- even intensified -- the subprime crisis because many emerging market governments have preferred importing inflation to currency appreciation. China seems more worried about textile job losses than inflation, negative real returns on household deposits or the risk of financial losses on its (large) holdings of Agencies.

The costs of a system that channeled huge sums of emerging market savings into the US real estate market -- contributing to a bubble in US housing that is now collapsing, at a significant cost to all involved (private market players who bet that housing would only go up, the US government, and emerging market governments who bet on the dollar) and now a surge in inflation in the emerging world -- are now quite apparent. It has produced a massive misallocation of resources on a global scale. Nouriel is right. Emerging market savers will get a negative real return on their dollars because of the currency risk, and the US has over-invested in housing.

But the hard work of shifting to a new system likely will have to wait until the crisis in the current system is resolved.

Note: I updated the second graph to add in Japan’s holdings in a way that illustrates, I hope, why not all of Japan’s Agencies are held by the BoJ and MoF, and I also added a bit more in the text on Japan. See the technical notes for more on Japan. I also would recommend Dr. Hamilton’s post -- he does a great of explaining the Agencies balance sheets and their role in the mortgage market. He is too much of a gentleman to note that the concerns he raised at Jackson Hole last summer look very prescient.

Update: Russia claims it has no exposure to Fannie or Freddie. If any one knows if there are enough Ginnie Mae and other bonds out there to account for Russia’s known holdings of "Agency bonds," please let me know. The US TIC data doesn’t indicate which "Agency" debt Russia holds -- and given the limits on the portfolio of Russia’s central bank, it wouldn’t surprise me if Russia preferred the bonds of those Agencies with explicit government backing.

Update 2: Russia only claimed that the reserve fund and future fund -- which are managed by the central bank but technically are the resources of the Finance Ministry -- don’t hold Agencies. The Central Bank itself reports holding $100 billion of Agencies in May, including Fannie and Freddie bonds. The US data suggests a higher number -- $155 billion -- at the end of April, but that higher total includes Agency bonds held by private investors and it is possible that Russia reduced its Agency holdings during May. As the graph below shows, it has been reducing its short-term Agency holdings recently.

I produced the data series for long-term Agencies by adding the monthly flows to the stock data in the survey. This risks over-counting Agency holdings, because the monthly flows only capture new purchases, not amortization payments on the existing stock. However, the TIC data consistently undercounts official purchases, so in recent years the survey has constantly revised official Agency holdings up not down. I have assumed that the majority of the Agency holdings of China, Russia, the Gulf and the Asian NICs are held by the central banks. Technically, though, the country data includes both official and private holdings and thus cannot be strictly compared to the official total. In reality, though, the majority of Agency holdings from these countries are from their central banks. 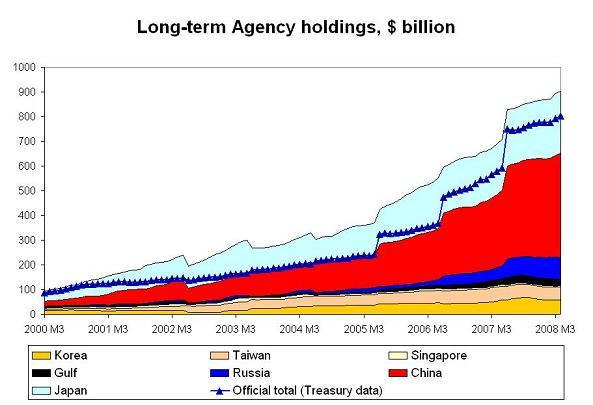 The other large official holder of Agencies is Japan’s Finance Ministry, which has been shifting from Treasuries to Agencies over the past few years. However, there are also large private holders of Agencies in Japan (adding Japan to the country total brings total holdings above official holdings) so I didn’t feel comfortable adding Japan to the country by country breakdown in quite the same way as the other countries.

A plot that shows the securities held by the MoF and the BoJ against Japan’s known US holdings of Treasuries and Agencies strongly suggests both that there are significant private holdings of both sets of assets in Japan and that there has been a reallocation of Japan’s reserve portfolio toward Agencies over the last couple of years. 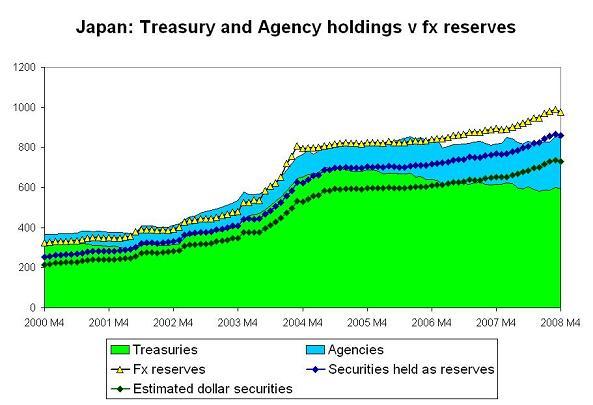 Finally, many central banks do not manage their Agency portfolio "in house" as they prefer not to worry about amortization payments and the like. As a result, even the survey data likely understates true official holdings of Agencies. 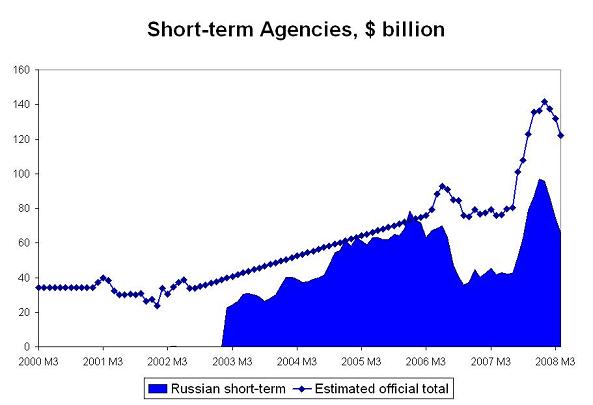 This is clearly an estimate - not a precise total. But often a down and dirty estimate is all that it takes to tell a story. And there is little doubt that Russia is a particularly big player in the short-term Agency market.

Four points on the US May trade data