The trade deficit continued to shrink in February, even though oil prices stopped falling.

Chalk that up to a huge slide in non-oil imports.

Non-oil goods imports were down 25% y/y. Automobile imports are now down over 50% y/y. Imports from Japan were down close to 50% y/y -- a fall that matches the fall in Japan’s exports. Imports from both the eurozone and the pacific rim were down 30% y/y (not seasonally adjusted, and that may be a factor).

Alas, I tend to think the improvement in the February data will be hard to sustain, given the bleak global outlook and the lagged impact of the dollar’s rebound from its 2007/ early 2008 lows. I agree with Joshua Shapiro, who noted that the fundamentals still point to further falls in exports:

“Given what is happening in the rest of the world, it is highly unlikely that the February result represents the start of a turnaround in demand for U.S. goods abroad,” Joshua Shapiro, chief United States economist at MFR, wrote in a note. 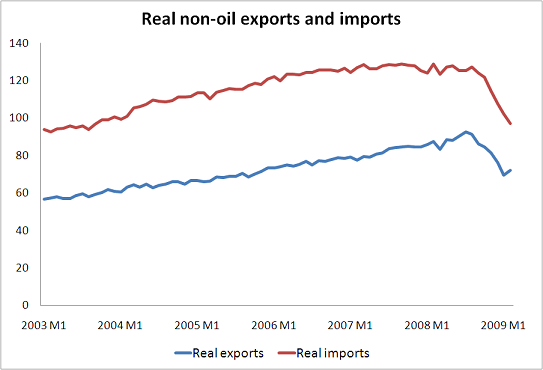 But the main story is that on a y/y basis, both real imports and exports are way down. 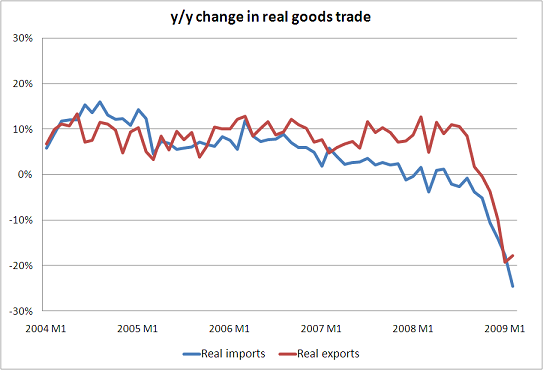 I have a longer time series more readily available showing the change in nominal exports (both goods and services). And the smoothed data (which looks at the y/y change in a three month moving average of non-oil exports and imports to limit the impact of month-to-month noise) shows a large, ongoing slide in both exports and imports. 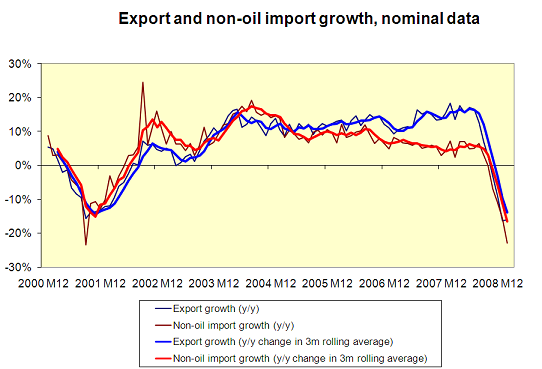 I don’t see any green shoots in the data. Not yet. Exports and imports are both falling at a rapid pace. And -- as Calculated Risks’ charts make clear -- the fall in both exports and imports is far sharper during this recession than during the 2001 recession.

One last point: Average US oil imports in the first two months of the year were around $15 billion a month. That is down almost $20 billion from this time last year. And it is down over $30 billion from the peak of the summer. The fall in oil prices -- more than anything else -- explains the improvement in the trade balance. Moreover, US petrol import volumes are down 6% y/y, even with lower prices. That suggests that American behavior has changed. Or perhaps it just suggests that the fall in economic activity trumped any response to lower prices.

Charting the current US downturn