Take out U.S. exports of manufactures to Canada and Mexico, and the United States manufacturing exports to the world are about 3 percent of U.S. GDP.*

Non-NAFTA manufacturing imports are over 7 percent of U.S. GDP.

These calculations are based on the North American Industry Classification System (NAICS) data for manufacturing trade, but exclude refined petrol. I cannot bring myself to count "product" as a manufacture. The division between the petrol and the non-petrol balance has long been central to my understanding of trade. 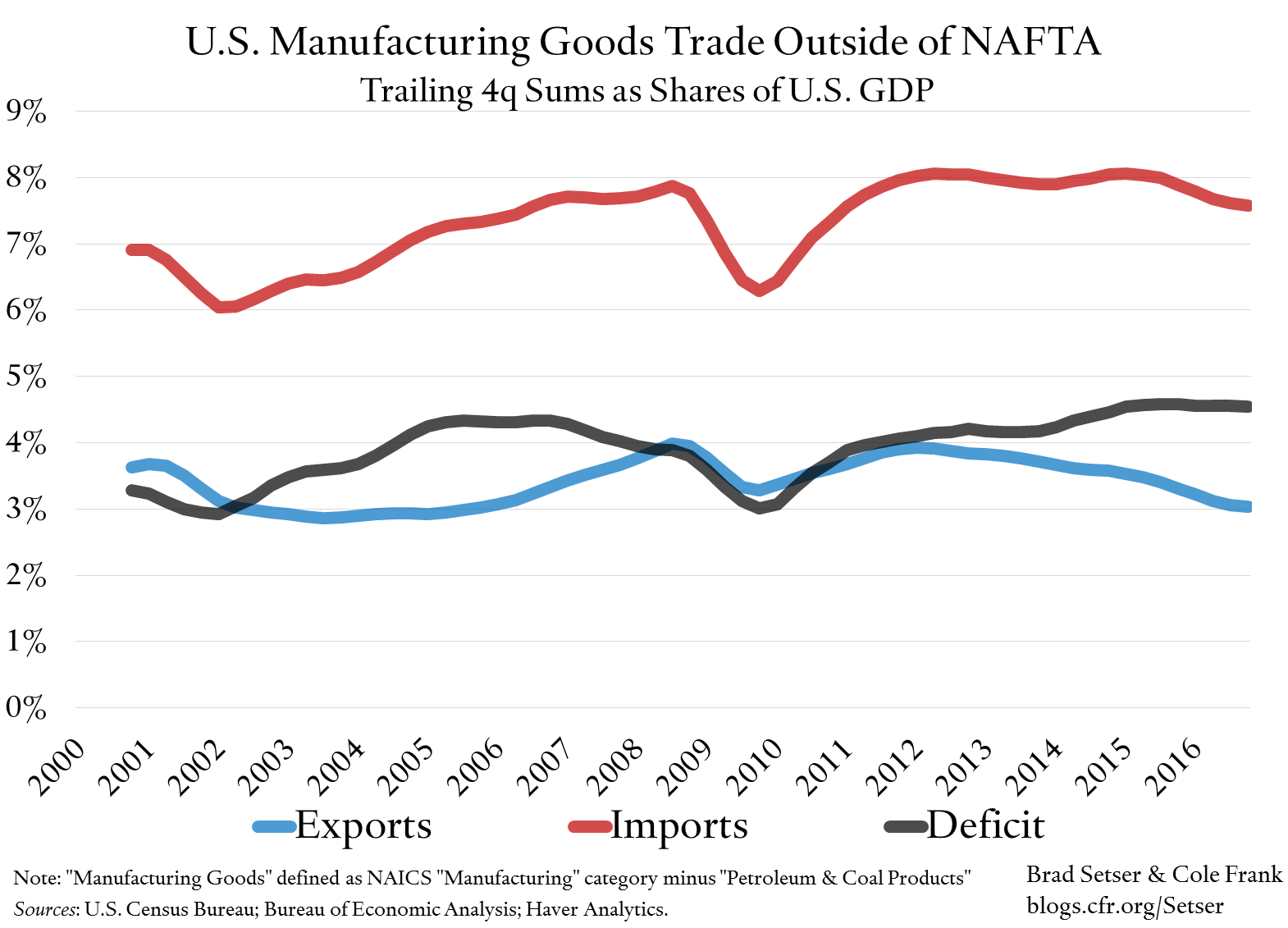 Within NAFTA manufacturing exports and imports are roughly balanced—about 2.5 percent of GDP in both directions.** 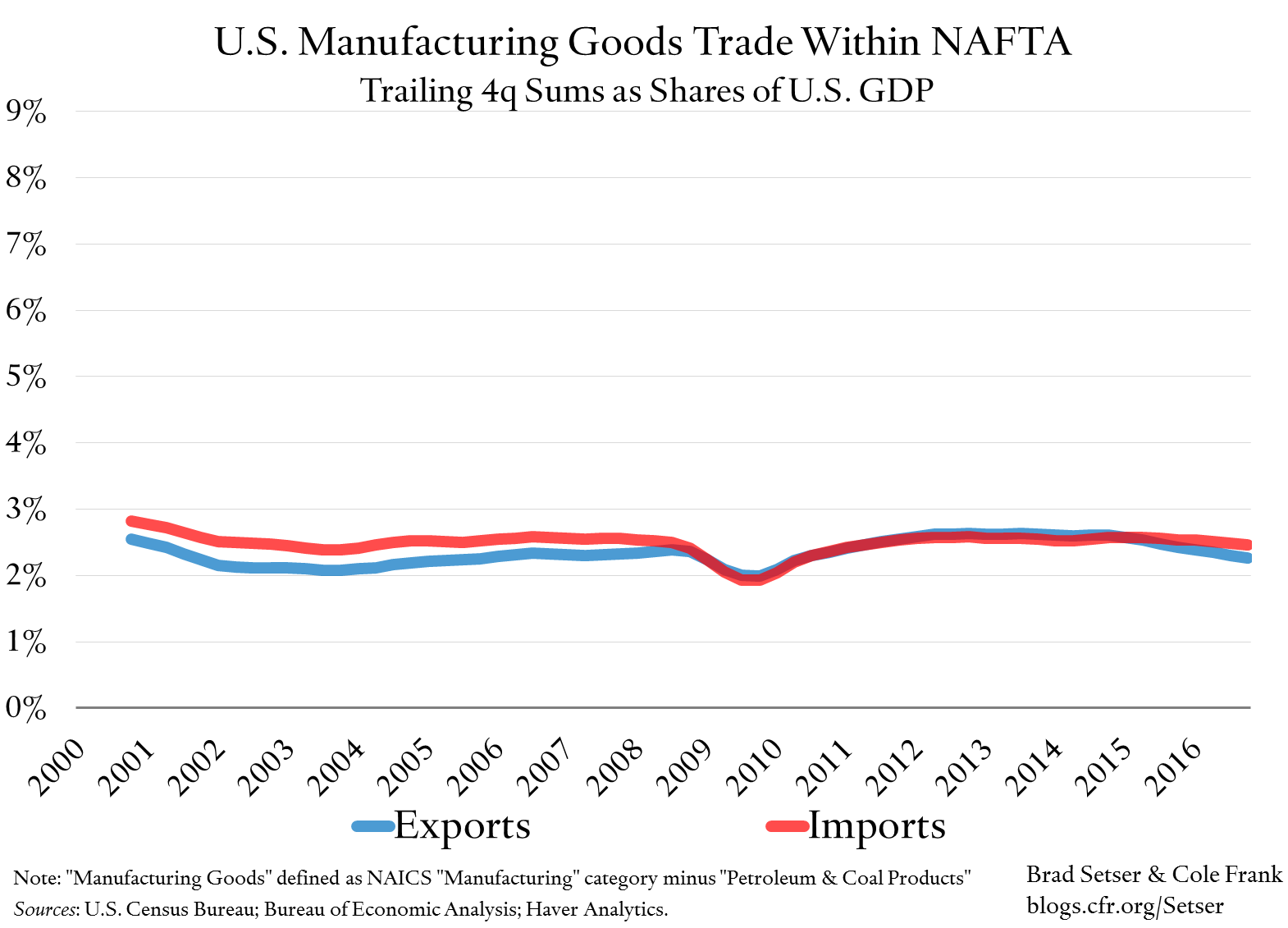 This supports Greg Ip’s view that China’s entry into the WTO—viewing WTO entry as short-hand for China’s increased integration into the global economy—in the 2000s had a materially different impact on the U.S. economy than NAFTA. By all measures, U.S. trade within NAFTA is much more balanced than U.S. trade with the world.* 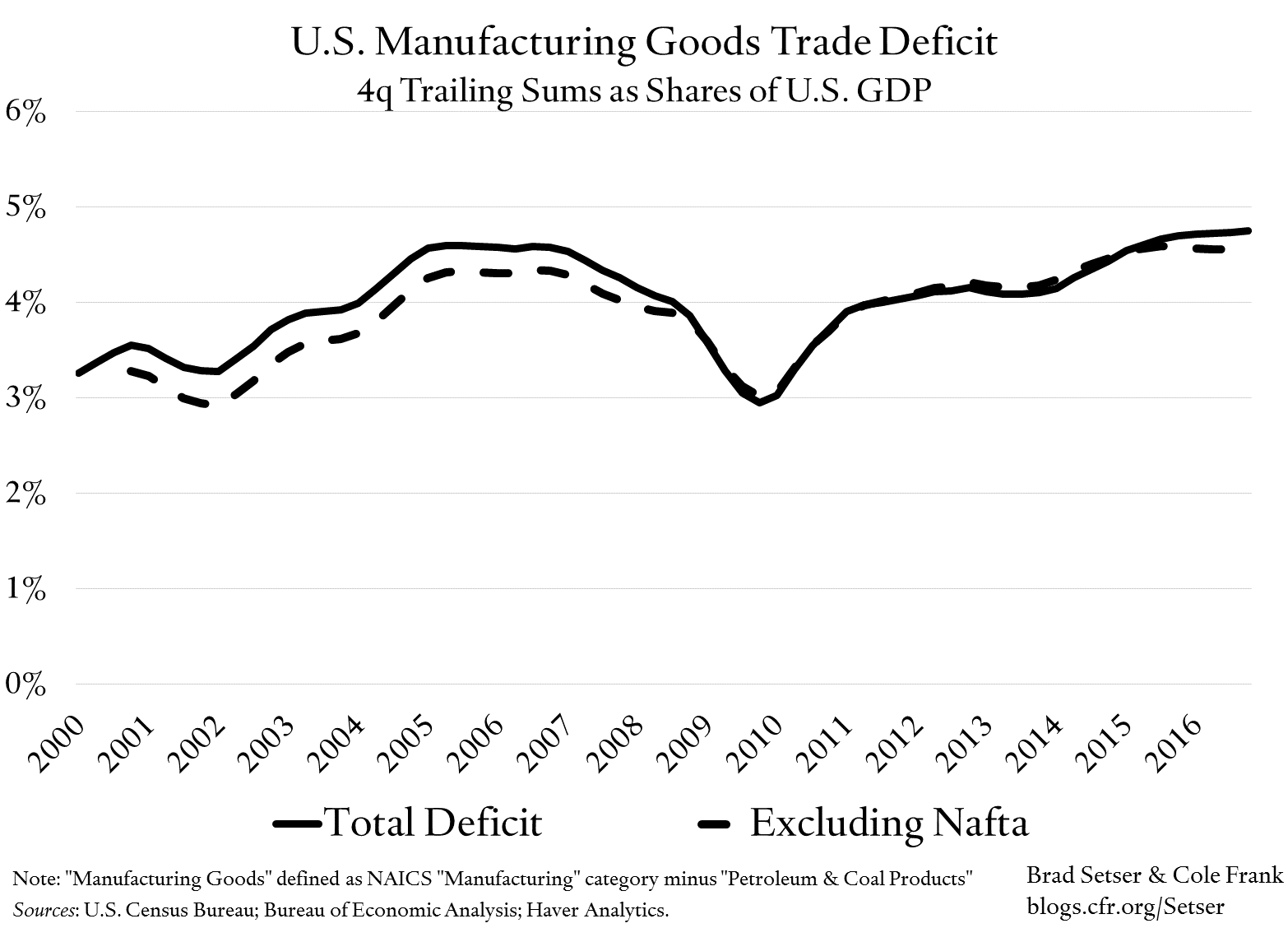 The winners from globalization in the U.S. are not so much those making goods to meet world demand as those selling debt (and real estate) to the world, those whose jobs are insulated from global competition and thus benefit from low-priced imports, and firms that have (often not taxed, or lightly taxed) large offshore profits.

Take out NAFTA, and the number of jobs “gained” by exporting to meet the world’s demand is far smaller than the number of jobs “lost” because U.S. demand for manufacturing is being met by imports. Simple calculations suggest that closing the non-NAFTA manufacturing deficit of over 4 percent of U.S. GDP would support over 3 million more jobs in manufacturing-heavy communities (math is reviewed here, the U.S. government believes a $1 billion in goods exports supports just over 5,000 jobs) . The U.S. manufacturing trade deficit has changed the composition of U.S. employment—though right now, it likely has only a modest impact on the overall level of employment (e.g. an expansion of manufacturing jobs would mean fewer jobs in other sectors, as workers would need to be pulled into the manufacturing sector from other parts of the economy).

Of course, if the U.S. closed the manufacturing deficit, its current account would need to be in (modest) surplus. The petrol side of the ledger—and the commodity side of the ledger generally—is in deficit, but only modestly so. Services generate a surplus of close to 1.5 percent of U.S. GDP. And the income on foreign direct investment covers interest payments on U.S. external debt and transfers to the world, more or less.

But the resulting surplus would be modest on a global scale—somewhere between 1 and 2 percent of U.S. GDP. That is in line with the surplus China now runs, and way smaller than the surpluses of countries like Japan, Korea, the Netherlands and Germany.

The numbers above can be interpreted in a lot of different ways. Trade in manufactures isn’t a huge share of the U.S. economy, so there is a limit to the number of jobs that have been lost from trade. Especially trade inside NAFTA, which is close to balanced.

Chinese exports to the U.S., Canada, Mexico, Latin America, Europe, the Middle East, and Africa are a bit over 10 percent of China’s GDP (down from a pre-crisis peak of around 20 percent of GDP). China of course has to export manufactures to pay for its imports of commodities, while the U.S. doesn’t. But even after taking into consideration the fact that U.S. success at reducing its imports of energy has reduced its need to export goods (or services) to pay for imported oil, the United States doesn’t export much.

And this raises one point where I do disagree slightly with those who argue that U.S. firms ability to source globally (and especially from Mexico) has supported a significant number of “precision” manufacturing jobs in the U.S. (do follow the link to Tim Harford’s piece; I like the distinction he draws between oil, textiles, and precision manufacturing of components)—and thus that globalization hasn’t necessarily eroded the bargaining power of skilled manufacturing workers in the U.S.

Conceptually that is possible—imports of Eastern European parts into Germany for example, have helped support a rise in German final auto exports. Since 2005, German jobs lost in the production of parts have been offset by the growth in other manufacturing jobs. Germany’s surplus in "machinery and transportation equipment has gone from €100 billion in 2000 (about 5 percent of GDP) to almost €250 billion in 2015 (almost 8 percent of GDP)—though German manufacturing has remained competitive because Germany’s skilled workers restrained their wage demands—see Martin Sandbu.

And I wish I could convince myself that it is the case in the U.S. But even with the ability to source components from low-cost countries there just aren’t that many high-end exports of U.S. manufactures (final goods or precision components) to the world right now. Not enough, I suspect, to make up for the pressure created by imports of top-end manufactures. Especially not after the dollar’s 2014 appreciation.

There is, of course, one important manufacturing supply chain in the U.S. that does primarily serve global not domestic demand: civil aviation. The U.S. is a huge net exporter of civil aircraft and civil aircraft engines (total exports of civil aircraft, parts and engines is just under 0.7 percent of U.S. GDP—and the U.S. runs a surplus here of a bit under 0.4 percent of GDP)

And on a more modest scale, the U.S. is an important exporter of large industrial engines and large-scale mining equipment to the world—though this business has taken a hit after commodity prices fell. That also supports skilled manufacturing employment.

But I think there are a lot more non-U.S. supply chains that ultimately rely in part on meeting U.S. (and North American) demand.

The NAFTA automotive supply chain is very real, but the NAFTA supply chain largely serves to meet internal NAFTA demand—not to support the export of North American made autos to the world (60 percent of U.S. auto exports go to Mexico and Canada, see exhibit 18 of the trade data—I suspect that the German transplants account for a large share of the United States’ non-NAFTA auto exports). The U.S. trade deficit in autos is almost three times as big as the U.S. surplus in civil aviation (see the data tables of the December trade release for confirmation).

And of course there is the Asian electronics supply chain that provides much of the world’s telecommunications network infrastructure and most of the world’s consumer electronics. The U.S. deficit in cell phones is roughly equal in size to the U.S. surplus in civil aviation, as is the U.S. deficit in computers and computer accessories. Adding in semiconductors doesn’t change things either—the U.S. runs a small deficit there too.

I have a different interpretation of the “Apple” story than most. There is no question that Apple captures the bulk of the profits (economic rents) from the sale of iPhones and the like. Apple is worth something like $700 billion and has around $200 billion in cash and securities offshore for a reason. And the iPhone includes many U.S. designed components.

But almost all of the precision manufacturing of the iPhone’s components—of the chips and displays and the like—takes place in Asia, as does the final assembly. The New York Times’ reporting on Apple’s supply chain really cannot be beat (Bradsher and Duhigg highlighted the absence of U.S. made components in 2012; and Barboza followed up in 2016). Samsung and the Chinese phone manufacturers equally rely on Asian precision manufacturing for their key components.

Alas, figuring out the policies that could change the incentives that have led to the U.S. deficit in manufacturing isn’t easy. The deficit doesn’t stem directly from conventional trade deals: see the numbers on NAFTA. At the same time I was never convinced that more conventional trade deals would do much to reduce the deficit in manufacturing either: look at the evolution of U.S. Korean trade in manufactures after the U.S.-Korea Free Trade Agreement (KORUS). The dollar matters of course, as do many other things (U.S. tax policy, European fiscal policy, Asian policies that impede household consumption, etc.)

** I am setting aside the debate over the United States’ $200 billion in “reexports.” That might change the balance for NAFTA (critics of the current data argue that manufacturing trade inside NAFTA only appears to balance because of reexports), but it won’t materially change the overall story. See Slate’s Jordan Weissmann for more. I should also note that in recent years the U.S.has tended to run manufacturing surpluses with Canada and manufacturing deficits with Mexico. To some significant degree this is the natural market response to the fact that Canada’s net exports of oil are rising while Mexico’s net exports of oil are falling (Mexican import of product are almost equal to Mexico’s exports of crude).

Bonus graph, for those interested in the financial side of things. U.S. exports of debt to the world (excluding NAFTA partners) relative to the U.S. deficit in manufactures and the U.S. current account (both also excluding NAFTA). Exports of domestic debt are foreign purchases of U.S. Treasuries, Agencies and corporate bonds. The overall number includes U.S. net purchases and sales of foreign bonds. Recently Americans have been bringing money invested in bonds offshore back home, so looking only at foreign purchases understates net bond financing of the U.S. current account deficit. 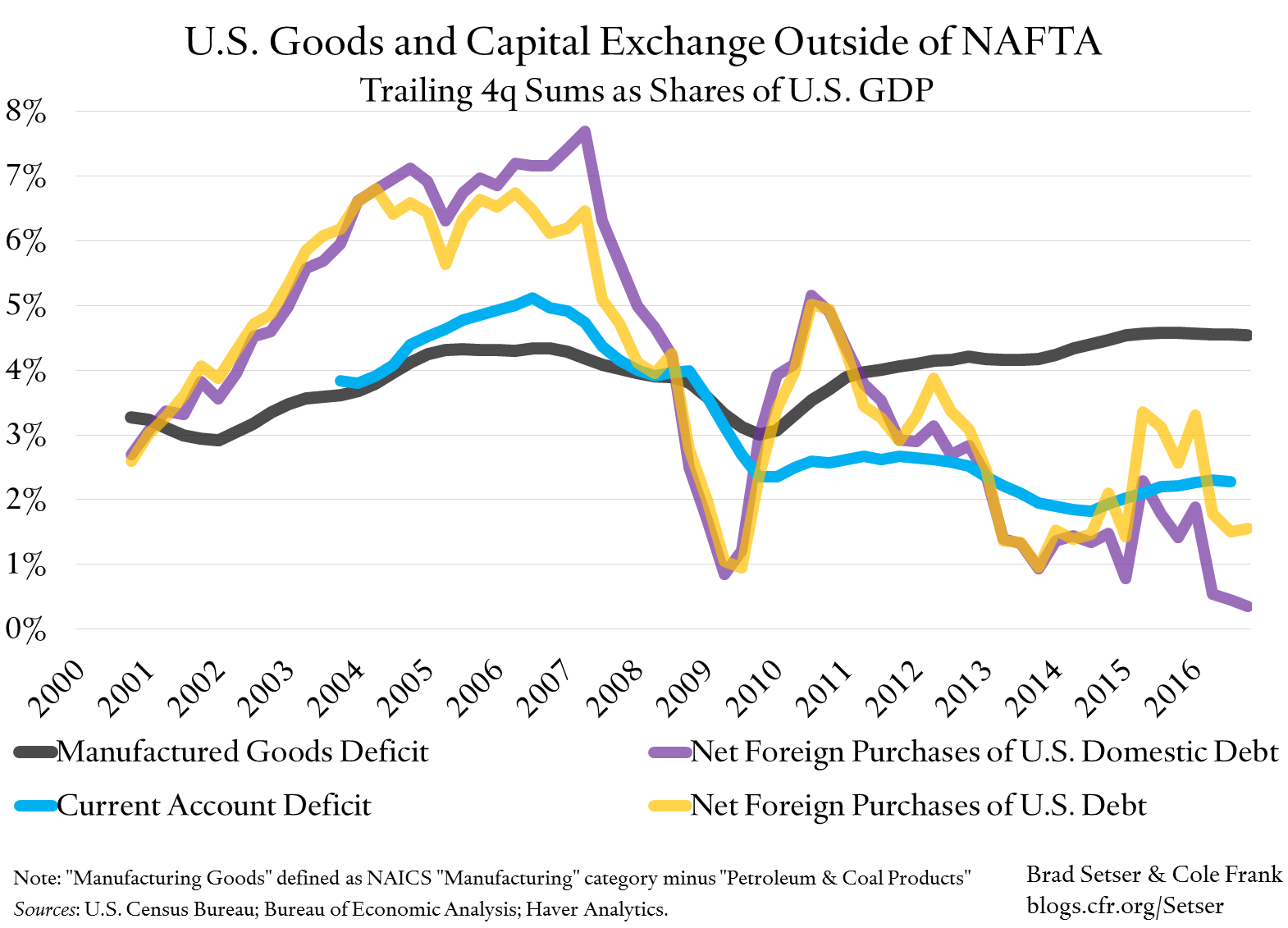