China’s July trade data is now out. Strong export growth (27% y/y) produced a much larger than expected trade surplus. Exports from May through July 2008 are running about 23% above exports from May through July 2007. That is pretty good in my book. The troubles of China’s textile sector simply may not be representative of China’s broader economy. Michael Pettis notes:

the woes of a small but powerful segment of the export industry – low-value-added processors in the south of China, who have been hit primarily by rising wages and a welcome shift in the southern economies towards higher-value-added goods and services – have created a false impression about dire conditions for China’s exporters

Earlier I suggested that it would be hard to argue that Chinese exports were really slowing so long as monthly exports were running $20b a month higher than in 2007. July 2008 exports were $29b above July 2007 exports. That suggests an acceleration in export growth, not a slowdown. But I wouldn’t necessarily read too much into the July data -- there seems to be a lot of unusual seasonality in China’s data this year. Some August exports may have been pulled toward to help minimize congestion around the Olympics. The sharp fall in German export orders and anecdotal evidence that American manufacturers are seeing a fall in European demand do suggest a broader slump in trade is in the cards, and it is hard to believe that China won’t be touched. If Danske Bank is right, real exports already have slowed significantly, with about 10% of the nominal export growth now coming from higher prices. But 15% real export growth is still quite strong. The US would be thrilled with that kind of growth.

But when I look back, I really don’t see strong evidence that China’s export boom has slowed in any meaningful way. Consider a plot showing the rolling 12m sum of exports and imports. The overarching story of this decade continues to be that China has enjoyed one big sustained export boom. 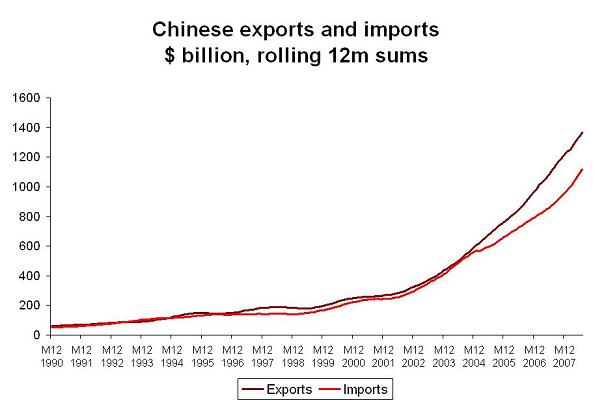 A plot that shows the difference (in billions of dollars) between China’s exports over the last 12 months over a comparable period a year ago (i.e. I subtracted the sum of China’s exports from August 2006 to July 2007 from the sum of China’s exports from August 2008 to July 2007) suggests export growth has leveled off at a high level -- not that it is falling. Imports are up in dollar terms -- as one would expect given the rise in commodity prices. But exports have held up well. The surprise isn’t that higher oil has pulled down China’s trade surplus a bit. The surprise is that China’s trade surplus hasn’t fallen by more in a period when US demand for Chinese goods stalled and oil prices soared. 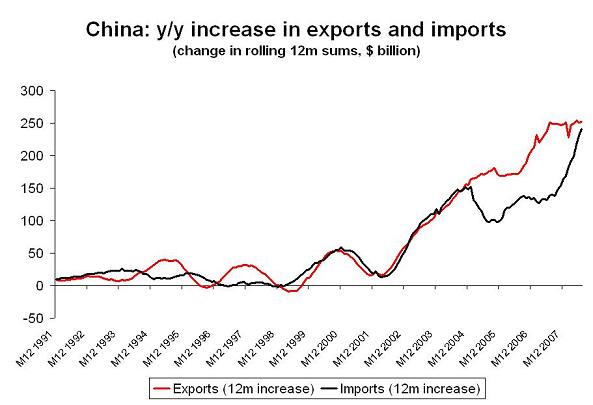 This chart illustrates one other important point. China’s exports historically haven’t always trended straight up. In the 1990s there were pronounced cycles -- and even periods when exports fell. So far this decade has been nothing other than one large boom for China’s export sector. There hasn’t been a real down cycle. More of the dollar increase may be coming from higher dollar prices rather than expanding volumes, but export revenue are still growing at a decent clip.

18 months ago, there was a lot of talk about how the US had vanquished the economic cycle, and entered into a new period with far less macroeconomic volatility. That was a bit too sanguine. And my guess is that at some point, China truly will experience an export slump. I doubt China has vanquished the economic cycle. Rising exports imply more not less exposure to the global economy. And, as David Dollar notes, Chinese exports cannot grow more rapidly than world trade for all that much longer.

But if monthly exports are still up nearly $30b (27%) over the preceding year, well, it hard to argue that the slump has started.