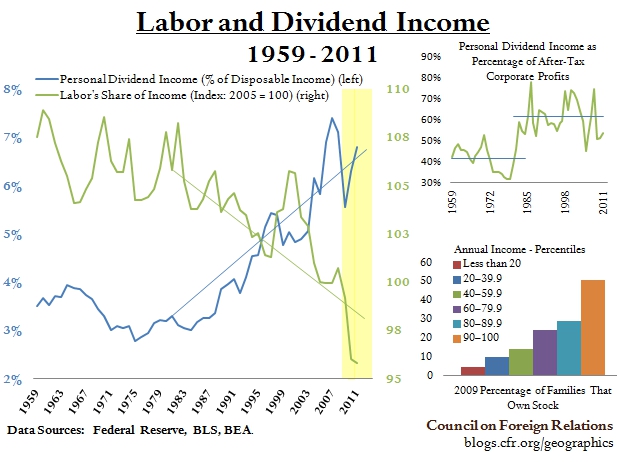 Since 2009, labor’s share of income in the United States has plummeted while personal dividend income as a percentage of disposable income has soared. This is not surprising for the early stage of a recovery in which firms are earning more with less and the stock market has been buoyant. The divergent trends between the two over the last 30 years, however, is notable and important. The small upper-right figure shows that dividend income as a percentage of after-tax corporate profits leapt markedly and permanently in the early 1980s. This corresponds with a general upward trend in corporate profits as a percentage of gross domestic product since that time; a time in which labor’s share of income has fallen almost continuously. Dividend income, not surprisingly, accrues largely to the stock-owning wealthy, as the small bottom-right figure shows. The fuller picture is one of growing inequality; one for which the globalization of business is frequently fingered as a primary culprit. But globalization itself makes the data difficult to parse. When an American firm uses components provided by foreign firms they appear from the data to have no labor content.

Mallaby: Inequality May Lead To Rage Against the Machines

Cleveland Fed: Behind the Decline in Labor's Share of Income

Reimagining China-Brazil Relations Under the BRI: The Climate Imperative