Skip to main content
Is Ukraine on a Long Road to Rupture?

In retrospect, the international compromise reached last week to calm tensions in eastern Ukraine seems like a vehicle for both sides to pursue their broader objectives, says CFR’s Stephen Sestanovich. For Russia, he says the Geneva agreement allowed political conditions in Ukraine to deteriorate, and highlighted Kiev’s weakness in the east. For the United States, it demonstrated Moscow’s bad faith and set the table for further sanctions. Sestanovich says the Kremlin is likely waiting to see how far things in Ukraine disintegrate from within before making its next moves. "It may be that this is a process of separatism that can go on for a couple of years," he says. 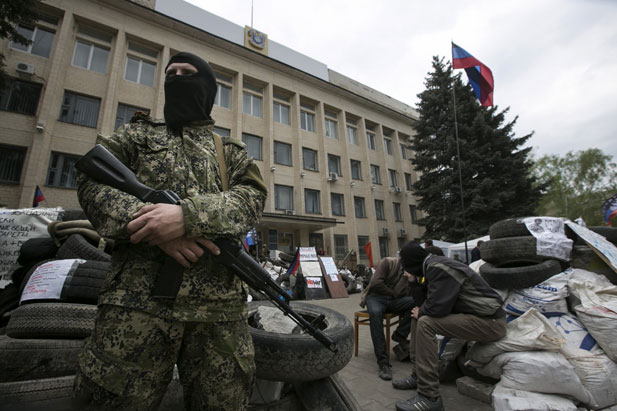 The United States, Russia, Ukraine, and the EU worked out an interim political deal last week, but things seem to have deteriorated. And prior to that, [Russian] President Putin held a press conference where he seemed to be a little bit more belligerent. So what’s going on?

Well the Geneva agreement was a list of useful steps for the de-escalation of the very tense situation in Ukraine, but it had no provision for enforcement or implementation. There was a lot of passive voice in all of the formulations, and since then there have been a lot of spats over details, with the Russians saying, for example, that by "clearing out public spaces," they meant the demonstrators in Kiev still on the Maidan (central square).

It looks as though, in retrospect, that the agreement was a kind of instrument for each side to advance its broader policies. For the Russians, it bought a little bit of time, allowed the situation to deteriorate further, and further prove that the Ukrainian government is powerless to affect events in the east. For the United Statesit was a kind of demonstration of Russian bad faith. It showed that while the Russians were prepared to sit at the table and talk the talk, they weren’t willing to follow up in any meaningful way. The result is that there are now more Russians in eastern Ukraine and a widening paralysis of national institutions there; on the American side, there is new momentum for broader sanctions, a kind of firming up of a new policy toward Russia.

And what is [U.S. vice president Joe] Biden doing in Kiev?

He is meeting today with senior figures of the new government in Kiev to talk about their economic program and its implementation, and to talk even more about their political strategy. The new government wants to engage in a national dialogue about political reform. They don’t actually have a problem with the issue of decentralized power, but they are of course unsure that what they have in mind will still satisfy the more extreme elements that are beginning to set the pace of events in eastern Ukraine.

In his last press conference, which lasted four hours, Putin kept talking about Novorossiya, an old czarist term for territory that is now part of eastern Ukraine. Does he envision incorporating that? What is his motive here?

Putting this term on the table is a pretty far-reaching step. In the modern political parlance of Europe, nobody claims that borders should be based on what they were in the eighteenth century, much less the legitimacy of imperial conquest by distant emperors. To do that is really to throw modern borders into doubt.

We did have the Helsinki Final Act (1975), in which all the states of Europe recognized their borders, and we did have a post-Cold War recognition of borders by all states that acknowledged there was no other real formula for stable relations.

So Putin is taking his own nationalist rhetoric pretty far. People, including myself, have said that it would be really hard to imagine how Transnistria could be incorporated into the Russian Federation because it’s so far away. But of course it’s not far away at all, if Putin aspires to take the whole of southern and eastern Ukraine. Then it’s just the last little tidbit of a new campaign. The question of course is: Does he aspire to do that, or is he just scaring the hell out of the Ukrainian government?

That’s a good question. Does he care anymore about his relations with the United States? I can’t get an impression from his rhetoric. He doesn’t seem to.

I think you’re right. He did make this grudging acknowledgement when pressed during his call-in show that if he and [U.S. president Barack] Obama were swimming together, he was confident that Obama would save him from drowning. But other than that, the relations between the two seem pretty poor.

One can only imagine what the tone of these regular phone calls is. He has made it pretty clear that he is prepared to tell some pretty big whoppers to the president of the United States. He is pretty disdainful of U.S. and European sanctions that have been imposed as a result of the Crimean annexation, and he expresses a kind of confidence that, on other issues where the United States has an interest, it’ll get back to business as usual eventually.

It’s hard to know what he thinks the extent of the damage will be and whether he thinks the United States will find itself opposing Russia alone or strengthen its solidarity with its European allies. I tend to think the latter—that a more cohesive U.S. and European policy is taking shape.

The EU has been sort of hedging its bets, hasn’t it?

But the media report that, in its lumbering, hesitant way, the EU is getting closer toward a consensus on new sanctions. And apparently the same is true of the United States. I think the chances are [good] that another round of sanctions is likely to be better coordinated between Europe and the United States.

What are the prospects that Russia will bite off eastern Ukraine?

Well, the image people have had of this process has been a little over-militarized. We have imagined tank formations rolling across the border into the big cities of eastern Ukraine as though it were the last days of World War II. But it’s clear that the Russian game plan is a little different—it’s to see how far the disintegration from within those provinces can go, and then to choose their next steps accordingly. And that process is continuing.

You have new calls in daily from political groupings, formal and informal, in the major cities, calling for federalizations or for new legislation on languages. Every couple of days, you’ve got a new episode of violence in which a few people are killed, and inter-communal tensions rise with those incidences. We’re not yet at a situation like what you had in the Balkans in the 1990s, but we’re beginning to get closer to that.

It may be that a better analogy is the process of separatism that occurred in other countries of the former Soviet Union immediately after the breakup—the creation of separatist authorities in Abkhazia and South Ossetia in Georgia, in Nagorno Karabakh in Azerbaijan, in Transnistria in Moldova. It may be that this is a process of separatism that can go on for a couple of years. You might have a territory in the east and south of Ukraine that would be essentially ungoverned by Kiev.

Now the thing about the other cases that we have come to call frozen conflict is that they were relatively stable. They didn’t infect the stability of the rest of the country of which they were a part. In this case, I think the destabilizing impact on the whole of Ukraine would be pretty great, and the fact is that Putin’s Novorossiya slogan suggests it could extend to an entire swath of the country.

Yes, because cities like Kharkiv are big industrial cities?

Yeah. There was an interesting analysis of this in [Radio Free Europe/Radio Liberty] a couple of days ago, in which they looked at the political elites in Lugansk and Kharkiv. The report said that the political and economic elites in those cities are finding the separatist gangs and the Russian presence somewhat useful because they protect against a Kiev government that is eager to assert its authority. It gives them a way of balancing against different pressures, both from Russia and from Kiev. And that may introduce a new disintegrative dynamic in these provinces.

We’ve tended to assume that the political and business elite were against Russian control, but now it may be that those elites are using these Russian groups to kind of hold on. We haven’t seen this play out fully, but the big-business men who were thought to be in favor of staying part of Ukraine may be recalculating. And that too could begin to weaken national unity.

The polls have tended to show Petro Poroshenko, the so-called "Chocolate King," in the lead. He was an important figure in the Orange Revolution. Yulia Tymoshenko is a more divisive figure whose main asset in the minds of many is that she might be able to deal effectively with the Russians. She is thought to have Putin’s respect. She has cut deals with the Russians in the past, but her credibility in most of Ukraine is low.

She is, by the way, from the east, and is a Russian speaker whose Ukrainian is thought not to be particularly good despite her golden braids. But she has not polled well. And apart from this asset—being able to deal with the Russians—she doesn’t seem to have a lot of popular support.