Delhi voters just elected—by a landslide—the Aam Aadmi Party (AAP) to lead their state assembly. What’s more, the chief minister will again be quirkily charismatic Arvind Kejriwal, who led the new anti-corruption party to a strong showing in Delhi in December 2013 but abandoned governance for street sit-ins and staged public protests. He then quit government after forty-nine days and plunged the state into a long period of uncertainty. Despite this, wielding brooms and wrapping a scarf (“muffler” in India, hence his nickname “Mufflerman”) around his head during winter, Kejriwal campaigned aggressively to root out corruption and provide free water, half-rate electricity, and a better jobs deal for the poor. It worked.

Once the final results were counted, AAP received a near-total victory with sixty-seven out of seventy assembly seats. The Bharatiya Janata Party (BJP) received three seats. The Indian National Congress, which led Delhi for three terms prior to 2013, suffered a 100 percent rout, losing every single seat. This result will likely lead to internal soul-searching within the BJP, which swept all seven seats from Delhi in last year’s parliamentary election, and had appeared to be leading a political juggernaut across Indian states. It also continues the diminution of the once-nationally dominant Congress party, a collapse that has worsened in the last two years. It is not, however, likely to have an immediate impact on India’s foreign and international economic policy issues. 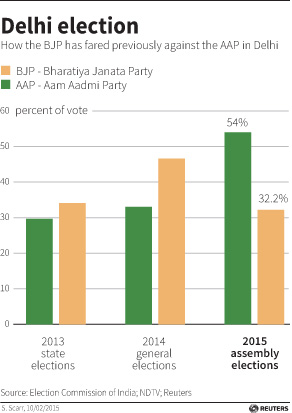 That’s because Kejriwal’s AAP already took the broom to foreign investment in retail last time around—so no longer an issue—and the rest of their campaign focused on domestic issues of infrastructure and governance which will have little connection to the world outside Delhi. In addition, as some observers have noted, many of AAP’s economic election promises, like seven hundred liters of free water for every household, will be difficult to implement, because they will require support from surrounding states. Delhi’s government will soon confront the practical implication of promising half-price electricity and a substantial upgrade in services against budget realities.

The main impact of the Delhi results on the national level will be felt in the BJP’s response. And that may be very limited on the questions concerning foreign and international economic policy. Since the BJP has also made governance and anti-corruption a strong focus of their national platform, they differ little from AAP on that count. It’s the area of economic reforms that bear watching. Reforms and increasing India’s international competitiveness are a core part of the Indian government’s pitch around the world. A lesson of the AAP landslide appears to be the continued appeal of populism—but I’d venture that the Modi team will see little reason to change course on the economic front on the basis of one state, especially when their reform docket still looks full, and the work of improving India’s competitiveness has only just started.

Of course, it’s also possible to look closely at the Delhi results in terms less related to Modi’s reforms and more on their campaign and selection of a chief ministerial candidate. They chose Kejriwal’s onetime anti-corruption pal-turned-rival Kiran Bedi, put up at the last minute and apparently uninterested in speaking with reporters trying to cover her. (She lost her own race for an assembly seat.) It’s also possible to see in the elections a repudiation of some of the religious nationalism exhortations that became louder from some of Modi’s supporters during the end of 2014. How the party interprets those results will matter for how it decides to handle the voices from the Vishwa Hindu Parishad and others, important for overall legislative management especially in the upper house of parliament which has increasingly focused on these questions leading to parliamentary gridlock.

So are there any clear implications of the Delhi outcome for how India will approach the international aspects of its budget, due at the end of the month, or how it will consider its role in the world?  From this vantage point, not yet. But there will be if the next state-level election (Bihar) produces a similar result, and decisively ruptures the BJP national momentum.

Tony Abbott Lives for Another Day – Now What?

A Review of “How China Loses: The Pushback Against Chinese Global Ambitions”