Above the Fold. Tuareg rebel fighters in northern Mali today declared the independent country of Azawad. The announcement comes on the heels of the rebels’ rapid success in driving government forces out of Northern Mali in the two weeks since Malian soldiers overthrew the country’s democratically elected president, Amadou Touré, a former general who first came to power in a coup two decades ago. (Touré oversaw Mali’s transition to democracy and then stepped down from power, earning him the nickname "the soldier of democracy.” He was elected president in 2002 and again in 2007.) The new ruling junta justified its coup on the grounds that Touré had failed to put down the Tuareg rebellion. Tuaregs, a semi-nomadic people spread across Niger, Mali, Libya, Algeria, and Burkina Faso, make up an estimated 10 percent of Mali’s population. They have been fighting for their independence since even before Mali won its own independence from France in 1960.

So far Azawad, which would cover an area larger than France but have a population of only about a million people, is not being greeted warmly by the international community. The U.S. State Department rejected the independence bid and called for maintaining “the territorial integrity of Mali." France’s defense minister said that a declaration of independence that “is not recognized by African states would not have any meaning for us.” That recognition does not look to be forthcoming. Algeria says it “will never accept questioning the territorial integrity of Mali.” African countries more generally have long resisted efforts to redraw borders on the continent, fearing that it would only encourage more secession movements. (The peaceful breakup of Sudan into two sovereign countries was unique in this regard.)

But the United States and France helped produce, albeit unintentionally, the current state of affairs in Mali. The Tuaregs, who are fighting under the banner of the National Movement for the Liberation of Azawad (MNLA), gained the upper hand in their battles against the Malian government only after the ouster of Muammar Qaddafi flooded the country with weapons. Now Washington and Paris worry that the MNLA’s success has strengthened its ally, Ansar Dine, an Islamist faction with ties to the North African branch of al-Qaeda. Ansar Dine has taken control of Timbuktu and vowed to impose sharia law. (UNESCO worries that the fighting poses a danger to the World Heritage Site of Timbuktu.) Oddly enough, Ansar Dine agrees with Washington and Paris on one thing: it too opposes creating a separate country of Azawad.

Looming in the background is the potential for a famine in Mali. Irregular rainfall has stunted harvests in Mali and elsewhere across the Sahel. Making matters worse, the fighting in Mali has already displaced some 200,000 people in the north; people who are fleeing their villages can’t tend to their crops. All this is putting pressure on the United States and other countries to increase their aid to Mali, but that might have the perverse effect of rewarding Mali’s ruling junta. Meanwhile, questions abound about the junta’s ability to beat back the MNLA and Ansar Dine. Prolonged fighting could do just as much to precipitate a famine as low rainfall. So stay tuned. Things could get a lot worse.

CFR Event of the Week. Whether you prefer “the Arab Spring,” “the Arab Awakening,” “the Arab Uprisings,” or some other label, the political upheavals that have rocked the Arab world ever since Tunisian fruit seller Mohamed Bouazizi set himself ablaze back in December 2010 have changed the face of the region. To make sense of what has been happening in the Arab world and what it means for everyone else, CFR, in partnership with the Middle East Centre at the University of Oxford’s St. Antony’s College, held a symposium with the generous support of the Hauser Foundation on the “Implications of the Arab Uprisings.” The panels covered a wide range of issues, including the future of Arab monarchies, Islam and politics, the geopolitics of the changing Middle East, and possible steps the United States and Europe could take in response. I had the honor of moderating the symposium’s first panel on the prospects for democracy in the region with my CFR colleague, Elliott Abrams, and the head of St. Antony’s Middle East Centre, Michael Willis. What I learned is that there are great variations within the Arab world in terms of the depth of the democratization process.

Read of the Week. Rep. Paul Ryan (R-Wisc.), chair of the House Budget Committee, got himself into hot water last week when he told the National Journal’s Live Budget Policy summit, "We don’t believe the generals are giving us their true budget.” Not surprisingly, the generals didn’t like the suggestion that they are being dishonest with their budget numbers. Ryan subsequently walked back his comments, saying that “I really misspoke.” He went on to explain: “What I was attempting to say is, President Obama put out his budget number for the Pentagon first, $500 billion cut, and then they began the strategy review to conform the budget to meet that number.” As Slate’s Fred Kaplan, one of the best journalists covering the defense beat points out, Paul’s defense of his misstatement showed a surprising lack of understanding about how defense budgets get made.

Blog Post of the Week. Several U.S. states have moved in recent years to impose more restrictive immigration laws, potentially upstaging federal law and precipitating numerous lawsuits. While these legal challenges work their way through the legal system, researchers have begun to explore the laws’ economic impact. Shannon O’Neil reviews several recent studies and concludes that “while the motivations behind many of these laws may be to improve the economic prospects for U.S. citizens, the early results show instead the opposite–increased costs for natives and non-natives alike.”

Poll Question of the Week. Egypt’s Muslim Brotherhood has gotten some flak for reneging on a promise not to nominate a candidate in next month’s presidential election. But once you look at the polls it’s easy to see why the Brotherhood did an about face: it’s what the public wants. The Al-Ahram Centre for Political and Strategic Studies released a poll this week showing that nearly six in ten Egyptians favor an Islamist for president. The iron law of democratic politics is at play here: politicians gravitate to where the public wants to go.

Chart of the Week. Growing income inequality in the United States has attracted a lot of comment. But figures from the Organisation for Economic Co-operation and Development (OECD) show that greater income inequality is not a U.S.-only phenomenon. Income inequality is up across rich countries. Economists use something called the Gini coefficient to measure inequality. It is a scale that runs from zero to one, with zero indicating total equality (everyone makes the same amount) and one indicating total inequality (that is, one person gets all the income and everyone else gets nothing). As the chart below shows, the Gini coefficient rose over the last quarter century in seventeen OECD countries. What may be most remarkable about the numbers is that income inequality was up not just in traditionally higher income-inequality countries such as Mexico, the United States, and Israel, but also in traditionally lower income-inequality countries such as Germany, Finland, and Sweden. The fact that income inequality is up almost across the board might seem to suggest that globalization and technology are to blame rather than the specific tax, spending, and regulatory choices that individual countries make. After all, globalization and technology are universal in their impact while countries follow very different national economic policies. The OECD’s economists, however, say that the jury is still out on the causes of greater income inequality. Which brings to mind something I read once to the effect that if you lay all the world’s economists end to end you will never reach a conclusion. So let the argument continue. 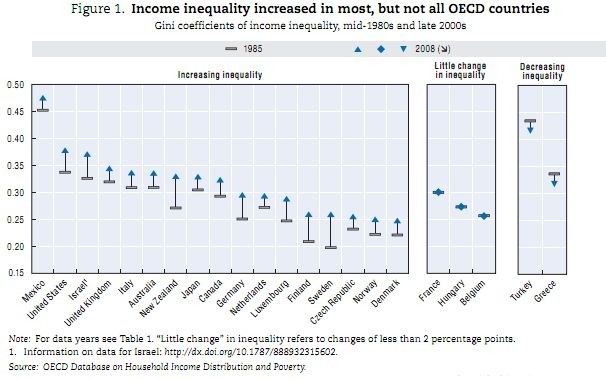 Source: OECD via The Atlantic

Too Good Not to Note. John Campbell asks where South Africa is going. Isobel Coleman reviews the latest OECD numbers on net official development assistance—foreign aid to you and me—and finds that they have fallen. Adam Segal wonders what China’s technology policy can tell us about its cyber policy. Micah Zenko thinks we are likely to see fewer U.S. drone strikes in the future. Salon’s Jordan Michael Smith notes that the memo that Philip Zelikow, counselor to former Secretary of State Condoleezza Rice, wrote criticizing the Bush administration’s “enhanced interrogation techniques” has been declassified and is available for reading. Nobel-Prize-winning economist Joseph Stiglitz doesn’t think that the United States should get to pick the president of the World Bank. Terra Lawson-Remer thinks that Dr. Jim Yong Kim would make a fine World Bank president. Jagdish Bhagwati disagrees; he favors Nigerian finance minister Ngozi Okonjo-Iweala. John Zogby explains why pollsters ask so few questions about foreign policy. Jack Goldsmith is disappointed with almost everyone involved in the flap over President Obama’s remarks about the Supreme Court potentially overturning his health-care law. (Professor Goldsmith has a new book out called Power and Constraint: The Accountable Presidency After 9/11 that I look forward to reading. He discussed it this week on The Daily Show. Interesting stuff.) In an effort to get a head start on the GOP vice presidential sweepstakes, Uri Friedman examines Paul Ryan’s foreign policy views.

Perils of Prediction. “We doubt younger boys will be that excited by the main character.” Richard Greenfield of Pali Research in March 2009 on the movie UP in explaining his decision to downgrade shares of Disney, the company that produced the movie. Either every other demographic category really liked UP, or parents forced their “younger boys” to watch it, or Mr. Greenfield was flat out wrong. Because UP grossed $731,342,744 worldwide. May your next screenplay fare as well.

Quote to Ponder. “Never argue with a fool, onlookers may not be able to tell the difference.” Attributed to Mark Twain, though I can’t find evidence he actually wrote it or said it.

A Reason to Smile. Major League Baseball is back, and with it, dreams of the World Series.