China is a powerful international actor as the world’s most populous country and its second-largest economy. The country also invests significantly in modernizing its military. With signs that the United States will retreat from a leadership role under the Trump administration, China has positioned itself as a champion of globalization and economic integration, perhaps signaling a desire to step in as a greater international leader. It is doing this by doubling down on soft power, a measure of a country’s international attractiveness and its ability to influence other countries and publics.

But what exactly are China’s means of exerting influence? In the last decade, the Chinese government has committed to boosting its appeal abroad. Beijing has been developing an international media network and establishing cultural study centers around the world. While debate abounds over whether promoting China’s traditions, values, language, and culture can win it more friends, vast funds are backing programs to enhance the country’s image. Despite its efforts, China has yet to see a significant return on its investment.

When did China start investing in soft power?

Chinese officials and academics expressed the importance of China’s culture in the 1990s and early 2000s, but soft power was explicitly referenced in national government policy for the first time at the Seventeenth National Congress of the Chinese Communist Party in 2007. Former Chinese President Hu Jintao said, “The great rejuvenation of the Chinese nation will definitely be accompanied by the thriving of Chinese culture.” This formulation, tying culture to the country’s place on the world’s stage, echoed other core principles from Chinese leadership, such as China’s “peaceful rise” and its vision of a “harmonious society.” These ideas intended to counter narratives from the West that China’s emergence was a threat to the existing international order.

Hu’s successor, Xi Jinping, said in 2014, “We should increase China’s soft power, give a good Chinese narrative, and better communicate China’s message to the world,” calling for a stronger national effort to link China’s popularity and likeability to its meteoric rise. Soft power, a term coined by Harvard University scholar Joseph S. Nye Jr. in 1990, is the means by which a country gets other countries to “want what it wants.” Nye emphasized that a country’s perceived legitimacy, attractiveness of ideology and culture, and societal norms play an important role in shaping international politics. Under Xi’s leadership, China has pushed the notions of the “Chinese Dream” and “China Model” without providing clear definitions.

The funds China steers toward its soft power campaign are hard to pinpoint due to the country’s limited transparency but experts place estimates in the billions of dollars. U.S. sinologist David Shambaugh of George Washington University says that China spends approximately $10 billion a year.

What are its soft power tools?

China is attempting to export its approach to development, which has lifted hundreds of millions of its people out of poverty. The Belt and Road Initiative, or BRI, described by leaders as a vehicle for soft power, calls for spurring regional connectivity. It seeks to bring together the Silk Road Economic Belt and the Maritime Silk Road through a vast network of railways, roads, pipelines, ports, and telecommunications infrastructure that will promote economic integration from China, through Asia, the Middle East, and Africa, to Europe and beyond. To finance a share of these international projects, China contributed $50 billion [PDF] to the Asian Infrastructure Investment Bank upon its founding, half of the bank’s initial capital. Beijing also pledged $40 billion for its Silk Road Fund, $25 billion for the Maritime Silk Road, and another $41 billion to the New Development Bank (established by BRICS states: Brazil, Russia, India, China, and South Africa). 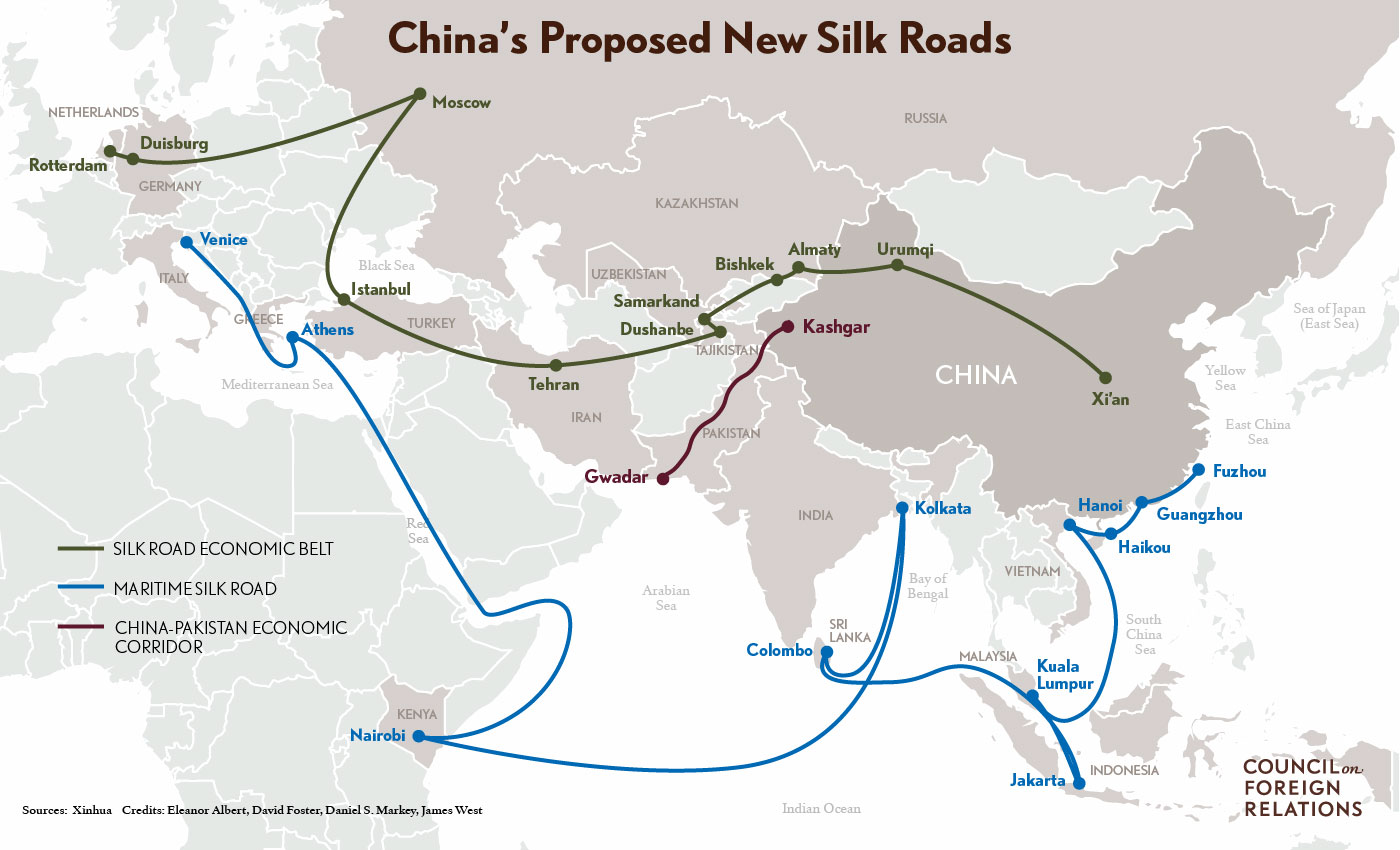 Separately, Beijing has also implemented aid programs that do not conform to international development assistance standards: its aid typically focuses on South-South partnerships in the developing world; comes without conditionality; is predominantly bilateral; and includes not only grants and interest-free and concessional loans, but also other forms of official government funding. A number of training programs have supported public health, agriculture, and governance. Chinese aid programs, though growing, are a fraction of what large donors like the United States, European Union institutions, and Japan offer.

Chinese athletic performances are a projection of power as well. Hosting the 2008 Olympic Games in Beijing put the country on display. China took home seventy-one medals at the 2016 summer Olympics in Rio de Janeiro compared to thirty-two in the 1984 Los Angeles games.

In addition, Chinese firms have courted Hollywood’s film industry, though there are signs of this interest cooling off. Dalian Wanda, one of the world’s largest media companies, closed a series of deals in 2016 with U.S. film studios and cinema chains, including a partnership with Sony Pictures and the acquisition of Legendary Entertainment, the production house behind hits like “Godzilla,” “Jurassic World,” and “Interstellar.” U.S. studios look to China for much-needed investment and an entry into China’s desirable movie market. By the end of 2017, a handful of deals between Chinese firms and Hollywood studios have been scrapped—a trend that experts say indicates China may slow its investments in the American film industry. Still, Chinese firms are seizing on the opportunity to have a more direct hand in shaping China’s external image and U.S. producers have grown wary of making films that cast China in a negative light, primarily out of a desire to tap into Chinese distribution markets. Though China’s film industry may be internationalizing and diversifying, Chinese films still have limited distribution and box office success in external markets, raising questions about the broad appeal of such cultural products.

Is its soft power effective?

Soft power by nature is difficult to measure. In the case of the ambitious BRI, China’s neighbors and partners have so far responded by taking a cautious approach [PDF]. Many business and government leaders view BRI as an economic opportunity to stimulate growth across Asia and beyond; the continent’s infrastructure needs are expected to exceed $1.5 trillion a year to sustain development through 2030, according to a 2017 Asian Development Bank report. Economic wellbeing is a powerful incentive for countries desperate for development, but Chinese financing and construction does not translate directly into Beijing’s ability to exert influence in recipient countries. For example, local communities in South and Southeast Asian countries like Myanmar and Sri Lanka have expressed resentment toward China’s growing presence; even in Pakistan where the China-Pakistan Economic Corridor has been broadly endorsed, some lawmakers fear that such projects may jeopardize national interests. In spite of the risks, regional actors are often induced by short-term economic benefits needed to fuel growth, though they remain guarded about bending to Beijing’s strategic preferences.

While there are few quantifiable metrics to gauge influence, experts often refer to public opinion polls that assess global perceptions of China. By these benchmarks, China’s efforts seem to have had little effect in boosting its favorability.

Respondents answered whether they held a favorable or unfavorable view of China. Pew Research Center

In Africa, opinion poll respondents typically hold more favorable views of China than in other parts of the world, according to surveys conducted by Pew Research Center and Afrobarometer [PDF], a Pan-African research network. Countries like Burkina Faso, Ethiopia, Ghana, Liberia, Mali, and Niger have some of the highest views of China’s influence, often ranging above 75 percent. In Latin and South American nations, the majority of respondents often view China favorably, but the margins are less substantial. For example, Chile and Peru held positive views with 66 percent and 60 percent of respondents seeing China favorably in 2015, while Argentine and Mexican respondents stood at 53 percent and 47 percent, respectively.

Countries that have held highly positive views of China over time include Pakistan and Russia. Other neighbors hold more varied perceptions. On average, 64 percent of Indonesian respondents viewed China favorably between 2005 and 2015. Over the same period, opinions of China in Japan dropped significantly. In western democratic countries like Germany and the United States, a clear trend has emerged: despite the government’s efforts, favorable opinions of China have declined since 2011.

What are the limitations of China’s soft power?

China’s soaring economy has elevated the country as a model to be emulated, but there are multiple strains that threaten to undermine its image. Environmental pollution and degradation, food safety issues, overcapacity of state-owned enterprises, and Xi’s exhaustive anticorruption campaign are likely to dissuade others from following China’s example.

China’s soft power campaign is limited by the dissonance between the image that China aspires to project and the country’s actions, experts say. Rising nationalism, assertiveness vis-à-vis territorial disputes, crackdowns on nongovernmental organizations, censorship of domestic and international media, limits to the entry of foreign ideals, and political repression constrain China’s soft power. “If China’s narratives don’t address the country’s shortcomings, it becomes very hard to sell the idea of China as a purveyor of attractive values,” says CFR Senior Fellow Elizabeth C. Economy. Chinese culture and ideas have the potential to appeal worldwide, but only when there is “honesty in the depiction,” Economy adds.

Moreover, other experts have warned of the rise of authoritarian influence, dubbed “sharp power.” Authors of a 2017 report from the National Endowment for Democracy described the concept as “principally not about attraction or even persuasion; instead, it centers on distraction and manipulation.” Reports of entrenched Chinese influence in Australian and New Zealand politics, as well as attempts to pierce German business and political circles, triggered alarms across Western democracies in late 2017.

Ultimately, China’s tightening authoritarian political system is the biggest obstacle to the positive image the country and government yearn for. “So long as [China’s] political system denies, rather than enables, free human development, its propaganda efforts will face an uphill battle,” wrote David Shambaugh in Foreign Affairs in 2015. Without the free exchange of ideas and the ability of Chinese citizens to engage in open debate, the gap between the government’s portrayal and China’s reality will likely grow. “China will find it hard to win friends and influence nations so long as it muzzles its best advocates,” writes the Economist.

The Financial Times analyzes China’s attempts to boost its appeal around the world in a series called “China: The Soft Superpower.”

CFR’s Ely Ratner assessed the geostrategic drivers and implications of China’s BRI in testimony before the U.S.-China Economic and Security Commission in January 2018.

The National Endowment for Democracy examines Chinese and Russian influence in young democracies in a December 2017 report.

Aynne Kokas examines the U.S. film industry’s collaboration with Chinese investors in her 2017 book, Hollywood Made in China.

Game On: The NBA Runs Afoul of China but Scores Big