Some of you who saw my piece last month for the Globalist, “The Middle East’s Voracious  Hunger for Energy,” wondered if I could post some charts showing the data underlying the argument.  Here are three.

The piece argues that the Middle East’s rising oil consumption, driven by access to cheap government-subsidized oil, is becoming more central to global oil market fundamentals. These countries are facing a growing appetite for their own oil, which limits the amount they can export. Unless government leaders in the region chart a new course by addressing subsidies, the implications for their fiscal positions, as well as for world oil supply, are problematic.

As I explain in the piece: “Unlike the BRIC countries, the Middle East’s strong growth in demand for oil has mostly stayed under the radar. In the first decade of the 21st century, it rose by 56%, more than twice the increase seen across Latin American and Asian Pacific nations, and four times the global average. Although it was no match for China’s 90% growth, in absolute terms the region gulps close to as much oil (8.1 million barrels a day in 2011) as the Middle Kingdom does (9.7 million barrels a day), according to 2012 data in the BP Statistical Review of World Energy.”

So why the surging demand growth in the region? Population growth is part of the story. So is oil-driven electricity demand, notably in Saudi Arabia, where two thirds of power generated comes from direct crude burn. Add to that list consumers who enjoy ultra low fuel prices. All in all, energy demand per capita in the region has risen remarkably over the last few decades, and the size of the consumer base has expanded. 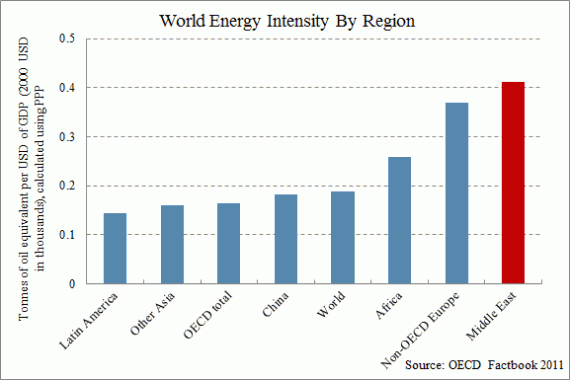 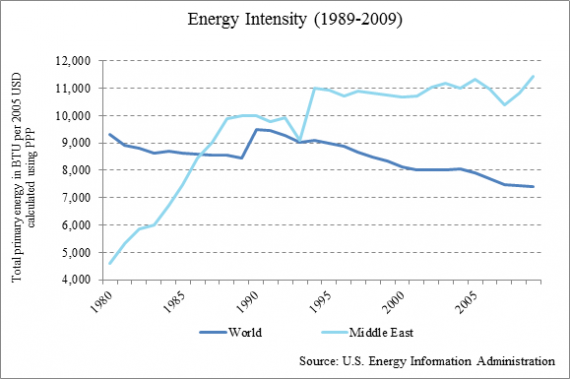 The Middle East’s growth in GDP per capita since 1971 has been more or less on par with several other parts of the developing world. 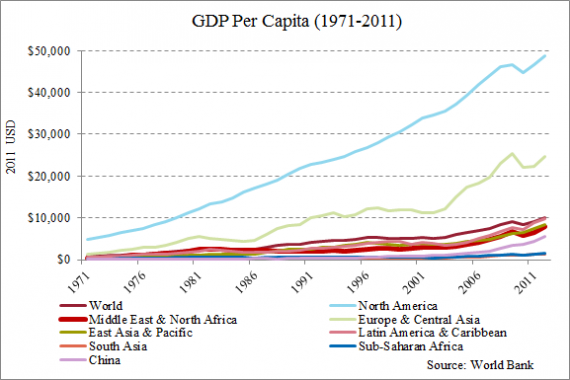 So the story appears in large part to be one of a region whose economy and energy mix has become more and more structurally dependant on cheap oil, thanks to public subsidies, and rising population growth.  Of the $192 billion of oil subsidies doled out around in the world in 2010, $121 billion of them were in OPEC, according to IEA figures. It’s astounding to consider that Saudi Arabia, for example, has an economy one-sixth the size of Germany and yet consumes as much oil. It never hurts oil demand growth when a gallon of gas costs less than a dollar, as it does in places like Kuwait and Saudi Arabia. But it can become a costly habit.