One important result of my theory about the sources of "dark matter" in the U.S. balance of payments is a concern that “border adjustment” might not generate the expected revenues. American multinationals would have a strong incentive to shift their offshore income on intellectual property rights that are now located in subsidiaries offshore back to the U.S..

A lot depends on the details of any proposed tax reform, but I think a firm with U.S. expenses and export revenues would generate a tax loss on its exports (export revenues are excluded from calculation of revenues for the purpose of the tax, and domestic expenses can be deducted). If that tax loss is refundable, exporters essentially get a check back from the government for a sum equal to their domestic labor costs (see Chad Bown on the “subsidy” component of a border tax adjustment).* Profits that now show up in subsidiaries in Ireland, Puerto Rico, Singapore, and the like** based on intellectual property that is held in the Caribbean, thanks to the low price headquarters charges for the global rights on their intellectual property, might show up back in the U.S.—and I suspect the royalties their offshore subsidiaries pay headquarters for research and design and engineering (e.g. exports) would soar.

I haven’t started to figure out how European companies that now report very little income on their direct investment in the U.S. might try to game the system. I suspect that they have an incentive to try to lower their reported intra-firm imports—e.g. reduce the transfer prices they charge their U.S. subsidiaries to lower their "border adjustment". Auerbach, Devereux, Keen and Vella have emphasized that introducing a destination based cash flow tax in one country would have quite different effects than introducing a destination based cash flow tax in all countries.

But I also wanted to draw out the implications of the rapid growth in the offshore profits of American companies for the broader debate on globalization.

Consider the following chart: normalized versus GDP, the “reinvested” (tax-deferred, or less politely, largely untaxed as of now) profits of U.S. multinationals have more than doubled over the past twenty years, while U.S. exports of capital goods, consumer goods, and autos (my measure for “core” manufacturing exports) have stayed constant as a share of GDP. Imports of that set of goods have increased by roughly 25 percent on this measure. 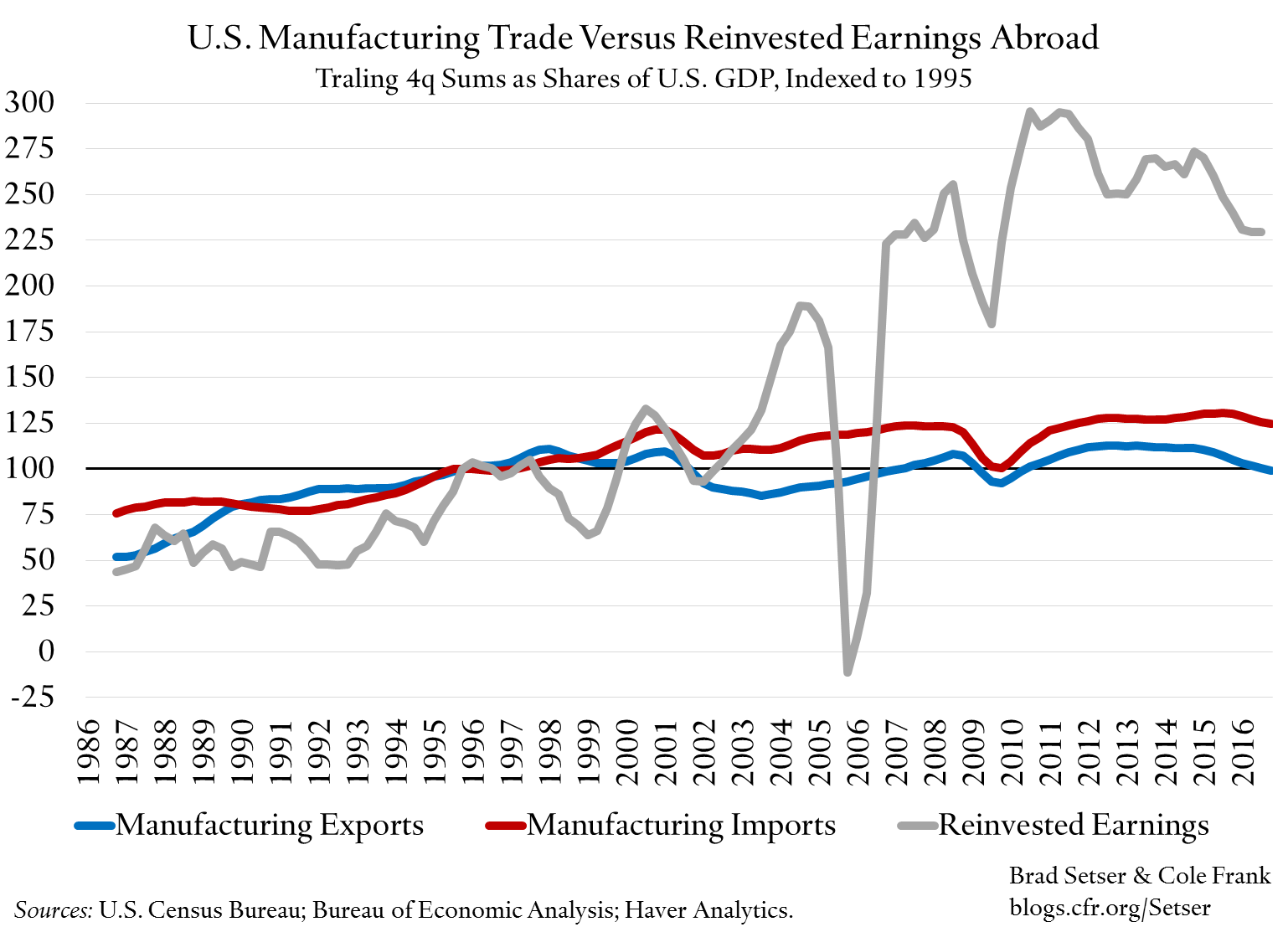 Obviously, setting the initial level at 100 exaggerates a bit to make a point—namely, that U.S. export and income “growth” from globalization shows up offshore, not in onshore export jobs.

As a share of GDP, reinvested earnings (a proxy for tax-deferred offshore earnings) have gone from 0.5 percent of GDP to around 1.6 percent of GDP over the past twenty years (they reached a peak of 2 percent of GDP when the dollar was weak).*** 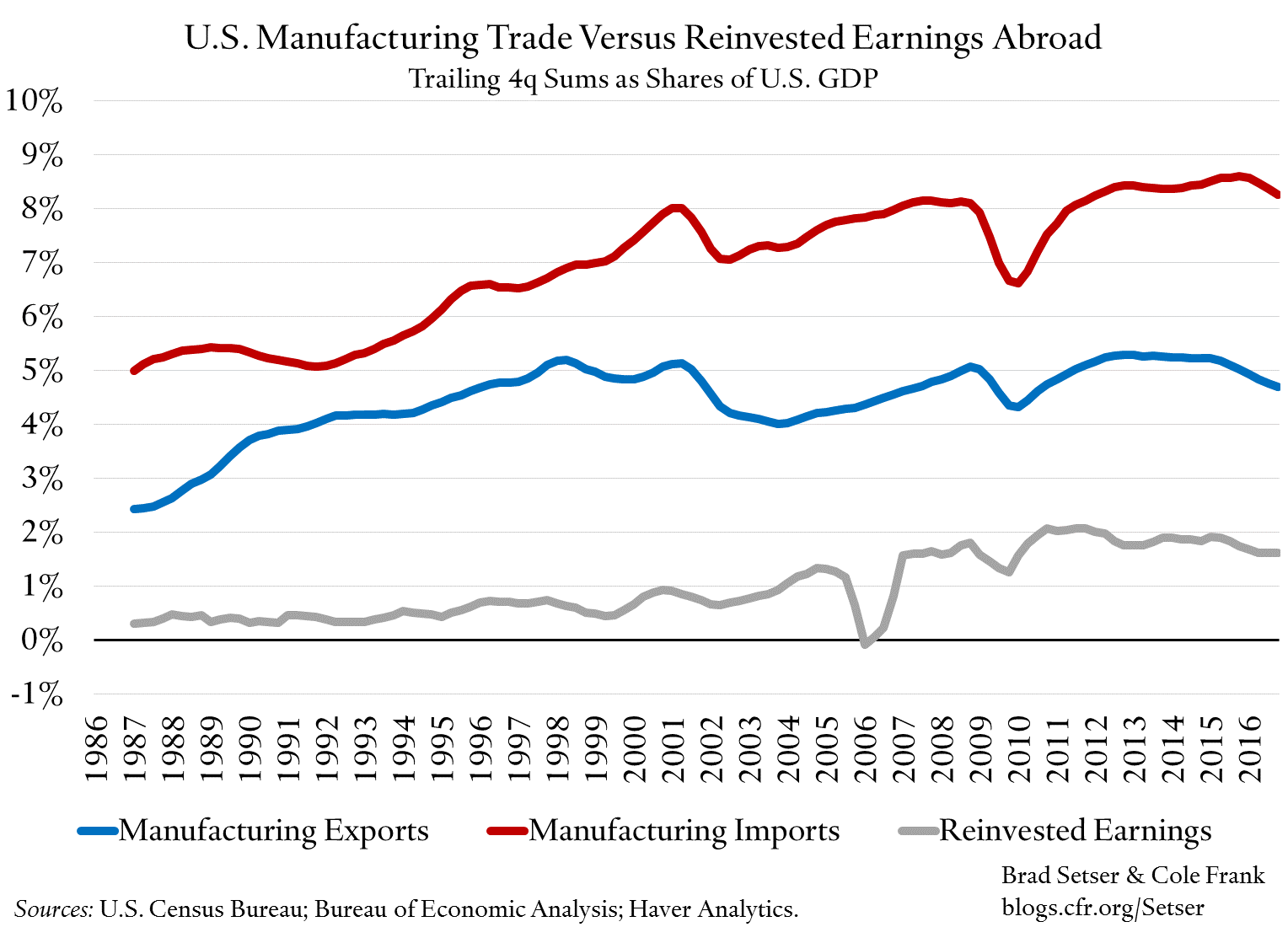 Core manufactured goods (autos, capital goods, and consumer goods—I am leaving out manufactured industrial supplies such as chemicals—largely for simplicity) exports have stayed constant at about 5 percent of GDP.

They were a bit higher for a while, but, well, something happened in the last couple of years. I tend to think that something was mostly the impact of the dollar’s rise but the global fall in demand for oil and mining equipment also played a role.

With rising productivity, a constant (and low) level of exports to GDP meant the export sector was shedding jobs.

I suspect the politics around trade would be a bit different in the U.S. if the goods-exporting sector had grown in parallel with imports.

That is one key difference between the U.S. and Germany. Manufacturing jobs fell during reunification—and Germany went through a difficult adjustment in the early 2000s. But over the last ten years the number of jobs in Germany’s export sector grew, keeping the number of people employed in manufacturing roughly constant over the last ten years even with rising productivity. Part of the “trade” adjustment was a shift from import-competing to exporting sectors, not just a shift out of the goods producing tradables sector. Of course, not everyone can run a German sized surplus in manufactures—but it seems likely the low U.S. share of manufacturing employment (relative to Germany and Japan) is in part a function of the size and persistence of the U.S. trade deficit in manufactures. (It is also in part a function of the fact that the U.S. no longer needs to trade manufactures for imported energy on any significant scale; the U.S. has more jobs in oil and gas production, for example, than Germany or Japan).

Of course, the sectors that have seen their offshore income grow rapidly are growing, and they do employ more people—though successful tech companies employ comparatively few people relative to their profits.

But the shift from an economy that pays for its imports by exporting goods to one that increasingly relies on the income its multinationals generate in offshore tax centers likely has had some significant distributional consequences.

And as I have argued before, I suspect that one of the problems the U.S. faces is that a significant share of the gains from globalization aren’t actually taxed, and thus aren’t directly available to fund the kind of programs that my colleague Ted Alden has suggested are needed to allow the workforce to adopt to various shocks more effectively. And I am not convinced a border adjustment—which I think solves the transfer price problem by exempting export revenue from any calculation of tax—solves this particular problem. I suspect effectively untaxed (permanently tax-deferred) profits offshore become untaxed export profits onshore.

** Puerto Rico is outside the United States for corporate tax purposes, thanks to its unique status. For details on Microsoft’s tax structure, see the Senate Investigative Committee report.

*** Foreign multinationals do not have big cash hoards in the U.S., so their “reinvested” U.S. profits have stayed roughly constant as a share of GDP, pushing the U.S. surplus on "reinvested" earnings up.

Dark Matter. Soon To Be Revealed?