Skip to main content
One Decade of Drone Strikes in Pakistan

In May 2002, Gen. John Keane, commander of the 101st Airborne Division, vowed: “We have broken their will and they are trying to establish another safe haven now in Pakistan...when the time is right, we will deal with that one as well.” Indeed, two years later, his prediction came to pass on June 17, 2004, when a Hellfire missile killed Taliban commander Nek Mohammed, beginning the CIA campaign of drone strikes in Pakistan that continues to this day. One decade later, the United States has conducted a total of 371 drone strikes in Pakistan, killing an estimated 2,878, of which 376 were civilians. 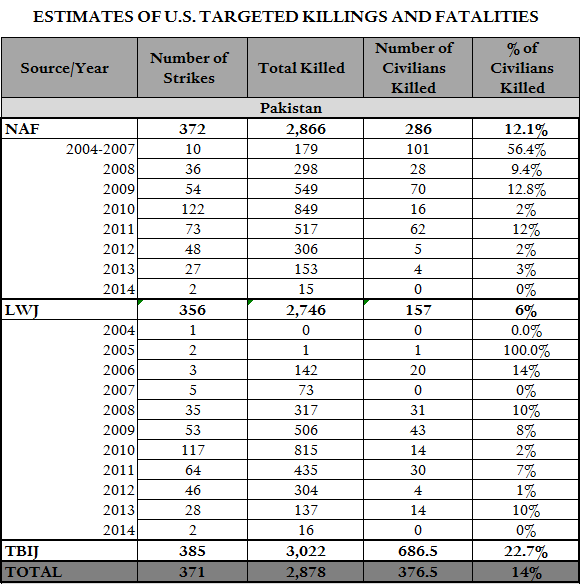 *Based on averages within the ranges provided by the New America Foundation (NAF), Long War Journal (LWJ), The

Congressional overseers and former CIA officials describe the estimates listed above as being roughly accurate, although the categorization of victims remains contested, based upon how one includes the practices of signature strikes. Interestingly, these databases do not include all of the drone strikes that were revealed by the reporting of Jonathan Landry, including a May 22, 2007 strike conducted at the request of the Inter-Services Intelligence Directorate (ISI), Pakistan’s spy agency, to support Pakistani troops. The numbers that have been provided by different arms of the Pakistani government at different times also vary widely.

After a six-month lull in early 2014, while it seemed drone strikes in Pakistan may be slowing, they began again on June 11. Bringing the first decade to a close on June 17, 2014, the United States will enter into its eleventh year of drone strikes in Pakistan. Never before in U.S. history has such a lengthy and lethal military campaign been so inadequately described or justified by the government, which retains the fiction that these strikes are “covert” and unworthy of public examination. The vast majority of congressional overseers and citizens concur.

What Would Air Strikes in Iraq Achieve?